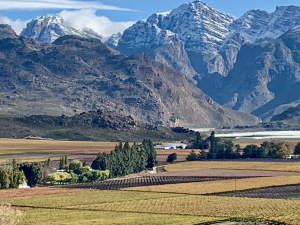 The frontal system that was our opening paragraph in last week's newsletter, deserved more than that. It delivered tons of snow. All the high mountains were draped in thick snow from the Cederberg to the Drakensberg. Temperatures plummeted with Johannesburg logging sub-zero temperatures. We used a gap between the two frontal systems to take a drive out to Ceres to capture some photos and videos of the action.

We have taken over the website and assets of Cape Mountain Passes. All those brown tourist boards displaying the vital statistics of 54 passes in the Western Cape will now be managed by MPSA, which includes the urls capemountainpasses.co.za, capemountainroutes.co.za and tablemountainroutes.co.za. The owner, Rod Douglas, of this long standing project has retired and gifted the project to us to ensure the hard work that went into the project will continue to be utilised by the public. We will start by cleaning up all the signs at the pass summit points - getting rid of the graffiti and patching the bullet holes and adding the MPSA signage. We will incorporate the CMP signage into our logo. There is also an entire geocaching section that goes with the project.

Our new logo and page headers are now live on the website. We think they are a nice improvement. Thanks to Lisa for the creative artwork and Jacques for the technical stuff.

Our routing did not disappoint. We drove over the old Du Toitskloof Pass where we saw some beautiful waterfalls, all flowing strongly. Along the stretch on the Worcester side of the tunnel the peaks were all dusted in snow, making for majestic photography.

Perhaps the best scenery was to be enjoyed just north of the Hex River Poort where the quilt-work of winter draped vineyards formed a perfect setting against a backdrop of snow capped mountains under a cobalt blue sky. We ran a short video over the scene, which has enjoyed an impressive view tally of 51000 views (at the time of writing).

There was surprisingly little snow on the Hex River Pass, but the Matroosberg mountains were under a thick layer of snow. We drove on to the junction of the N1 and the R46, where the road was closed and a traffic officer sat in his vehicle just behind the cones. Fully expecting to be turned away, we approached to ask permission to drive through to Ceres only to find the driver snuggled up and asleep. So we drove around the cones and along the R46 enjoying the ice cold Karooscapes topped off with white peaks in every direction.

At the junction of the R46 and the R355 we came across a second road block, but decided to rather take the short cut along the gravel road through the Matjiesrivier farm (a public road) and from there up the Bo Swaarmoed Pass where we arrived at the real snow fields. It was such a pretty sight.

The farm at the summit of the Bo Swaarmoed Pass is appropriately called Laastedrif. The plateau between this farm and the Klondike cherry farm is mostly above the 1200m contour line and there was more snow than what we've seen in any winter over the last decade. A few families had taken the time to play in the snow with toboggans and snowmen were being built at various points along the road.

We decided to retrace our route back to the Matjiesrivier farm and turn left to re-join the R46 at the foot of the Hottentots Kloof Pass, where the signboard incorrectly reads 'Theronsberg Pass'. There was surprisingly little snow along the road-side, but the mountains looked stunning. We got some great pics near the summit - one of which generated 58,000 views. The coldest temperature we measured was at the Erfdeel farm where the reading was 4C.