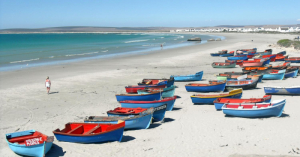 * Coldest winter in SA in decades.

Paternoster is one of the oldest fishing villages on the West Coast of South Africa. It is situated 15 km north-west of Vredenburg and 145 km north of Cape Town, at Cape Columbine between Saldanha Bay and St Helena Bay. The town covers an area of 194.8 hectare and has approximately 1883 inhabitants.

The origin of the name remains unknown. Many people believe that the name, which means ‘Our Father’ in Latin, refers to prayers said by Catholic Portuguese seamen when they became shipwrecked. It appears as St. Martins Paternoster on an old map of Pieter Mortier. Other people believe it refers to the beads that the Khoi tribe wore that were called Paternosters.

Paternoster is a sought after tourist destination and is known for lobster and the white-washed fishermen’s cottages. The remarkable coastline of jagged cliffs and white boulders makes this one of the most beautiful beaches on the West Coast of South Africa.

The area is a pillar in the South African commercial fishing industry. The town itself has a lobster factory and a newly erected Kabeljou farm, whilst the local people catch and sell herring, or draw mussels from the rocks. In the greater area are several more commercial activities, including deep sea fishing, snoek catching, abalone farming, oyster farming, canning of pilchards and mussel farming.

The oyster farm in the lagoon of the neighbouring town of Langebaan is currently the largest in South Africa. The West Coast rock lobster Jasus lalandii was enjoyed by the first Portuguese navigators. By 1902 a full-blown lobster industry was in operation, canning and exporting lobster to France in particular. The West Coast lobster industry generates millions each year and employs large numbers of the local people.