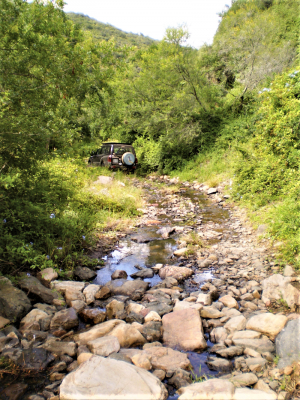 The next tour coming up is the Bedrogfontein Tour from July 3rd to 6th. A three day expedition over some of the most spectacular and tricky gravel passes in the Addo area, including the Zuurberg Pass, Doringnek Pass, Paardepoort and the Bedrogfontein Pass and 4x4 route where Oom Jannie Smuts gave the British a good lesson in bush warfare during the Battle of Bedrogfontein. There is still one spot open. Bookings close this Friday.

The next Wild Coast Tour (Nov 10th to 20th) is fully booked.

We are holding back on tours scheduled for August until we know which way the Covid 3 land lies.

The contractor (Baseline) doing the upgrading work on the historical Bain's Kloof Pass, have hit a number of snags, which will result in the previous reopening date of November 2021, being rescheduled to March 2022. During the Christmas break, the pass will be opened to the general public from Dec 17th 2021 to Jan 5th 2022. So if you've been missing a drive over the old pass, head out that way over the Christmas holidays. In the meantime, you can always take a cyber drive of the pass here:
Bain's Kloof Pass.

Our second last day of the tour dawned calm and sunny making for perfect conditions for vulture spotting. A visit to the vulture colony at Cobbywobbles is always a very popular part of the itinerary, but it can be a long day, so we requested an earlier start and had the convoy on the road by 08h30.

Before long we were in Willowvale where some of the vehicles needed to refuel. Our routing followed the R349 down the Shixini River Valley. This has always been a typical Transkei minor road of little economic importance, but some major roadworks are currently underway rebuilding this road into what looks like, will be a major tarred road. But why - and where does it go to? Careful studies of the maps show no possible reason for such a major expense. However, it will most certainly make the journey from Willowvale to Collywobbles a lot faster than it currently is.

The going was slow negotiating all the stop-go's and detours around the new roadworks as we saw some impressive new bridges under construction. Our route headed NNE as we dropped down into the beautiful Nqabara River Valley, before climbing up some very steep hills with incredible views, as we steadily made progress towards Collywobbles.