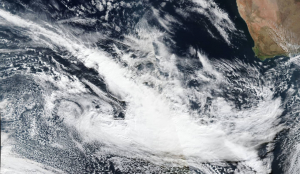 * How to refurbish roadsigns 101

* Tales from the Karoo

The third and most powerful of the major frontal systems this winter is scheduled to arrive in Cape Town today. Big snowfalls, gale force winds and heavy rain have been forecast. The system is forecast to reach as far north as Namibia. Expect snow on passes above 1000m altitude as well as road closures from Thursday till Monday.

If you're a storm-chaser, get your wellies and foul-weather gear and make sure your camera is waterproof. We'd love to see your pictures.

We ran up the first set of decals to refurbish the first of the summit signs of 54 passes in the Western Cape. I thought this would be an easy and pleasant task, getting me out the office and into nature where I am happiest, but I was in for a big surprise. Those road signs that we all take for granted involve a lot more effort to maintain than what most people think. They are very much bigger when you're standing 1m away. They are also subjects of much abuse. Illegal stickers, graffiti, bullet holes, malicious damage, rocks thrown at them. In short, they do not look pristine for long and require regular maintenance. The signs have been up for about 10 years.

I made up a pack list of gear I thought I would need - decals, scissors, marking pens, masking tape, methylated spirits, spray on soap, rags, bucket, fresh water, utility knife, ladder, safety vest and a whole lot more. For the first experiment, I knew it would take me longer than I expected.

First the whole sign had to be washed down. Then all non-official stickers had to be removed. Some of them were very stubborn and required a gas gun to heat-soften them. Glue residue is removed with meths and elbow grease. The thought did occur to me to send all the businesses that pasted decals on the signs an invoice for removal and cleaning! The surface is a spray painted brown surface. Removing old decals with a blade damages the spraypaint. You have to work very, very carefully.

The weather has to be good as well. Any mist, fog or rain and the decals will not adhere properly.

Then came the repair of the bullet holes. There were 10 holes clean through the metal (Chromadek) and many other others that were not powerful enough to pierce the metal, but enough to make a big dent. My original idea of filling the holes and then covering the front side with the brown vinyl was hopelessly optimistic. That would have been far too time consuming, impractical and expensive, so the holes are simply covered with a slightly oversized square of vinyl. The results are actually quite satisfactory.