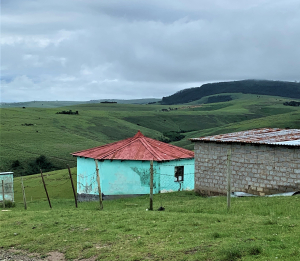 The Toleni Pass is named after the village and river that it traverses. It's located on the busy N2 route roughly 19 km to the south east of Butterworth. The pass is 6.8 km in length and displays an altitude variance of 244m with a maximum altitude at its northern summit of 720m ASL.

The road is well engineered and modern with 13 bends.corners and curves to contend with. As is the case with many of the passes in this part of the Eastern Cape, drivers need to be aware of livestoick on the road (this is particularly hazardous at night). Other hazards include minibus taxis, very slow moving traffic as well as very fast traffic. Mountain mists are also common here, which adds another element of danger.