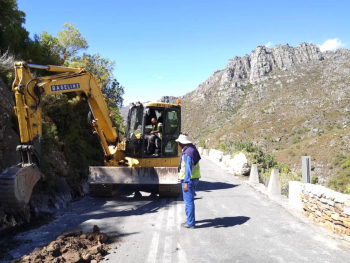 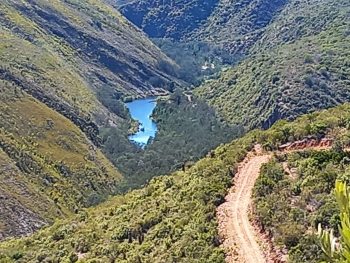 * Report back on the Kouga-Baviaans Tour

* Storm damage to the Gamkaskloof road

* Winter tours in the planning

The Kouga-Baviaans Tour was a marvellous success. We described the route in some detail in last week's newsletter, but some of the 'after the fact' highlights are worth mentioning.

Our convoy was made up of the following vehicles. Not one vehicle had any mechanical problems.

Day 1 involved a circular loop with an out and back 4x4 section thrown in for good measure. The weather was magnificent as we pulled up at Nico Ferreira's farmstead, where we were made to feel very welcome. Nico has advanced Parkinson's and is busy selling portions of the farm to make ends meet. His farm Kleinrivier uses the name Kouga Wilderness to attract visitors. There are cottages, camping facilities, a wedding venue, hiking trails and 4x4 routes on offer. 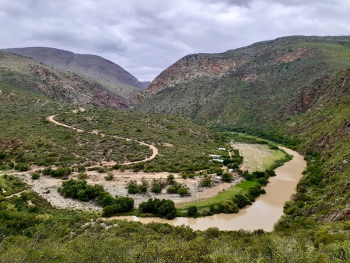 * Signage clean up (the good, the bad and the ugly)

As this newsletter hits the ether, we will be driving in the Kouga Wilderness with our guests on the Kouga Baviaans Tour, which was adequately described in last week's newsletter. For most of this tour we don't have cell reception, so report backs on social media will be limited.

The autumn season is a busy time for tours and also a perfect time of year to get out into the country. We have had a cancellation for our Ben 10 V4 Tour (March 31st to April 5th - Easter weekend). Anyone eager to take up that ticket can book online here:

It wasn't until I physically started with the road-sign campaign in person, that I realised the extent of the vandalism. Every sign that we clean, we photograph every individual sticker and then make contact with the companies, clubs and tour groups and appeal to them to refrain from the bad habit. Mostly we are met with positive responses, so we are encouraged and motivated to carry on with the good work. 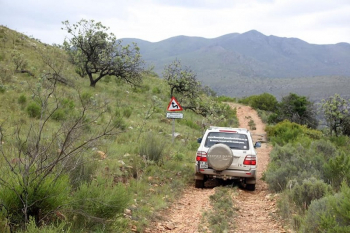 The reduction to Level 1 lockdown is a signal that this is the start of the revival of tourism. The damage done to small businesses in particular has been devastating, with countless of them having closed down and will unlikely ever recover again. We've heard of families losing their homes, vehicles and possessions as the strong arm of financial institutions do what they do, regardless of empathy. As we drive around South Africa, it's in the small towns where the aftermath of Covid is the most obvious. In many cases more than 50% of small businesses have closed down. The million dollar question is "Was it worth it?"

Yet, human beings are resilient and those with courage, will stand up, dust themselves off and rebuild their lives. When you plan your next road trip, please consider supporting small businesses. Each one of them supports a family.

Next week we depart on our Kouga-Baviaans Tour. The tour starts in Joubertina, which is also the principal town in the Langkloof. It's located on the Wabooms River, some 50 km north-west of Assegaaibos, 70 km south-east of Avontuur and 213 km from Port Elizabeth. Joubertina was founded and introduced into the Langkloof community in 1907. Having secured a portion of the farm Onzer, in between the villages of Krakeel and Twee Riviere (both founded in 1765), a property development was launched there under the initiative of the Dutch Reformed Church. As the sale of erven around a newly erected church building gradually got underway in 1907, the future town was named in honour of W A Joubert, minister of the Dutch Reformed Church in Uniondale between 1878 and 1893. The town has a station on the narrow gauge Avontuur Railway.

Our routing takes us through the Kouga Wilderness where we drive a two spoor track high up into the mountains to an amazing view-site with a lunch break spent on the shady banks of the Kleinrivier. We drive a circular route which includes two stunning gravel passes - the Kouga-Kleinrivier Pass and the Brakkloof Pass. We end up back at our starting point to enjoy the wonderful farm fresh food at Die Kraaltjie, which is our base for the first two nights.

The next morning we say farewell to the Langkloof as we head east on the R62, where the tar gives way to gravel once we turn off at Kareedouw and head west along one of the most enchanting gravel roads that include the Suuranysberg Pass, the Kouga River Pass, Moordenaarskloof and Meidenek, which brings us Rob le Roux's hidden gem - the Baviaans Lodge. This is a very remote lodge hidden amongst the trees at the bottom of a narrow valley, filled with wildlife, rock art, history and natural beauty. If you're looking for a marvellous getaway for a few days, you can contact Rob on 083 491 1009 on Whats App only. Leave a message and he'll call you back. Rob is a walking encyclopaedia on the area and will take you to the best rock pools, waterfalls and San art. There are 4 cottages to let and the food at the lodge is delicious.

From the lodge we begin the major traverse of the Kouga Mountains. It starts with a big climb and ends almost an hour later at the top of the first mountain range. The hillsides are smothered in proteas, whilst cycads grow naturally on the higher slopes. At the top of this climb we visit the crash site where Katot Meyer (a tough character and serious local naturalist) once lost his Land Rover down this krantz by forgetting to engage the handbrake. The story really comes to life when you're standing on the same spot and can experience the steepness of the terrain. 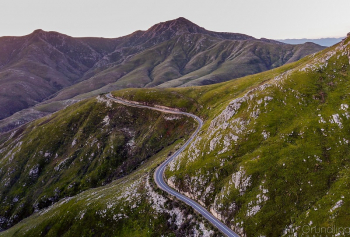 Covid 19 has changed the face of tourism. It's going to be a long time before things return to what they were before. For those businesses that catered only for the overseas market, it's going to a major adjustment trying to capture the local market, which is tough and demanding when it comes to value for money. Those businesses that have always aimed at the local market will benefit from increased bookings from South Africans who can no longer travel overseas and are now rediscovering South Africa. Every business in the tourism sector will need to adapt and innovate.

We believe this trend is here to stay for a long time. With all the hoops and hurdles one has to jump through on an overseas trip, a local trip is just so much more attractive.

Born in Johannesburg, Player was educated at St. John’s College, Johannesburg, South Africa and served in the 6th Armoured Division attached to the American 5th Army in Italy 1944–46.

His conservation career started with the Natal Parks Board in 1952 and whilst Warden of the Umfolozi Game Reserve, he spearheaded two key initiatives:

Dr. Player was the Founder of the Wilderness Leadership School, which still runs the original wilderness trails to this day.

Amongst many orders and awards he counts Knight of the Order of the Golden Ark and the Decoration for Meritorious Service (the highest Republic of South African civilian award).

He was the recipient of two honorary doctorates:

Player died on 30 November 2014 of a stroke. He was the brother of professional golfer Gary Player.

His archives and legacy are owned and managed by his nephew Marc Player, who has initiated several projects including books (Into the River of Life) a feature-length movie, a TV series built around Operation Rhino and the PLAYER INDABA which seeks global "PLAYERS' to raise funds to fight the extension of various threatened animal species. 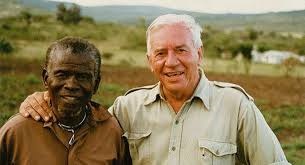 The famous movie director and producer Howard Hawks, wanted a movie about people who catch animals in Africa for zoos, a dangerous profession with exciting scenes the likes of which had never been seen on-screen before. The name of his blockbuster movie is Hatari!, starring John Wayne. Hawks increased his knowledge on animal catching from the humane work of Dr.Player. In 1952 South Africa was disastrously embarked to eliminate all large wild animals to protect livestock, and only 300 white rhinos survived. Player then started his famed rhino catching technique to relocate and save the white rhinos. Player’s humane project was called Operation Rhino and the renowned film documentary named Operation Rhino was produced. Hawks studied this film documentary repeatedly to help incorporate aspects of it into his film Hatari!.

In June 1964, Player appeared on the panel show To Tell the Truth as himself, highlighting his role as warden of Hluhluwe–Imfolozi Park and his work protecting white rhinos. Host Bud Collyer noted that scenes of white rhinos shown at the beginning of the episode were from Ivan Tors' movie Rhino!, released a few weeks earlier, and for which Player acted as a technical advisor.