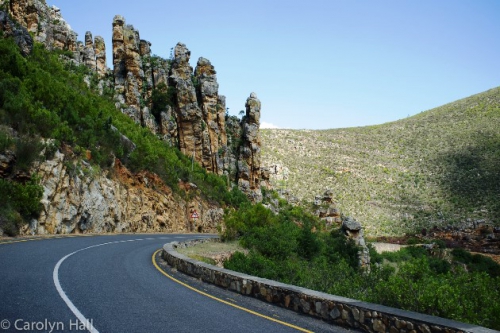 The most photographed rock formation on the pass - Photo: Carolyn Hall

Week after week we dig into our treasure chest of mountain passes and take you into every corner of our beautiful and diverse country, as we introduce you to remote or forgotten passes and at other times we reawaken your interest in a well known or famous pass, where no matter how many times you travel it, it remains an absolute joy.

Our featured this week, is one of the latter. It was originally built by Thomas Bain and ranks as one of his best passes in terms of technical ingenuity. We recently refilmed this exceptionally lovely pass and bring it back to you today as fresh as a Namaqualand daisy in HD in a three part video set, covering every aspect of the pass, from technical engineering to history to tourism information.

We rate this pass amongst the Top 10 passes in the Western Cape and in the Top 20 nationally.

In the period around 1850 farmers in the Swellendam and Barrydale area had issues getting their produce to market, so a local businessman, John Barry (after whom the town of Barrydale was named) opened up a small harbour called Port Beaufort at the mouth of the Breede River. From there goods could be shipped to Cape Town far quicker than by oxwagon. But the problem was that the farmers in the Barrydale area needed a good road to reach the port and in 1867 the authorities approved funds for a road to be built between Swellendam and Barrydale over the Langeberg mountains.

They had no hesitation in calling on master pass builder Thomas Bain, to peg the lines and build the pass. Convict labour numbering around 300, provided the workforce and Bain built a magniificent pass through the mountains. The pass was originally named the Southey Pass, but the locals didn't like the name and reverted to the Tradouw Pass.

The pass has suffered severe flood damage over the last 130 years, once requiring Bain to raise a whole section of the road higher above the flood level. During a major revamp in 1979, the road was completely rebuilt, still using some of Bain's original lines, but in other places, more acceptable gradients and easier corners were introduced by the engineering team who masterfully retained the stone walled look of Bain's old pass, whilst meticulously preserving the fynbos along the route.

The Tradouw Pass is today a much revered mountain pass, that offers the entire spectrum of features that a great mountain pass exhibits. It's long at 16,7 km and has an altitude variance of  215m with multiple bends, corners and curves and over 25 picnic and view sites to enjoy the rock pools and waterfalls as the road follows the course southwards above the Tradouw River.

Take the click through link below and relive this wonderful mountain pass. It's one of a kind!

Thought for the day: "Take a road trip. It's good for you"