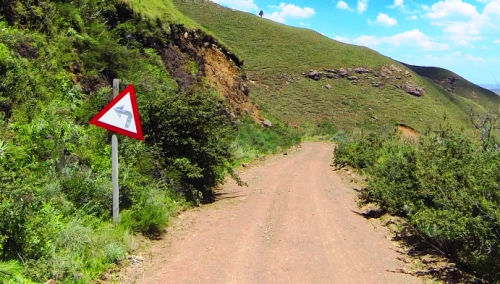 The month of March is almost history and it's been a month of breaking new ground. We have just reached our highest ever readership on this website with 108,000 page views so far for a single month and our FaceBook feature on the Langeni Pass last week, was viewed  72,490 times, generating 2,300 Likes, 128 shares and 143 interactive comments. Of interest was the number of people involved in the construction who posted relevant and fascinating comments.

We are honoured to have been nominated for an award by the Western Cape Government Department of Cultural Affairs in the category 'Standardisation and/or Public Awareness of Geographical Names' and we thank everyone who posted messages of congratulations and encouragement on the Face Book entry. More on the award lower down this page...

We had the first lady, Llesyri Joa, completing the Ben 10 Eco Challenge on an adventure motorcycle, thereby setting the bar not only for other ladies, but for the guys as well. The top 10 places for the challenge have now been booked in perpetuity and can be seen on the website, where the entry form is also available. Ben 10 Eco Challenge - Results and Entry Form.

As an incentive for those sitting on the fence and a reward for those that have already subscribed, we will be drawing the name of one lucky subscriber to win a GoPro4 Silver video camera. This will take place after the 31st August, when the incentive offer closes. Subscribe on this link for just R200 per year. MPSA - SUBSCRIBE

Wild Coast Radio in East London have us live on air, every Monday at 3.30pm for a 10 minute mountain pass talk. We will be posting the podcasts of these interesting chats on the website as soon as we receive them.

Our featured pass this week is one of the passes of the Ben 10 Eco-Challenge and ranks as one of our personal favourites for its wonderful scenery, big altitude and general enjoyment. It offers waterfalls, a challenging drive, complete isolation and some of the finest Southern Drakensberg scenery you will find. We plan on keeping the featured pass 'open' each week for a day or two, to illustrate to potential subscribers the value that they can enjoy.

Demographics and Analytics
So who exactly reads MPSA information? We always find these statistics interesting its important to know this in terms of writing and producing video material. Our youngest viewers tend to start at the age of 25 and our oldest are over 90. The split between male and female is 54% / 46%  and the viewership is concentrated in the major metropolitan areas. About 2% of the total viewership is from overseas. Our biggest fans overseas are the expats - who get terribly homesick when watching the videos. All race groups follow the website, with that dynamic always in a state of flux depending on which part of South Africa is currently under the spotlight.

We have 11,705 people that follow our Face Book page and we have a proud record of producing a 100% response to comments within 24 hours. We take these analytics seriously as it helps us to know what pictures to post and what the general public want to see, or find interesting. Interaction with readers is a sure barometer of whether we are doing things right or not.

Did you know that we have kept 5 major passes open to everyone? These are the Sani, Swartberg, Gamkaskloof/Die Hel, Bainskloof and Prince Alfreds Passes. The concept is to allow those who are unsure about subscribing to explore the full power of the website, before investing that R200. In addition, we have opened the featured pass of the week in the same manner for the first 48 hours after the news release each Thursday. This is an experimental phase, which might be lengthened or shortened once we establish a viewership-subscription pattern.

The Western Cape Government awards ceremony was a formal affair which took place last Saturday at the Lord Charles Hotel in Somerset West. Whilst this is not an Oscar or a Grammy, it opens the doors for bigger things and it is good to know that local government recognises our tourism contribution to not only the Western Cape, but the whole of South Africa. Whilst MPSA was a nominee, the award itself went to Peter Slingsby, that producer of quality maps, who we were more than happy to step aside for. His cartography work is legendary and he has produced many maps, with a specific focus on the Western Cape. We thought he was a worthy winner.

A giant of a mountain pass

Back in 1959 the authorities gave the nod to build a gravel road over the Drakensberg between the tiny settlements of Ida and Clifford in the Eastern Cape, about 40 km north-west of Elliot. The result was a rather spectacular road that climbs almost 700m through multiple bends, forests and grassy plains to reach the summit of 2115m ASL. A picnic table and chairs are on offer at the summit, where you can drink in the massive views over the Drakensberg and Tsomo Valley.

We rate this as one of our Top 20 passes nationally for its overall enjoyment as it offers solitude, interesting and sometimes challenging driving, magnificent scenery, birdlife and an opportunity to get away from the madding crowd. We refilmed the pass during December, 2016 in near perfect weather and offer two videos on this great road. This is the final revamped pass of the Ben 10 Eco-Challenge, which was specially refilmed for up to date videography and information for those doing the challenge. Take the link below and enjoy this wonderful drive.

Thought for the day: "Carpe Diem - Sieze the Opportunity"