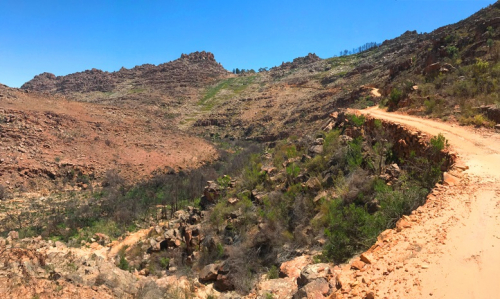 * Back to school/back to work

It's back to school and back to work (and traffic congestion) for the vast number of South Africans this week as the year 2019 settles down to some semblance of normality.

Our pass of the week is a most unusual one in many ways. Not only does it require the driving of a partially deproclaimed road to get there, but the road in question was hacked out of the mountainside in the years 1940 to 1945, ostensibly for the use of ox-wagons. The construction work was carried out by a small group of enterprising farmers, who toiled through seven cold winters to build the precarious road from the Koue Bokkeveld down into the secluded valley in the southern Cederberg. [More lower down...]

The featured pass today impressed us so much that we created a special tour with it being the anchor pass and one we are confident will be thoroughly enjoyed and appreciated by our guests. We thought of calling this one the Vertigo Tour as at least four of the six passes have very steep drop-offs not suitable for those that suffer from acrophobia.

We always try to release new tours on a Thursday in conjunction with this newsletter, to give our subscribers first opportunity to book a place. As is the case with many of our tours, we get special permission to enter roads and areas not normally accessible by the public. This tour will be unforgettable. Our tours are booked out in short order, so if you live in the Western Cape, book online here: Southern Cederberg Tour

Our Excel expert, Mike Leicester has just released the latest version of our passes planning spreadsheet, which now contains just over 1100 meticulously researched passes and poorts. We have 816 indexed on the website, so the variance is what we still have to produce. The planner can be used offline (i.e. on a device like an iPad or laptop in your vehicle) but with basic functionality. As soon as you are connected to the internet, the full power of the planner comes to the fore. This invaluable document is available from our online shop at R285. FACTS & STATS PASS PLANNER

Towards the Christmas holidays each year and continuing through to April, we have an upsurge in Ben 10 entries. It seems that this challenge (dreamt up whilst filming the Volunteershoek Pass way back in 2012) has become so popular, as to have become THE adventure challenge in South Africa.

All sorts of records have been set up. The first lady on a motorcycle; the youngest person (passenger); the first dog; the first parrot; the oldest driver; the first MTB; the first lady MTB rider; the first father and daughter cycling combo; the first on a homemade bicycle and perhaps the most bizarre one - the first person to complete all 10 passes in a single day. This is of course not in the spirit of the challenge as we never intended it to be a race, but it is nonetheless one heck of an achievement. There are still two vacant titles going begging: The first trail runner and the first walker.

To date 120 people have entered the challenge, but only 51 have managed to successfully complete it. Most people struggle with Bastervoetpad and Ben MacDhui passes and many motorcyclists come short on Volunteershoek. The challenge is not nearly as easy as some people think. Are you up to it? There is no closing date on the challenge, so make the decision and enter. You only have one life, live it!

The Ben 10 Tour remains fully booked and although we have had one cancellation, the available spot was immediately taken up. 12 vehicles and 2 motorcycles plus two guide vehicles will make up a 16 strong team, which will be split into two groups, each driving different routes over the four days. The motorcycles will ride ahead and independently of the 4x4's. The excitement is building as this promises to be a tour of note. We will be watching the weather forecasts with bated breath!

Our Face Book page continues to remain hugely popular amassing around 50,000 views per month. We try to be as innovative as possible and vary our content over a range of themes in an effort to remain topical and interesting. The face of social media changes rapidly with new ideas emerging almost weekly. Last week we decided to feature a theme called "Only in Africa" - a series of humorous photos of all the silly things that we all see daily in Africa. The posts proved enormously popular, achieving results about 5 times better than our normal posts, but with it came some criticism, which only goes to show that you simply cannot please everyone all of the time. I suppose to expect 100% smiley face rate, would be abnormal.

Listen to the podcast

This week we manged to coincide our featured pass of the week with the podcast. A 10 minute conversation focused on the Piet Esterhuysen Pass.

Our pass of the week is the Piet Esterhuysen Pass - a short pass (north of Op die Berg) at 2,4 km , but it packs an almighty wallop into that distance. It's narrow, rocky, rugged, slow, gravel and offers sensational views. It's also a dead-end and leads down to a camping site on a private farm - Balies Gat. Check it out and try the cyber option via our 3 videos filmed just two weeks ago. Then draw that bucket closer, get your camping gear ready and grab yourself some quality leisure time (with a dollop of adrenaline thrown in).