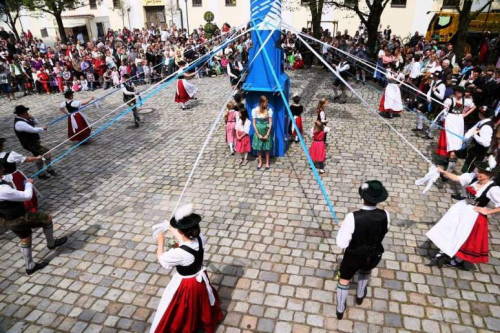 Although later practices varied widely, the celebrations came to include the gathering of wildflowers and green branches, the weaving of floral garlands, the crowning of a May king and queen, and the setting up of a decorated May tree, or Maypole, around which people danced. Such rites originally may have been intended to ensure fertility for crops and, by extension, for livestock and humans, but in most cases this significance was gradually lost, so that the practices survived largely as popular festivities.

Among the many superstitions associated with May Day was the belief that washing the face with dew on the morning of May 1 would beautify the skin. Because the Puritans of New England considered the celebrations of May Day to be licentious and pagan, they forbade its observance, and the holiday never became an important part of American culture. In the 20th century, traditional May Day celebrations declined in many countries as May 1 became associated with the international holiday honouring workers and the labour movement

Mayday! When the space between the two words is removed it has an altogether different meaning. Mayday is an emergency procedure word used internationally as a distress signal in voice-procedure radio communications.

It is used to signal a life-threatening emergency primarily by aviators and mariners, but in some countries local organizations such as firefighters, police forces, and transportation organizations also use the term. The call is always given three times in a row ("Mayday mayday mayday") to prevent its being mistaken for some similar-sounding phrase under noisy conditions, and to distinguish an actual mayday call from a message about a mayday call.

The "mayday" procedure word originated in 1923, by a senior radio officer at Croydon Airport in London. The officer, Frederick Stanley Mockford, was asked to think of a word that would indicate distress and would easily be understood by all pilots and ground staff in an emergency. Since much of the traffic at the time was between Croydon and Le Bourget Airport in Paris, he proposed the expression "mayday" from the French m'aider ('help me'), a shortened form of venez m'aider ('come and help me'). It is unrelated to the holiday May Day.

And that brings us to what happens when your vehicle breaks down in a remote place? There is no mobile reception and the weather has turned nasty. Many people prefer driving with a small group of friends in a convoy in the interests of safety but just as many prefer the pleasure of solitude. If you are one of the latter group, you should seriously consider getting yourself a satellite phone (which will work everywhere except in a tunnel). They are quite expensive to purchase, so if you are only doing the odd remote journey, maybe just hire one as needed.

One of our subscribers, Phillip Wantling, related a story of when he was near the summit of the Attekwaskloof 4x4 Route. Driving alone (as he often does) he saw the perfect photograph. He got out of his Nissan Navara to take the photo and then heard the ominous sound of tyres on gravel. He had not engaged the handbrake fully and the bakkie was starting to roll down the hill backwards. He sprinted back to the drivers door, yanked it open and in his haste to get back in, his foot slipped and it went under the right front wheel, ripping ligaments. In agony, he clawed his way back into the vehicle and managed to bring it to a stop. What followed was a terrible ordeal trying to drive his (manual) Nissan all the way to Mossel Bay to get help. From that day he always drives with a satphone. So if you are a loner, take the necessary precautions and don't become a statistic.

Doringkloof Pass (P363) - An obscure but lovely gravel pass on a farm road north-east of Calitzdorp.

Beestekraalnek (N6) - A minor tarred pass near Rouxville in the Free State.

Thought for the day: "Sometimes later becomes never. DO IT NOW!" ~ Anonymous