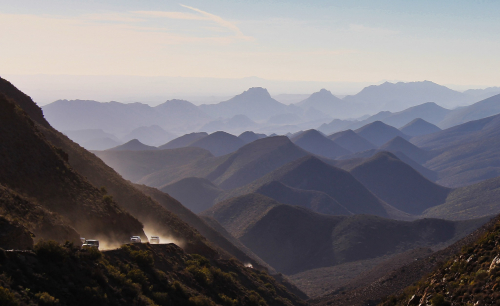 This in turn affects our radio transmissions and in mountainous sections those at the rear of the convoy don't receive clear comms. It's an unusual circumstance to have no wind for 3 days in the Western Cape and gravel travel will always (other than during or after rain) produce dust. Some interesting debate followed on Face Book with our understanding of reducing dust ingress, to close all windows, switch the airvents to recirculate and turn the fan on, being challenged. The theory is that a high pressure will develope inside the vehicle and prevent dust from entering.

'Not so', say some engineering types, who insist that the action of running the fan simply warms the air and has no effect on pressure. In caravanning circles it is a known technique to leave a front window slightly open to build positive pressure inside the caravan and so prevent dust ingress. We've never been brave enough to try that one! If you have an opinion on this, feel free to drop us a line at This email address is being protected from spambots. You need JavaScript enabled to view it.

Ladismith is a lovely town well known for its cheeses and the distinctive cleft mountain known as Towerkop - a place of legends and spooky stories of  angry witches hell bent on destroying the mountain and the universe. Our route left the R62 at that point and we routed via the beautiful Hoekoe Valley Road - not really a mountain pass, but an impressively scenic detour in the foothills of the mountains north of Ladismith, where we passed a sign marked "Oom Stanley se Liggie" A local adventurer hauled a bag of irrigation pipes, a bicycle dynamo and light and some tools to the top of the mountain where he rigged up a simple water mill in a perennial stream to power his dynamo. The light shines down on the town of Ladismith 24 hours a day and has become one of the more interesting local stories. Check it out - Stanley's Light. Local farmers check the light's intensity to gauge the flow of water from the mountain. Cool eh?

From the Hoekoe Valley we drove to Zoar and then located the old Lutheran mission church at Amalienstein which dates back to 1893. The building has been lovingly restored and made for an interesting stop, where the caretaker offered to open the church for our group.

The highlight for the first day was Seweweekspoort, where we stopped briefly at the Tierkloof Dam and encouraged our guests to climb the steep steps up the dam wall to enjoy the view from the top and also just to get in a good leg stretch after a long day in the car.

Seweweekspoort is always a delight with its incredible geology and mesmerising scenery and then finally we commenced the long descent down Adam De Smidt's atmospheric Bosluiskloof Pass. For those of our guests that had never been on it before, some claimed that the so-called 'forgotten pass' was their outright favourite. There is one specific point where the mountains form a V shaped cleft with the lower merengue shaped hills sprawling off into the distance. It's the classic Bosluiskloof view and is used as the logo for the lodge.

The 4 star Bosch Luys Kloof Lodge is one of our favourites and our visit was full of surprises. From ice cold beers at the pool deck, to a stunning sunset, followed immediately a full-moon. One of our guests, Ed Johnson from East London, casually produced a guitar from nowhere and with a harmonica around his neck, we had our own one man band. Ed is a very good musician and played a selection of songs, from blues to folk to country including some of his own excellent material. We can't always guarantee these surprises, but sometimes they just happen spontaneously.

Dinner at the lodge was magical and that butternut soup was just out of this world. Next week we take you along another secret route to the Swartberg Pass.

We have logged the first 5 passes on the new Lesotho chapter. Our first fiming will be done during our Lesotho-Sani Tour in September. 2019. There are still 3 places left if you want to join this high altitude tour and one of the last opportunities to drive Sani Pass whilst it's still gravel. Book online here. Lesotho-Sani Tour.

Ben 10 Eco Challenge V2 Tour - Although there are still  4 months to go, if you are planning on booking for this amazing tour, please get your bookings done as soon as possible. We have revised this tour to reduce the daily distances, yet still complete the challenge and have more time for photography, socialising and leisure activities. 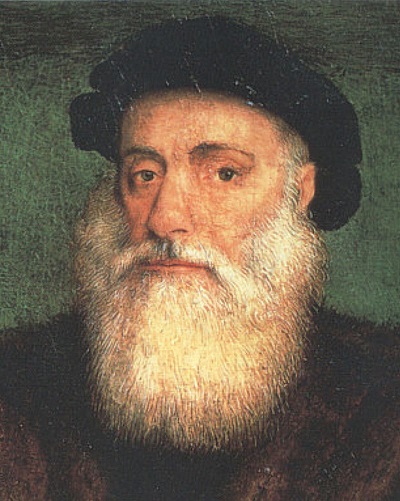 A Portuguese mariner named Bartolomeu Dias became the first European to explore the coastline of South Africa in 1488, whilst attempting to discover a trade route to the Far East via the southern cape of Africa, which he named Cabo das Tormentas (meaning “Cape of Storms”). Dias's expedition reached its furthest point on 12 March 1488 when they anchored at Kwaaihoek, near the mouth of the Boesmans River. He wanted to continue his voyage, but was forced to abandon when his crew refused to go any further and the rest of his officers unanimously favoured returning to Portugal.

In November 1497, a fleet of Portuguese ships under the command of Vasco da Gama rounded the Cape of Good Hope. On 16 December, the fleet sailed past the point where Dias had earlier turned back. Da Gama gave the name “Natal” to the coast he was passing, which in Portuguese means “Christmas”. His fleet proceeded northwards to Zanzibar and later sailed eastwards, eventually reaching India and thereby opening up a new trade route between Europe and Asia. Da Gama returned to Lisbon on 29 August 1499, where he was given a hero’s welcome.

Da Gama's discovery of the sea route to India was significant and opened the way for an age of global imperialism and for the Portuguese to establish a long-lasting colonial empire in Asia. Traveling the ocean route allowed the Portuguese to avoid sailing across the highly disputed Mediterranean and traversing the dangerous Arabian Peninsula. The sum of the distances covered in the outward and return voyages made this expedition the longest ocean voyage ever made up to that time, much further than a full voyage around the world by way of the Equator.

Ed Note  - Next week we explore the arrival of the Dutch settlers.

Featured Pass of the Week:

Thought for the day: "The real voyage of discovery consists not in seeking new landscapes, but in having new eyes" ~ Marcel Proust