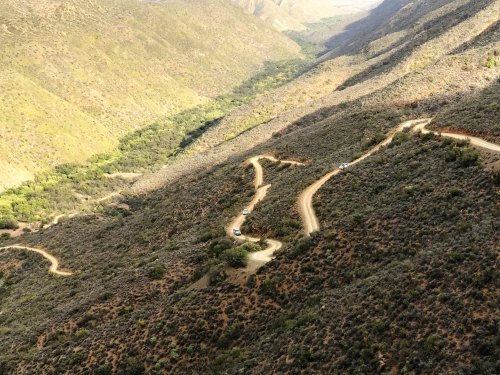 We had the pleasure of a second traverse of Seweweekspoort, but in much better light and the poort somehow always manages to be spectacular beyond words. Soon we are back on tar for the haul over the Huisrivier Pass with its pioneering engineering. This was one of the first passes to make use of concrete catch walls with a gap on the mountain side to prevent rocks falling on the roadway. This pass was surveyed by the late Dr. Graham Ross. It was a huge project where the surveying and planning alone took ten years. Amongst the new techniques experimented with was to pump water into the fissures to create a landslide and so move many tons of material down-slope quickly and efficiently. The construction crew had some narrow escapes when rocks the size of cars would come hurtling down the mountainside, sending the men running for their lives. The temporary detour created during the build phase was one of the longest ever created in South Africa in the good old days before stop/go's. It can still be traced on Google Earth. Today this beautful pass can be enjoyed on a wide, smooth road with numerous picnic spots for travellers.

Calitzdorp is famous for its port wines. We stopped briefly to refuel and were soon on our way along the Groenfontein road - a slow, winding gravel road that cuts inland past the Calitzdorp dam and on towards Kruisrivierpoort. You will be forgiven if you forget that this is supposed to be the Klein Karoo as this road traverses an exceptionally lush and fertile valley, peppered with green orchards, dense bush, tall trees and some beautiful historic buildings. One of these is the old Post Office. This is a place where artists and writers spend their time. A highly recommended route.

Purely by coincidence our planned route was also the routing of a cycle race, which meant 11 vehicle's dust had to be endured by the cyclists, as we slowly worked our way through the groups. We could not have been popular with the cyclists!

Finally we arrived at Cobus se Gat (famous for their heavenly 'skilpadjies') - for a lunch break at the foot of the Swartberg Pass and by 2.30 pm we were at the summit enjoying an unusually warm and calm day. I have been at that summit point many times in my life, but on this tour the weather was remarkably good. To be continued next week.

At MPSA we spend around 3 to 4 hours each and every day (7 days a week) promoting the website. Each month we take a careful look at the effort we put in versus the return on effort. Some of the statistics for May make for interesting reading:

We have approximately 19,300 followers, but it seems highly unlikely that every post we put out is received by all of those followers. Understanding Facebook's mysterious and ever changing algorithms is a real challenge.

Instagram is an up and coming method much more popular with younger viewers. We post on average once every second day but interaction on Instagram is much lower than on Facebook. We're working on it!

The latest information siphoning down from the USA is that Facebook is once again making major changes, with the current news that posts will only remain on the platform for a limited time (2 to 3 days) and will then disappear. For small and large businesses who have changed their advertising mix from print to social media, this will mean a serious change - especially for those SME's that have online shops with Facebook. Time will tell.

This week's podcast covers the second section of the Great Swartberg Tour. CLICK TO LISTEN 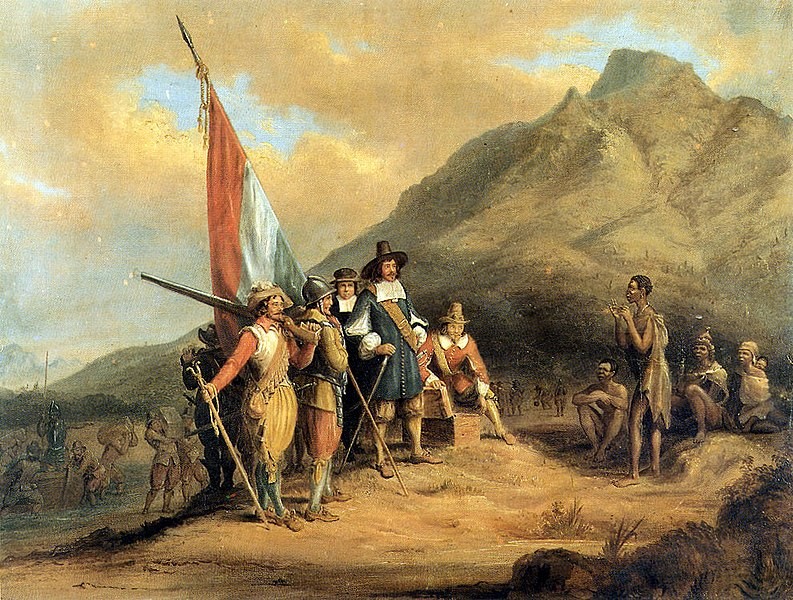 Van Riebeeck landing at the Cape (painting by Charles Bell)

The Dutch East India Company (Vereenigde Oostindische Compagnie, or VOC) decided to establish a permanent settlement at the Cape. The VOC originally had no intention of colonising the area, instead wanting only to establish a secure base where passing ships could shelter and be serviced, and where hungry sailors could stock up on fresh supplies. To this end, a small VOC expedition under the command of Jan van Riebeeck reached Table Bay on 6 April 1652.

The VOC had settled at the Cape in order to supply their ships, but the local Khoikhoi eventually stopped trading with the Dutch, and the VOC had to import farmers from their home country to establish smallholdings that would replenish the passing ships and support the growing settlement. The small initial group of free burghers, as these farmers were known, steadily increased in number, and they began to expand their farms further to the north and east.

The majority of burghers had Dutch ancestry and belonged to the Dutch Reformed Church, but there were also some Germans, mostly of the Lutheran faith. In 1688, the Dutch and Germans were joined by French Huguenots, who were Calvinist Protestants fleeing religious persecution in France under its Catholic ruler, King Louis XIV.

Van Riebeeck was under strict instructions not to enslave the local Khoikhoi and San aboriginals, so the VOC began to import large numbers of slaves, primarily from the Dutch colonies in Indonesia. The offspring from miscegenation between the settlers and the Khoisan and Malay slaves became known officially as the Cape Coloureds and the Cape Malays respectively.

Next week: British occupation of the Cape Colony

Featured Pass of the Week:

Notched between the craggy mountains  near Prieska and the Kalahari is a fine gravel pass not many people know about and a most unlikely place to talk about tigers. Check it out.

Thought for the day: "It is not the destination where you end up, but the mishaps and memories you create along the way" ~ Penelope Riley.