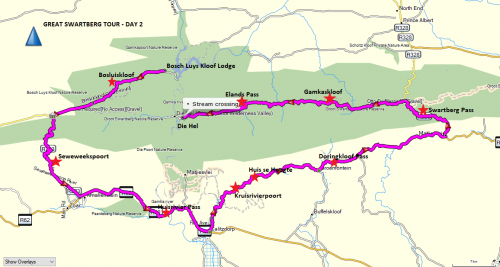 The southern ascent of the Swartberg Pass is such an eye opener for first time drivers. The smooth and wide tarmac of the R328 suddenly gives way to gravel just after Cobus se Gat as a sign warns that no caravans or heavy vehicles are allowed. Some tight hairpins appear fairly soon followed by a long sinuous pull up past some old ruins, reputed to be where Bain housed his convict gangs.

The altitude goes up steadily and then that magical moment happens when one gets the first glimpses of those towering hand packed stone walls - Thomas Bain's trademark construction signature. The road narrows and swings sharply to the left through a crook in the mountain and the gradient gets steeper. At the apex of the next right hand bend a brown sign announces that this spot is called 'Skelmdraai'. No-one really knows where the name originates from, but it is more than likely to do with the band of convict labourers. With some careful parking we manage to get the whole convoy off the road and get our first group photo done - quite an exercise getting 22 people to muster in one spot!.

The views of the Little Karoo to the south are amazing - a full sweep of 180 degrees over a patchwork quilt of orchards and fields with another big mountain range as a backdrop. The weather is glorious as the guests revel in the majesty of the Swartberg, but the sun is heading towards Cape Town and we need to move on as we still have a long, tough drive ahead of us.

Soon we are up and over the Swartberg past the sticker plastered signboard "Die Top" - clearly those allocating names had run out of enthusiasm and creative  genius with that name, but then again, I suppose less is often more. [More lower down...]

The turnoff to the Gamkaskloof is approximately halfway over the Swartberg Pass on a big plateau named Teeberg - another mysterious name, but quite possibly as simple as the spot being popular as a tea-break for wagon travellers. Another sticker emblazoned sign pronounces a 2 hour/37 km trip to Die Hel. It's a one way ticket to Die Hel, but fortunately with good cars, most of us usually make it back out as well.

The Gamkaskloof road seems to go on forever - from one valley to the next, stringing together 11 small passes in a brilliant display of mountains, valleys and streams - sights that will leave you with a deep sense of inner peace and wonder. The road can be treacherous in places with no rails guarding near vertical drop-offs and bends so sharp they make hairpins look wide.

It's a place one should stop often and think about life. Stopping is also good as it gives drivers (and passengers) a break from the bumpy road and intense concentration. Motorcyclists arrive at their overnight stops exhausted.

Two hours later and finally the summit of Elands Pass is reached. Everyone stops and gets out to take photos. The white strip of gravel zig-zags its way down the mountain to the doll-like buildings almost 600m lower down in the valley. [Next week we explore Elands Pass and Die Hel...]

We've spending a lot of time planning our inaugural tour to Namibia and are pleased to announce most of the details are now finalised with the tour having been loaded onto the website on this link: NAMIBIA TOUR.

The tour has been designed for the first time traveller to Namibia, taking in some of the best known attractions like the Khomas Hoogland and Namib Desert; a visit to Walvis Bay and Swakopmund taking in Dune 7, some dune riding on quad bikes (yes, you can!), watching the flamingos; the wild horses of Aus; the ghost town of Kolmanskoppe; a stop at Luderitz to see the gannets and seals and of course no visit to Namibia would not be complete without taking in the wonders of the Fish River Canyon and mineral spings at Ais-ais. We will also be driving a number of new passes - after all this is a mountain passes company!

Join us for our longest tour to date (8 days) as we take all the worry out of your hands and plan the tour to our high standards. Only 4WD vehicles are allowed on this tour.

BEN 10 V2 TOUR - If you own a 4x4 and have some off-road driving experience, join us for the experience of a lifetime, yet enjoy the luxury of comfortable accommodation and good food. Four days of gorgeous adventure driving. More info and online bookings here: BEN 10 V2 TOUR.

British Occupation of the Cape Colony 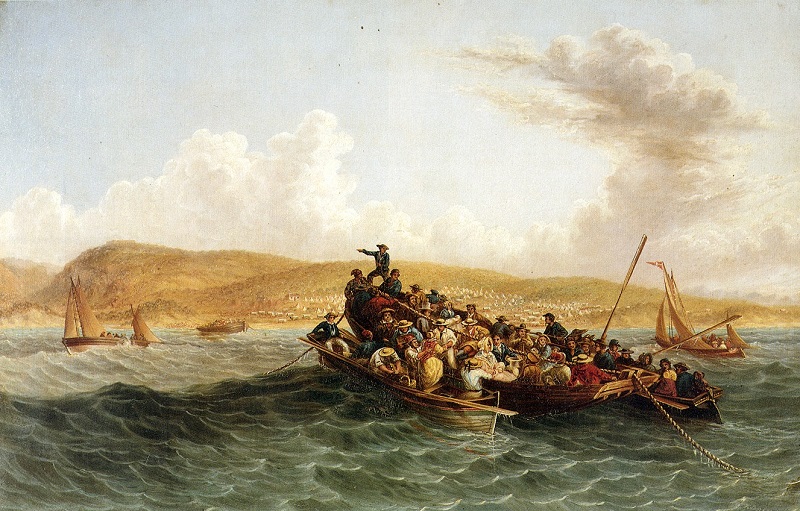 In 1787, shortly before the French Revolution, a faction within the politics of the Dutch Republic known as the Patriot Party attempted to overthrow the regime of William V, also known as the Prince of Orange. Although the revolt was crushed, it was resurrected after the French invasion of the Netherlands in 1794 and 1795, which resulted in the prince fleeing the country. The Patriot revolutionaries then proclaimed the Batavian Republic, which was closely allied to revolutionary France. In response, the prince, who had taken up residence in England, issued the Kew Letters, ordering colonial governors to surrender to the British. The British then seized the Cape in 1795 to prevent it from falling into French hands. The Cape was relinquished back to the Dutch in 1803, but in 1806 the British again inherited the Cape as a prize during the Napoleonic Wars.

Like the Dutch before them, the British initially had little interest in the Cape Colony, other than as a strategically-located port. The Cape Articles of Capitulation of 1806 allowed the colony to retain all of its rights and privileges, and this launched South Africa on a divergent course from the rest of the British Empire.

British sovereignty of the area was recognised at the Congress of Vienna in 1815, the Dutch accepting a payment of 6 million pounds for the colony. As one of their first tasks, the British outlawed the use of the Dutch language, with a view to converting the European settlers to the British language and culture.

In 1820, the British authorities persuaded about 5,000 middle-class British immigrants (most of them “in trade”) to leave Great Britain with the promise of free farms in South Africa. They were settled in the region around modern-day Port Elizabeth and East London, creating a buffer zone between the existing farmers in the Cape Colony and the marauding black tribes which were sweeping down from the north. Even in modern times, this area is still referred to as “the Border”.

Next Week : The era of Shaka Zulu

PODCAST - This week we cover the first half of Day 2 of the Great Swartberg Tour. CLICK TO LISTEN

Featured Pass of the Week

We head off to the border area between KZN and Mpumalanga to introduce you to our featured pass this week. Besides being exceptionally scenic, driving here will get you to the fascinating village of Dirkiesdorp and a larger than life character, named Swart Dirk. Discover the origins of the Drakensberger (Uysbees) cattle breed.

Rooikranspoort - A minor tarred poort near De Rust on the R341 in the Little Karoo.

Thought for the day: "It's better to see something once than to hear about it a thousand times" ~ Chinese proverb.