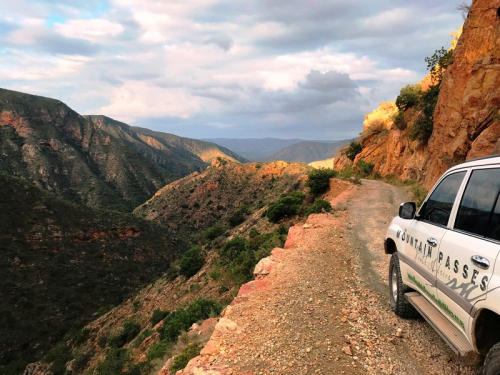 At the summit of the Rooiberg Pass we located the prayer cairn and each driver added a rock to the cairn in the tradition of the old wagon travellers. The final pass was the Assegaaibosch Pass which delivered us directly to the entrance gates of the Rooiberg Lodge just after sunset. Our welcome there was fabulous with a free drink and a marvellous dinner. A highly recommended lodge, with attentive staff and very good value for money.

This was a wonderful tour with a great group of fellow travellers and one we will definitely be repeating again.

* Our planned tour to Namibia has been put on hold due to technical reasons which we are working on. An alternative tour will be structured to fill that time slot - possibly to the Wild Coast The rural descendants of the Cape’s original European Settlers, now known collectively as “Boers”, became increasingly unhappy with the British administration during the 1820s and 1830s. The replacement of Dutch with English as the language used in the Cape's judicial and political systems put the Boers at a disadvantage, as most spoke little or no English. Great Britain's alienation of the Boers was also particularly amplified by their decision to abolish slavery in all of its colonies in 1834.

Bridling at what they considered an unwarranted intrusion into their way of life, some of the Boer community began to consider selling their farms and venturing deep into South Africa's unmapped interior to pre-empt further disputes and live completely independently of British rule. Others were frustrated by the apparent unwillingness or inability of the British government to extend the borders of the Cape Colony eastward and to provide them with access to more prime pastures and economic opportunities. They resolved to trek beyond the colony's borders on their own.

On 8 September 1834, an exploratory expedition was sent out to reconnoitre routes and to establish treaties with the black tribes that they would encounter along the way. They arrived in Port Natal (now Durban) in February 1835, exhausted after their long journey. They were welcomed with open arms by the few hunters, traders and missionaries that had settled there. After some rest and replenishment, they departed Port Natal in early June 1835, and followed more or less the same route back to the Cape, arriving in Grahamstown in October 1835. Feedback meetings and talks took place in the main church to much approval, and the first sparks of Trek Fever began to take hold.

Calling themselves the “Voortrekkers” (literally meaning “early migrants”, but better translated as “pioneers” or “pathfinders”), six large groups left the Cape Colony between January 1836 and April 1837. There was no clear consensus amongst the Trekkers on where they were going to settle, but they all had the goal of settling near an outlet to the sea. Initially all of the groups moved north, to an area between the Orange and Vaal rivers (the present-day Free State province) but after this they split up into three main directions; north-west, north, and east.

The Voortrekkers faced incredible hardships, including the mountainous terrain, wild animals, and diseases such as sleeping sickness and malaria. But it was conflict with the local black tribes that was to cause the most damage. Despite pre-existing peace agreements, the Voortrekkers were hounded and attacked, first by the Ndebele and later by the Zulus, whose intent was either to steal cattle or to protect tribal lands, or both. Despite superior weapons and tactics, sheer weight of numbers often resulted in heavy losses on the Boer side, and sometimes even in complete annihilation of the trekking parties.

One of the biggest and the most famous of these battles was the Battle of Blood River, which took place on 16 December 1838. A Trekker scouting party brought news of a gathering of Zulu forces, so Voortrekker leader Andries Pretorius formed his wagon train up into a fortified laager next to the Ncome River. There were 468 Boers, 3 Britons, and about 60 black helpers in the group.

During the night of 15 December, six Zulu regiments with an estimated 15,000 soldiers crossed the Ncome River and started massing around the encampment. The battle started at dawn on the 16th, and for two hours the laager was stormed by successive waves of warriors, the Boers managing to successfully repel each attack. Pretorius then ordered a group of horsemen to leave the encampment and engage the Zulus in order to disintegrate their formations. The Zulus withstood the charge for some time, but rapid losses led them to scatter, and the Trekkers pursued their fleeing enemies for another three hours.

The Zulus lost an estimated 3,000 warriors in the battle. Amazingly, none of the Voortrekkers had been killed and only three had been wounded, including Pretorius himself.

Before the battle, the Voortrekkers had taken a vow that, if victorious, they would observe the date forever afterwards as a Sabbath. The 16th of December is still a public holiday in South Africa; prior to 1994, it was known as the “Day of the Covenant”, and after that as the “Day of Reconciliation”.

By early 1840 the Great Trek had largely ended, although another smaller migration would take place after the British annexation of Natal in 1843. Altogether about 12,000 persons had taken part, about one fifth of the Cape Colony’s population at the time. The event was a defining moment in South Africa’s history, as it opened up the interior of the country, changed the dynamics and distribution of the black tribes, and led directly to the founding of several autonomous Boer republics.

Our featured pass of the week takes us to the KZN battlefields where we unearth some fascinating history, in keeping with the current chapter on our history. If you enjoy history, don't miss this one ~ meticulously researched by Mike Leicester.

Thought for the day: "A leader is one who knows the way, goes the way, and shows the way.” ~ John C. Maxwell