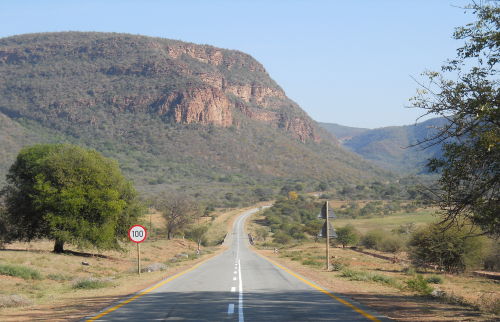 * Pass of the Week - The Road to Hell

The Langkloof section of Prince Alfred's Pass is our favourite part, as it is here that the road narrows significantly and the engineering feats of Mr. Bain still stand proudly 140 years on. Waterfalls and narrow bridges, ferns and forests all passed by as our convoy laboured up the final stretch towards the summit, past the bend known as Tiekielief Draai. The story goes that the convicts who had served their time in the prison works programme, then received their "ticket of leave". The prisoners struggled with the English, and the phrase morphed into "Tiekielief". It was on that part of the construction of the pass, that several of the prisoners received their freedom.

Once over the summit of Prince Alfred's Pass, we drove past Avontuur and took the new direct road via the Uniondale Poort to arrive at our overnight venue in Uniondale. The town was once the centre of the wagon manufacturing industry, but with the advent of the motor car, the area turned to farming and tourism as a new source of income. Part of the tourism package is the famous Uniondale ghost. A story so vivid in the retelling that it continues to draw visitors to the town in a regular stream. According to the locals, Good Friday is the right night to lurk on the lonely moonless roads. [More lower down...]

We did our best to arrange a meeting with the spooky lady hitch-hiker, but she failed to keep the date! In Uniondale we had to split our group up into two different guest houses as none of the establishments could cope with 22 people. There is also only one restaurant in the town - aptly named The Hungry Ghost, which we had prebooked for the evening meal. So typical of a small country town, the kitchen struggled to cope with a big group and some guests waited almost two hours for their meals, but the converse was that all the meals were excellent and represented such good value for money, you will unlikely find anywhere in a big city.

By 9 pm the rain started in earnest and continued throughout the night, leaving us wondering what we were going to have to tackle the next day in the Baviaanskloof.

[Next week: Uniondale to Zandvlakte]

Nongqawuse: The Dead Will Arise 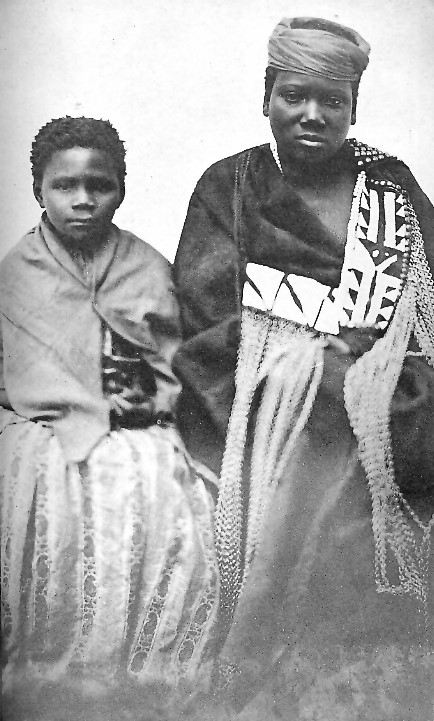 Nongqawuse (on the right)A series of battles historically known as the Frontier Wars started in 1779, during which the Xhosa tribe and the Boer and British settlers clashed intermittently for nearly a hundred years. This was largely due to farming expansion along the eastern frontier of the Cape Colony. The wars would continue right up until 1878, but a sequence of unfortunate events occurred in 1856 and 1857 which would have a dramatic effect on the Xhosa nation, changing their fortunes forever.

In April 1856, a 15-year-old girl named Nongqawuse was sent to scare birds from her uncle's crops in his fields near the mouth of the Gxara River in the Wild Coast region of South Africa. When she returned, Nongqawuse told her uncle and guardian Mhlakaza, a Xhosa spiritualist, that she had met the spirits of two of her ancestors.

She claimed that the spirits had told her that the Xhosa people should destroy all of their crops and kill all of their cattle. In return, she said, their dead ancestors would arise and help the Xhosa to sweep the British settlers into the sea. Their granaries would be replenished, and their kraals would be filled with healthier and more beautiful cattle.

Somehow the Xhosa chiefs and leaders believed her and became convinced that her prophecy would be fulfilled. In the eight days leading up to 18 February 1857, the date of the predicted apocalypse, most of the tribe slaughtered their cattle and burned their crops. It is estimated that between 300,000 and 400,000 cattle were killed.

The prophecy never did transpire, and the resulting famine decimated the Xhosa population, reducing their numbers from 105,000 to 27,000 over the next few years, a decrease of about 75%. Nongqawuse blamed the failure of her prophecy on a small minority of the nation that had refused to obey her instructions, but the people turned against her and she fled to live with a white family near Alexandria. She died in 1898.

[Next week: Discovery of Diamonds]

PODCAST: A chat about the final day of the Thomas Bain Heritage Tour. Click to listen.

Pass of the Week:
We head off into one of the driest parts of South Africa this week and unpack a mountain pass so rugged, to have earned itself the name of 'The Road to Hell'. One of our subscribers, Fraser Mackintosh volunteered to film the pass for us and although the footage is not perfect, it shows the harsh realities of what to expect on this pass. The going was painfully slow during the traverse, which meant we had to speed up some of the technical sections X2 and even X3 to make the videos enjoyable to watch. There are three videos in the series, so allow yourself 14 minutes to watch them all. Just a reminder to anyone planning to drive this pass that the video makes the road look much easier than what it is in reality.

Thought for the day: "And then there is the most dangerous risk of all - the risk of spending your life not doing what you want, on the wager you can buy yourself the freedom to do it later" - Randy Komisar