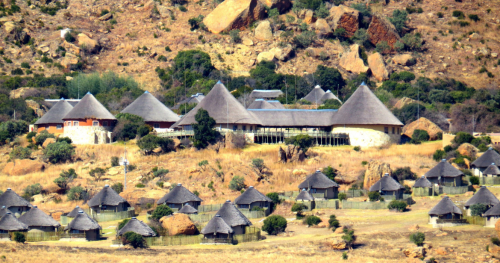 We stopped in at the Rietvlei farm to show our guests the Makedaat caves, which was met with mixed emotions of "Absolutely yes" and "Definitely not". Midwinter is a bit cold for the caves, which is why we had not booked accommodation there but it is definitely worth experiencing a night in one of the caves - and if you are one of the more adventurous types, then the big open cave, called Alwyn se Bak is the one to go for. Only one of the caves has electricity, which is the Van Terreberg Cave.

Next up was a visit to the Speekhoutkloof farm, where a wonderfully hospitable lady offered to take us 4 at a time for a guided tour through the Tree House and this one had everyone swooning for a return visit to spend a night in this unique cottage, built into an old and sturdy wild peach tree. It comes complete with an outside toilet and shower (the leaves and branches are the roof) a small kitchenette, a wood stove, and a bedroom for two upstairs where the roof blinds can be rolled back for you to fall asleep gazing at the stars. It's a winner.

We were asked to support the local 'kerkbasaar' at Beaco's Nek, a few kilometres further east. We were told that the pancakes were worth stopping for, so being keen supporters of the local economies, we stopped at the bazaar - a large tin farm shed with lots of smoke around made the place easy to find. A quick walk around the shed showed that the stall doing the best trade was the pub and at 13h00 there were lots of folk talking and laughing much louder than what is normal. Red noses and rosy cheeks confirmed brannewyn en Coke was the medicine of choice. The pancakes were sold out, so we made this our unofficial lunch spot. This annual fund-raiser is a big deal in the Baviaanskloof and every farmer and his dog attends (to coin a hackneyed phrase). It also made finding accommodation quite a problem as most of it had been pre booked by bazaar attendees.

Studtis Poort is a joy to drive, regardless of water levels, and it was here that we saw the first signs of any water in the Baviaans River, but what was evident was the extent of the flood damage during May. The poort has about 10 individual crossings of the river and once again the geology and vegetation is spellbinding.

One of our scheduled stops was a country trading store called Babe se Winkel. It's the real thing where you can buy Chappies bubble gum, apricot sweets, liqourice, bicycle parts, zinc tubs, mealie meal and a wide range of goods that the population in the valley need. Unfortunately the store was closed (Saturday 2.30 pm) so we took a side road to visit the Seven Fountains and Wild Fig-Tree forest. In a densely wooded thicket, the water wells up from seven small fountains, which supplies perennial water to a healthy and very old ficus forest.

The farmer has built an elevated timber walkway which allows good viewing of the ancient trees. It does need some maintenance here and there and perhaps the only detraction is that some silly people have carved their names into the bark of these beautiful old trees.

We arrived at our overnight guest farm - Zandvlakte where we were met by Piet Kruger, who stands almost 7 foot tall and has hands like vice-grips. The hospitality was fantastic and Magriet Kruger laid on a superb 3 course meal for the whole group. A good night's rest was enjoyed as a steady rain started at about 10 pm and continued throughout the night.

[Next week: Into the Bioreserve] 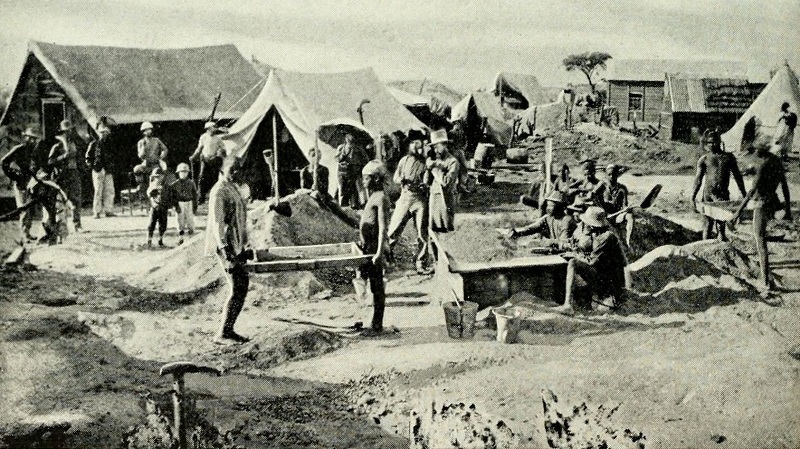 The history of diamond mining in South Africa began in early 1867 on the land of a poor Boer farmer, Daniel Jacobs, near the small isolated settlement of Hopetown on the Orange River. Jacob’s son, Erasmus, collected some pretty stones, including a shiny pebble, along the south bank of the river that he and other children wanted to use in games. His mother noticed it and showed it to a neighbouring farmer, Schalk van Niekerk, who was so intrigued by its appearance that he offered to buy it. The woman laughed at this idea and gave the pebble to him.

The farmer thought it might have some value and showed it to several individuals in Hopetown and nearby Colesberg, but found little interest. The civil commissioner in Colesberg, Lorenzo Boyes, examined the pebble and discovered that it could scratch glass. He then sent it to Dr. William Guybon Atherstone, a physician and amateur geologist residing in Grahamstown who, based on its physical properties, pronounced it a diamond weighing 21.25 carats.

This surprise discovery prompted Boer farmers along the rivers to look more carefully for “blink klippe” (bright stones). As news of the initial diamond discovery spread, small parties of prospectors rushed into the region to search for similar gems. Over the following months, additional diamonds continued to be found, and by 1869 the river diggings had yielded hundreds of diamonds (including the discovery of the 83.5 carat diamond known as the “Star of South Africa”). Much of the scientific effort during this time was directed toward finding the host rock in which the diamonds had originally formed.

In 1870 diamonds were being found in some abundance on the Bultfontein farm, 20 miles south-east of the river diggings, in what came to be called the “dry diggings” (later recognized as diamonds occurring in the upper weathered and decomposed sections of a volcanic pipe). These events started a rush of thousands of people of all backgrounds and from a number of countries to lay claim to sections of land to prospect for diamonds over a large area. Within two decades, many rich deposits were found that would later become the famous diamond mines of South Africa.

This week we bring you a new innovative video which features this spectacular pass in real time with all the points of interest narrated at exactly the right point. We also have a downloadable PDF which you can take with you and if you drive the pass in the same direction as our video and zero your trip meter at the entrance gate, you will have your own personal MPSA guided tour on hand. For those who prefer our edited videos with the Google earth animations, we have provided a 2 part series in this standard format at the bottom of the page.

Metzpoort - a small poort with a big history in the backwoods of the Free State.

Thought for the day: "Two roads diverged in a wood and I took the one less traveled by, and that has made all the difference" ~ Robert Frost