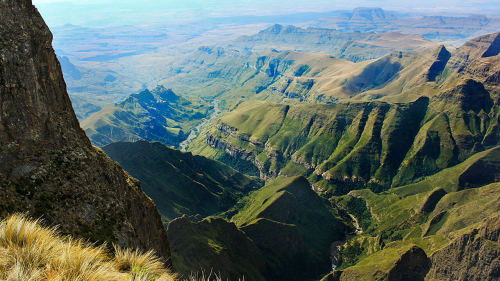 After a particularly humorous drivers meeting on the lawns at Zandvlakte, we got going by 09h30 and bade farewell to our hosts Piet and Magriet Kruger. If you want to enjoy old-school farm style hospitality, then book in at Zandvlakte. Their food was superb and a great evening was enjoyed by the group the previous night. It had rained steadily throughout the night and some of the more conservative ladies were already asking questions about water levels in the kloof - the level of concern being commensurate with the voice pitch.

The distance from the farm to the western entrance control gate of the bioreserve is just a few kilometres. The poor Parks Board official manning the gate really had his hands full. He was a relief person and it was his first day. The 'kerkbasaar' traffic heading back to Patensie arrived behind our convoy, causing a traffic tailback of about 25 vehicles. The one driver who reached the gate ahead of our convoy was already into the 12th minute of trying to get his payment done and his permit issued, when I figured those at the back of the convoy would be there for at least an hour.

I persuaded the almost frantic guard to allow me to help him and I wrote out a single permit for our entire convoy and ensured that he received a handsome bonus for being sensible. The gratitude shone through his eyes! The kerkbasaar group behind us did a copy/paste and in short order all 20 vehicles were on their way. We pulled over and allowed the hungover and hasty young bulletjies to be on their way. [More lower down]

The eastern bioreserve casts its spell immediately. The vegetation changes and a huge red mountain dominates the view ahead. It is aptly named Rooiberg and is etched with overhangs and small caves. It doesn't take too long and an old and weathered sign announces: " Dangerous mountain pass". It is the precursor to the Grasnek Pass.

The Grasnek Pass is impressive as it winds laboriously through a few side ravines, steadily gaining altitude, whilst huge views open up to the left and the wonders of the Baviaans begin to sink in. But it's that razor sharp right hand bend at the end of the eastern ascent, that reveals a view that truly takes your breath away. The road also quickly levels off here allowing a few kilometres where the views just get better and better. Peaks pop up between deep green valleys with hidden streams and waterfalls as the road meanders along the contour line. For me this is always the defining moment of the eastern bioreserve - the point where all your concerns, cares and worries melt away and the Baviaanskloof weaves its magic into your soul.

Another very sharp left hand bend is marked by what was once a warning sign and is today a sticker plastered signboard - a place where adventurers simply can't resist leaving their mark. Up ahead the road can be seen dropping down steeply to the left of a small conical outcrop. This is the second of two excellent viewsites. We took a break on the summit of the little peak for photos and just to marvel at the 360 degree grandeur surrounding us.

Two vehicles were coming up the pass from the eastern side. The pass is single width, so we opted to wait for the two vehicles to get past us, before we continued on our journey. Smart move!

The Grasnek Pass was built by local farmers with input from government. The completion of the pass took place as late as 1930 and the entire road through to Patensie took another 10 years to complete. Government officials described the road building efforts of the local farmers as "ingenious"

The road is convoluted and twists it's way down the mountains following the contours and ravines. In many places passing is impossible and it will require one of the vehicles to back up to a wider section. We reached the foot of the pass at the attractively laid out campsite 'Smitskraal' which is followed immediately by the longest and deepest water crossing in the Baviaanskloof. [Next week: Smitskraal to the old cableway] 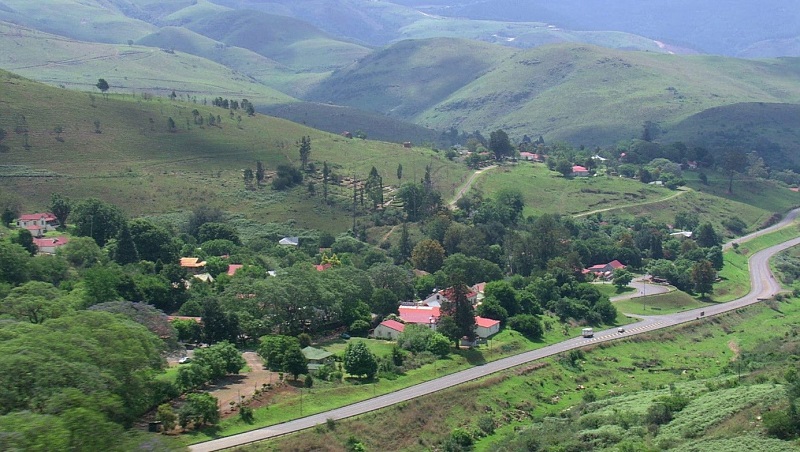 A number of insignificant gold deposits were discovered in the northern parts of the South Africa between 1840 and 1870. But the first gold rush in the country took place in 1873, when payable gold was discovered on the farm Geelhoutboom near Sabie. President T.F. Burgers, when he visited the site, officially named the area the New Caledonian Gold Fields, but jokingly referred to it as “MacMac”, because many of the miners had Scottish surnames. The name has stuck until the present day.

One of the diggers, Alec “Wheelbarrow” Patterson, left the crowded MacMac diggings and went off on his own to explore new territory. He had earned his nickname when he arrived at the diggings pushing a wheelbarrow with all of his belongings in it. He had gotten rid of his donkey after it kicked him, and had decided that a wheelbarrow was a less painful mode of transport. He had pushed it all the way from Cape Town – a distance of about 1,000 miles.

“Wheelbarrow” Patterson struck it rich in a small stream a few kilometres away from MacMac, later named Pilgrim’s Creek. He was a solitary man and did not share his find with anybody, but soon afterwards another digger named William Trafford also found gold in the same stream, and registered his claim with the Gold Commissioner in MacMac.

This sparked off the biggest gold rush of the time, and on 22 September 1873, Pilgrim’s Rest was officially proclaimed a gold field. By January 1874, some 1,500 diggers were working about 4,000 claims in and around Pilgrim’s Creek. By 1876 most of the tents had been replaced with more permanent structures (usually made from timber and corrugated iron) and various businesses began to trade, supplying the diggers with the necessary equipment and provisions.

Most of the gold in the area was alluvial gold – gold dust recovered by washing the gravel from the beds and banks of the streams. But there were nuggets too, lumps of solid gold occasionally found under or wedged against boulders. The largest of these was the “Breda” nugget, which weighed in at 214 ounces (more than 6 kg), but legends of nuggets weighing as much as 11 kilograms were told around the campfires.

PODCAST: Listen to a chat covering the eastern half of the Golden Gate Highlands National Park. Click to listen.

This week we head off to the Little Karoo to explore a little known gravel pass tucked into the deep valleys between the Langeberg/Outeniqua and Swartberg ranges. The traffic is almost non existent and adventure travelers can enjoy the sense of deep solitude that this road provides.

Thought for the day: "There are only two days in the year that nothing can be done.  One is called yesterday and the other is called tomorrow.  Today is the right day to love, believe, do and mostly live." ~ Dalai Lama