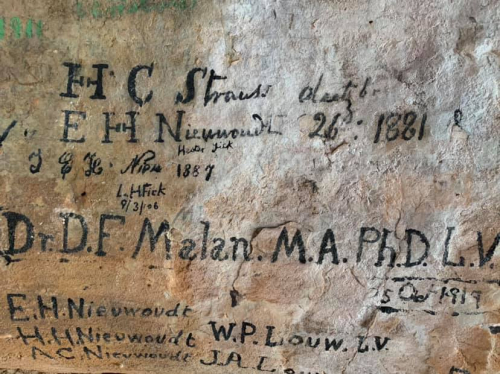 UPCOMING TOURS
We will be offering a few one and two day tours during October and November. You will be the first to know about them and we have a few delicious surprises in store for you. The only tour which still has a few tickets available is the Ben 10 Eco Challenge V2 Tour. If there is one mountain pass tour you have to do, it's this one. Four days of awesomeness > from the biggest mountains, to the greenest valleys; tumbling waterfalls; technical driiving; mind blowing scenery; great country food and new friendships made. Get all the info and sign up on this link: BEN 10 V2 TOUR.

The next two passes, Papstraat and Tarentaalstraat, followed each other back-to-back in quick succession. After a short stop to photograph an old building, we headed along a gravel link to Sandrivierspoort, then along the tarred R33 to Vaalwater. As we were running slightly ahead of schedule, it was decided to detour off of the planned route to visit one of the attractions near the town, a quaint little church on the farm Twenty-Four Rivers.

Designed by Sir Herbert Baker (he also designed the Union Buildings in Pretoria and many other prominent buildings in South Africa), the St. John the Baptist church was built using local materials and stone quarried in the area. It was dedicated on the 15th of July 1914 by the Right Reverend Michael Furse, Bishop of Pretoria at the time. The grounds are immaculately kept, and the complex consists of the church itself, as well as a few other buildings which were added later, all of them in the same style as the original construction. Sean, our photography fundi on this trip, was soon happily immersed in capturing images of the church from every conceivable angle, whilst the rest of us took the opportunity to relax and stretch our legs, a welcome break from the concentration of driving. [More lower down...] 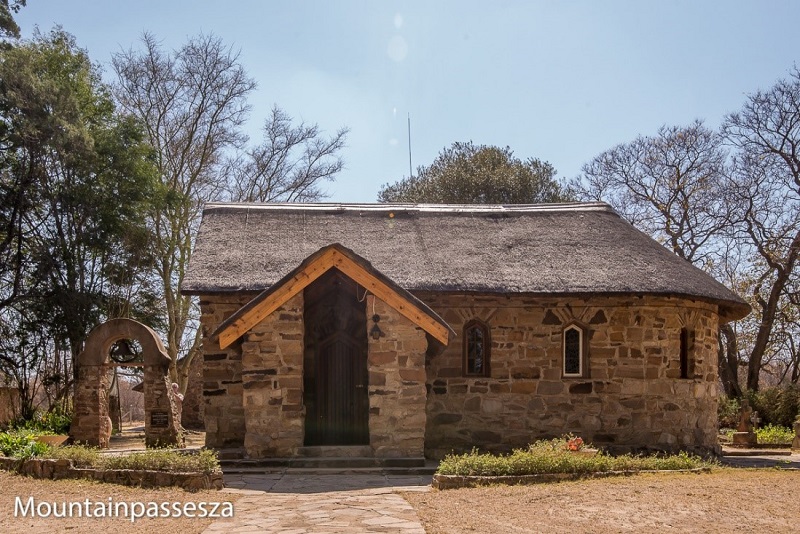 After about 45 minutes we headed back to Vaalwater, then resumed our route to the next pass, Martjie Se Nek. During the 2nd Anglo-Boer War, marshal law was applied in the area, which the local Afrikaner farmers referred to as “Martjie Louw”; it appears that this is how the pass derived its name. We stopped for lunch at Visgat, a farm near the top of the pass, then continued along a sandy track to our 6th pass of the day, Brown’s Cutting.

Twelve months ago Brown’s Cutting was a rudimentary track, and it was surprising to find that considerable work had been done on the road, making it an easy negotiation. The reason for this became obvious when we reached the bottom of the pass; a new game farm called Nyati (which means “Buffalo”) had been established in the area, and the owners have upgraded the access roads at what must have been enormous expense and effort. The name of the reserve was not misleading; we soon came upon a herd of buffalo right next to the newly-installed double game fencing.

On our next link through the Tambotie River valley back towards the R33, we came across an incongruous sight; a medieval-style castle built right on top of a tall ridge. We cannot be sure who built this monstrosity (we have our suspicions), but it would be difficult to imagine a more out-of-place building style in this bushveld setting. Shaking our heads in disbelief, we quickly came back to earth with another buffalo sighting a few kilometres further down the road.

Next week: The final chapter on this wonderful tour

Cederberg Classic Tour - report back.
One can never grow tired of the Cederberg. I recall my first ever visit to the Cederberg in about 1984, where under the influence of a horrible head cold, we spent a few cold nights on a sandy river bank in a pup tent, feeling cold, dirty (no hot water in the ablutions) and thoroughly miserable. The farm owners had made a mistake and double booked the site we had chosen, and being the younger family, we were politely asked to relocate. Despite that shaky start with my Cederberg relationship, we have grown closer - 35 years later.

We named our 2019 tour the Cederberg Classic as the plan was to take guests to all the classic places in the area that one can get to by car. Bookings sold out swiftly with some guests driving down from as far as Pretoria. Months of planning go into every tour, yet we are always dependent on mother nature to be nice. 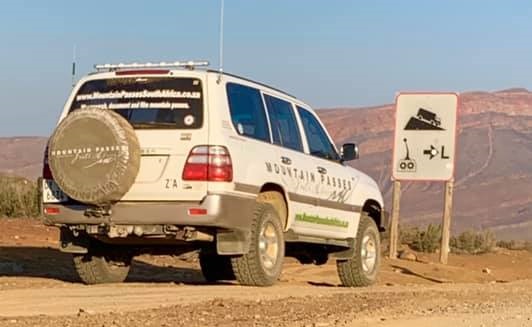 Grootrivierhoogte PassThe group met up in Ceres, where we fitted all the vehicles with two way radios and soon we were winding our way northwards via the Swaarmoed Pass and Karoopoort and on to the dreaded R355 for our tea-break at the Tankwa Padstal. For most of our guests, this was a first time visit and the planned 10 minute stop, quickly turned into an hour as the home made ginger beer sales skyrocketed. (Potent stuff - Warning, do NOT shake the bottle!)

Peerboomskloof and Katbakkies Pass (the latter got the second highest score by our guests) offered picture perfect late winter scenery with blooms apparent all over the mountains. We parked off between the old ruins and sandstone rocks on the plateau to enjoy an open air lunch. Weather wise, things were just about perfect, maybe even a little warm. It was 30C with no wind and no cloud cover.

Next up was the Blinkberg Pass (one of my favourites) and soon we passed our overnight stop (Mount Ceder) and drove on past Matjiesrivier, to reach Cederberg Cellars for wine tasting and a fine way to end the first day of the tour sampling Dwarsrivier's excellent award winning wines.

We backtracked to Mount Ceder arriving at 5 pm bang on schedule and enjoyed a wonderful evening of farm food and fine wine at this excellent family run 4 star guest farm.

Discovery of Gold on the Witwatersrand 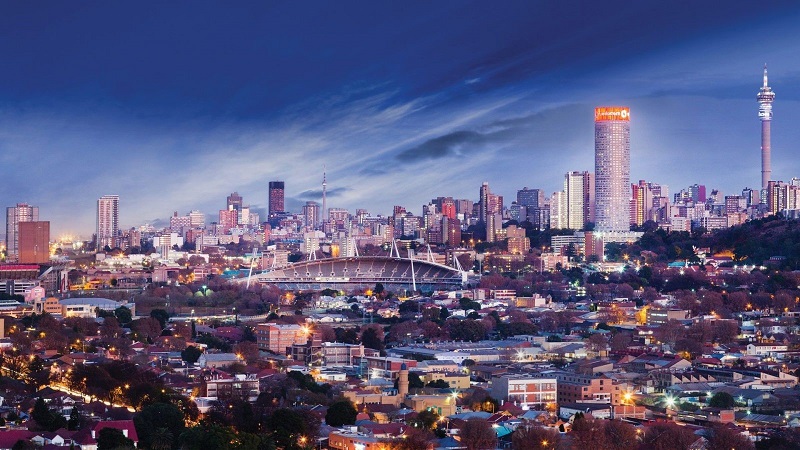 The first recorded discovery of gold on the Witwatersrand was made by Jan Gerrit Bantjes in June 1884, on the farm Vogelstruisfontein, and this was followed soon afterwards by the Struben brothers who uncovered the Confidence Reef on the farm Wilgespruit. However, these were minor reefs, and today it is the general consensus that credit for the discovery of the main gold reefs in the area must be attributed to George Harrison, whose findings on the farm Langlaagte were made in July 1886. His discovery precipitated the biggest gold rush in recorded history.

It did not take long for fortune-seekers from all over the world to flock to the area, and soon what was a dusty mining village known as Ferreira's Camp was formalised into a settlement. The name chosen for the new town is thought to have been derived from the names of two state surveyors that were sent to map out the plots, Johann Rissik and Christiaan Johannes Joubert. Within 10 years, Johannesburg had become the largest city in South Africa, and it remains so up until the present day.

From humble beginnings, gold production in South Africa increased steadily to reach a peak of approximately 1000 tons in 1970, at which point the country was by far the largest producer of gold in the world. But it became necessary to dig deeper and deeper to find payable gold, and many of the mines are no longer economically viable.

As a major global industry, mining in South Africa boasts a high level of technical and production expertise, as well as wide-ranging research and development activities. The country has world-class primary processing facilities, covering carbon steel, stainless steel and aluminium in addition to platinum and gold beneficiation.

In modern times, gold and diamond production are well down from their peaks, although South Africa is still on the world’s top 10 list for both products. But it remains a cornucopia of other mineral riches, and is the world's largest producer of platinum, titanium, chrome, manganese, vanadium and vermiculite. It is the second-largest producer of uranium, ilmenite, palladium, rutile and zirconium, and is the third-largest coal exporter. South Africa also has huge reserves of iron ore.

Next week: The Rinderpest Panzootic

PODCAST : Click the link and enjoy the 3rd and final chat about preparing for a gravel travel journey. CLICK TO LISTEN

Pass of the week:
Nelshoogte, also known as Nelsberg Pass, is located on the tarred R38 road between Barberton and Badplaas in Mpumalanga. It was named after Louis Johannes Nel (1821 – 1860), the father of the three Nel brothers that founded Nelspruit, when he procured the farms Doornhoek and Goedehoop at the foot of the mountain.

Thought of the day: "Our happiest moments as travelers always seem to come when we stumble upon one thing while in the pursuit of something else" ~ Lawrence Block