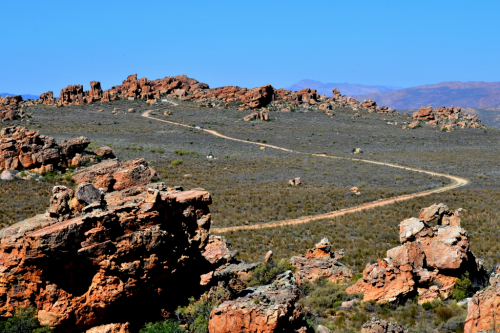 The road to the Stadsaal caves and rock formations, Cederberg. - Photo: Hans Wolfaardt

The road splits at Matjiesrivier in a four way intersection. Sharp left leads to Dwarsrivier and Kromrivier; oblique right leads to the Cedar Rock Private Nature Reserve and straight ahead leads to Wupperthal - our road of choice. This is what we call a 30 kph road as no matter how fast you try and drive, that will be your average speed by the time you reach Wupperthal. But this road is all about driving slowly, stopping frequently, talking to the farmers, soaking up the stunning rock formations and the achingly blue skies. 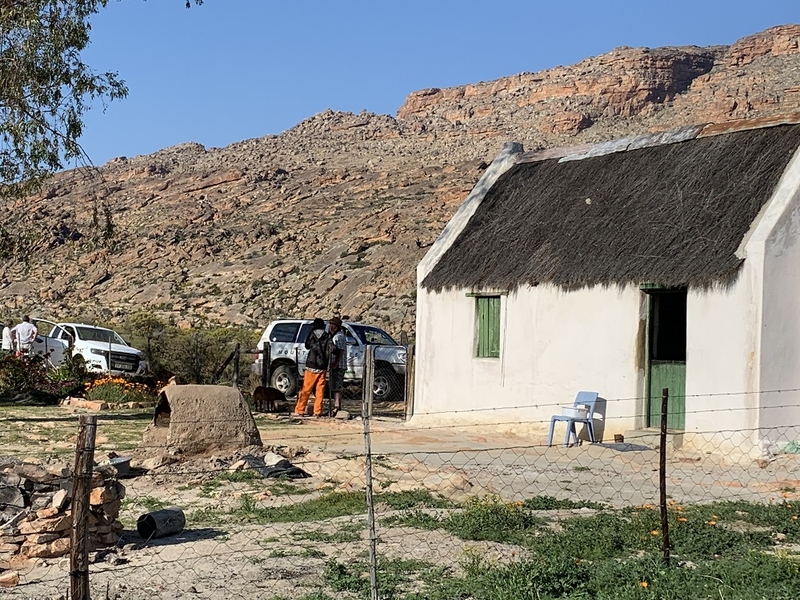 A tiny thatched cottage appears almost astride the road. The road actually kinks around the cottage and a tall, lanky man doffed his hat as we arrived. His name is Jan. He does not know his age or his surname, but popped into his cottage armed with his ID book which showed he was 58 years old. He lives in these high mountains, completely alone on a meagre government pension. His dog's name is Annerjan. Life is simple. Our entire group spent time engaging in conversation and left him with an armful of food. These are the magical moments of our tours - completely off chance.

Soon we arrived at Eselbank and diverted onto a two spoor jeep track between dense stands of waboom (proteas) as we worked our way towards the southern side of the Eselbank waterfall, which provides a far superior perspective to the northern side. This was just one of the many highlights of the day.

[Next week: Eselbank to Clanwilliam]

On to our last part of the day, the daunting Witkop Pass. Unlike the other gravel roads up until that point, Witkop was in its usual rough state, requiring some careful driving along its 18-kilometre length. It took about 45 minutes to negotiate the pass, then only another 20 minutes on good gravel roads to reach Jentz Guest Lodge near Lephalale (Ellisras), our accommodation for the night.

Malie, our host, went way beyond the call of duty to provide us with an array of salads, a garlicky (but very tasty) potato dish, and some pap bedecked with a sweet chilli sauce to accompany our braai in the boma. Good food, a beverage or two, and some stimulating conversion kept us up until about 9:30 pm, at which point we all retired to our rooms to get some well-earned rest.

Malie provided us with a feast of a breakfast early on Sunday morning, then we hit the road again after a quick fuel stop. The tarred road to Marken served up numerous game sightings, then it was back onto the gravel amongst the huge granite cliffs, buttresses and rock towers that abound in the Masele Nature reserve. Sefateng Sa Mokgoba and Strikfontein Se Nek were our first passes of the day, then we transitioned on tar to the Moepel Nature Reserve, which is where our 3rd pass, Jakkalskuilnek, is located. 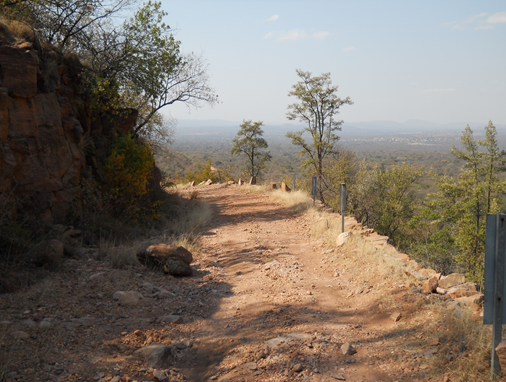 The pass itself is very rough although not particularly difficult, but the 12-kilometre long access road is, requiring some slow driving and careful choosing of lines. Down the pass and onto what has to be one of the worst tarred roads in South Africa – even the potholes have potholes! Fortunately the scenery in this area is magnificent, so it made up for the horrible road, and it didn’t take us long to get back to the comfort of the immaculate R518.

Kloof Pass was billed as the flagship pass of the tour, and it never disappoints. Amazing scenery, beautifully contoured corners, a perfect road surface and steep gradients make this one of the best passes in South Africa (in this scribe’s opinion). At the top of the pass, we turned back onto gravel for a 45-kilometre transition through the boom-controlled Witsand Nature Reserve, then onto Bastersnek, our last gravel pass for the day.

The tarred Roodepoort has only recently been discovered and added to the MPSA database, and it provided a scenic and pleasurable end to our passes for the trip. After not seeing many other vehicles since leaving the N1 the previous morning, we were brought crashing back to traffic reality on the short route to Mokopane, where we inflated our tyres before heading back onto the highway. The N1 on a Sunday afternoon is always busy, but luckily we made good time, and we managed to get through the continuous stream of vehicles back to Pretoria without any incidents. After saying our goodbyes, everyone headed off in different directions to get back home.

All in all, an excellent trip which transpired in perfect weather without any problems, enhanced by a fantastic group of friendly people that revelled in the sights and sounds of this little-known part of our beautiful country. 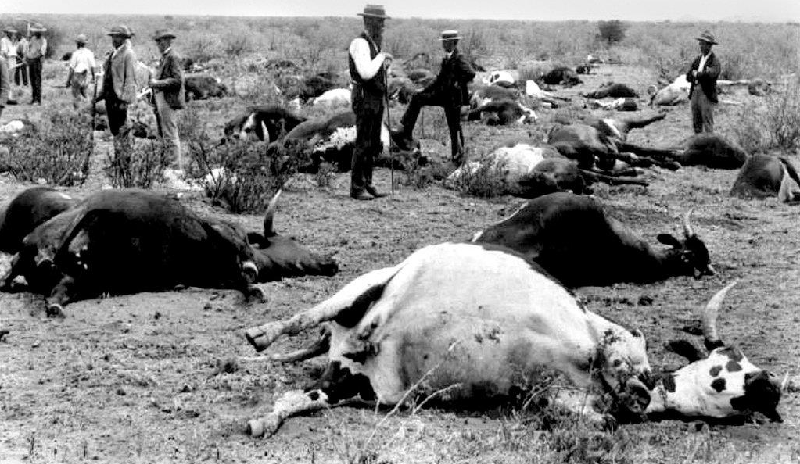 in February 1896, large numbers of cattle and game were reported to be dying from an obscure disease on both sides of the Zambesi River. Later identified as the Rinderpest (German for "cattle plague"), it was thought to have been introduced to North Africa in 1889 from Arabia or India, probably by the Italian army, after which it began to migrate towards the south.

On 3 March 1896 it reached Bulawayo in Rhodesia, and from there the plague was rapidly conveyed southwards by means of transport oxen. By April it had crossed the Limpopo into the ZAR, where the cattle population was quickly decimated. As soon as it appeared the authorities made every effort to confine the infection locally, but in spite of the most strenuous precautions, by October of that year the disease had spread to both the Orange Free State and parts of the Cape Colony.

A final determined attempt to check the extension of the scourge further southward was then made at the Orange River, by erecting a barbed-wire fence which was about a thousand miles long. This did delay the invasion of the disease into the Cape for a while, but on 24 March 1897 an outbreak unexpectedly occurred south of the line.

Realising the impossibility of preventing the spread of the disease by means of the measures already adopted, the authorities resorted to prophylactic methods. Robert Koch pioneered an immunizing vaccine by using the bile of animals that had died from the disease, and by the end of 1898 millions of cattle had been successfully inoculated. Koch was awarded a Nobel Prize for his work in 1905.

During this virulent panzootic, the Rinderpest caused ruin and devastation over extensive stretches of the country, destroying not only the majority of domestic bovines along its route, but also considerable numbers of indigenous antelope. It is estimated that nearly 3 million head of cattle succumbed to it in South Africa alone.

On 25 May 2011, Rinderpest was declared as the second disease to have been completely eradicated from the earth (the first was smallpox, in 1980).

PODCAST: A chat about the Cederberg Classic Tour (Part 1). Click to listen.

This week we head off to Mpumalanga to explore a short, steep concrete road (out & back) which offers amazing views of the Graskop escarpment

Thought for the day: "Do not follow where the path may lead. Go instead where there is no path and leave a trail" ~ Ralph Waldo Emerson.