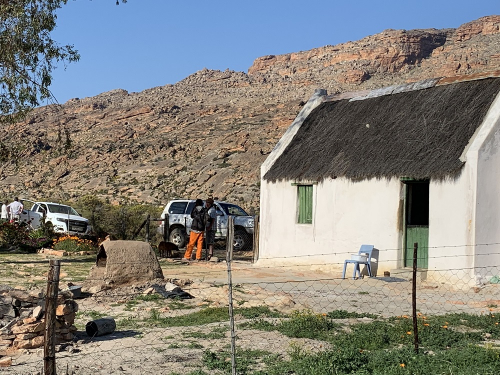 Life in the Cederberg - Remote and peaceful beyond description - Photo: Trygve Roberts

Eselbank to Wupperthal ~ The highlight of the first day was undoubtedly the Eselbank waterfall. The access road is normally from the northern side, which doesn't allow a full view of the falls, so we managed to find a longer, but very rewarding access road aproaching from the south. The plateau area is quite flat and the sudden appearance of the deep gorge, caught us all by surprise. The views of the waterfall and gorge are spectacular, so we spent a fair amount of time taking pics and enjoying the unseasonally warm spring weather.

It was time to continue our journey as we traversed the little village of Eselbank with its quaint old buildings, rickety fences and peaceful people - to cross the river via a wet (but not deep) causeway and up towards the Rooibos plantations, where the track is often subject to some soft sandy sections.

Soon we were at the summit of the Eselbank Pass. This very steep pass is also sometimes called the Kerskop Pass, presumably because some rock in the area looks like the top of a candle. For those doing the descent for the first time and especially passengers sitting on the left, the steep drops-offs and narrow width can be quite intimidating, but with most of the steep parts having been concreted, the traction is good and it can be driven in almost any passenger car - but carefully!

After multiple hairpins, we reached the last long part of the descent where the distant views of Wupperthal can be seen a long way ahead. It's a green oasis amongst the harsh and rocky landscape of the Cederberg, but this remote Moravian mission village recently ran the gauntlet of fire that gutted about 80% of the buildings. The charred walls still standing without their thatched roofs being a stark reminder of just how dangerous mountain fires can be. Miraculously, the church and the post office escaped the inferno, but many other old buildings  some of them dating back to 1870, were not so lucky.

There is construction going on. Scaffolding stands alongside burnt buildings and there are many sites undergoing reconstruction. The sports fields have been used to erect Nutec temporary homes for those residents who lost everything. These will be systematically removed as the old thatched houses are rebuilt and reoccupied.

[Next Week: Wupperthal to Clanwilliam]

We are working on a brand new bespoke tour that will focus on the Bedrogfontein 4x4 route in the Addo National Park. This route will include a number of tricky passes like the Zuurberg Pass and other historical roads. Watch this space. The tour is scheduled to take place during early November. 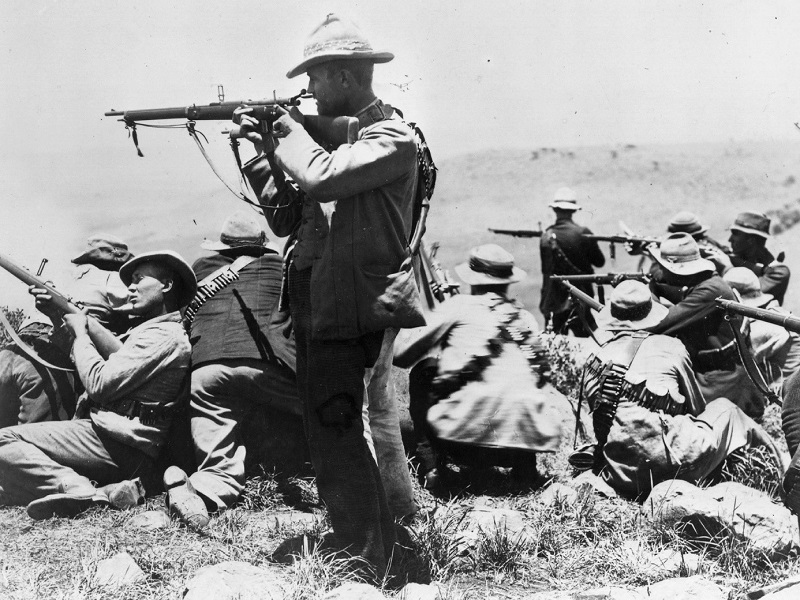 Boer troops in action during the siege of Ladysmith in Natal.

The 2nd Anglo-Boer War (also known as the South African War) took place from October 1899 to May 1902, between the imperial forces of the British Empire and the independent Boer republics (the ZAR and the Orange Free State). Because of the tactics used by the British in the latter stages, the war caused untold hardship and devastation amongst the civilian population, and resulted in a wave of resentment that has lasted until the present day.

There were many factors that contributed to the outbreak of hostilities, including the conflicting political ideologies of imperialism and republicanism, tension between political leaders, the Jameson Raid (a botched military attempt to overthrow the ZAR government) and the disfranchisement (denial of voting rights) of all “Uitlanders” (foreigners) in the ZAR. But the primary underlying cause was just pure greed. The Witwatersrand gold strike had led to the Boer republic becoming one of the richest nations on earth, playing a prominent role in international finance because of the importance of gold as a global monetary system. Britain was the centre of trade and industry in the world at the time, and needed a steady supply of gold to maintain this position.

The war started with the British overconfident and under-prepared, not having learned their lessons from the 1st Anglo-Boer War a few years previously. The Boers were well armed and struck first, besieging Ladysmith, Kimberley and Mahikeng in early 1900, and winning important battles at Colenso, Magersfontein and Stormberg. Incensed, the British brought in large numbers of troops and fought back. They relieved all three of the besieged cities, then invaded the two Boer republics in late 1900. The onward march of the British Army, by now numbering well over 400,000 men, was so overwhelming that the Boers could no longer fight staged battles in defence of their homeland. The British seized control of the Orange Free State and the ZAR, and the Boer leadership went into hiding or exile. In conventional terms, the war was all but over.

But the Boers were by no means finished just yet. They abandoned formal warfare tactics and increased their reliance on small and highly mobile military units, sniping at and raiding the British camps, capturing supplies, and disrupting communications. They avoided pitched battles and their casualties were light. There was no need for orthodox support structures, as every farmhouse in their area of operation became a potential resupply base.

The British response was fairly conventional at first, and they concentrated on restricting the freedom of movement of the Boer commandos and depriving them of local support. The railway lines had provided a vital method of communication and supply, and as the British had advanced across South Africa, they had used armoured trains and had established fortified blockhouses at key points. They now built additional blockhouses (each housing 6 to 8 soldiers) and fortified these to protect supply routes against the Boer raiders. Eventually some 8,000 such blockhouses were built across the two Boer republics, radiating out from the larger towns along the principal routes.

When this proved to be relatively ineffective, they resorted to a highly controversial tactic now known as the “scorched earth” policy. As British troops swept through the countryside, they systematically destroyed crops, slaughtered livestock, burned homesteads and farms, and interned Boer men, women, children and their workers in concentration camps. A total of 109 of these camps were set up, and more than 100,000 Boers, mostly woman and children, were imprisoned.

The camps were poorly administered from the outset and became increasingly overcrowded when the British implemented the internment strategy on a vast scale. Conditions were appalling, mainly due to neglect, poor hygiene and bad sanitation. Food rations were meagre and there was a two-tier allocation policy, whereby families of men who were still fighting were routinely given smaller rations than others. The inadequate shelter, poor diet, bad hygiene and overcrowding led to malnutrition and endemic contagious diseases such as measles, typhoid and dysentery, to which the children were particularly vulnerable. In some camps, the child mortality rate was as high as 95%.

Exhausted by more than two years of guerrilla warfare, demoralised, deprived of places of refuge, and broken-hearted by the loss of their wives and children, the Boer commandos were eventually forced to surrender. The last of the Boers capitulated in May 1902, and the war ended with the Treaty of Vereeniging which was signed on the 31st of that month. This agreement ended the existence of the South African Republic (ZAR) and the Orange Free State as independent Boer republics, and forced them into the avaricious arms of the British Empire.

The cost of the war was staggering, in terms of both finances and casualties. It is estimated that Great Britain spent in total about 210 million pounds during the war, which equates to around 250 billion pounds in today’s money. Nearly 22,000 British soldiers died, and more than 75,000 were wounded and repatriated. The Boers lost about 4,000 men during the fighting, but it was the concentration camps that did the most damage. Altogether, about 14,000 black South Africans and 28,000 Boer civilians died in the camps, of which approximately 24,000 were children under 16 – about 50% of the Boer child population at the time.

PODCAST - We chat about the final part of the Cederberg Classic Tour and look at future tours as well as the soon to be released website on Lighthouses of South Africa. CLICK TO LISTEN.

As it's spring this is a good time to visit the Northern Cape, which plays host to a surprising number of excellent gravel passes. Bookmark this one as part of your flower spotting route. It's different to the others and you are bound to see good flowers here in August and September.

Thought for the day: "Every man can transform the world from one of monotony and drabness to one of excitement and beauty" ~ Irving Wallace