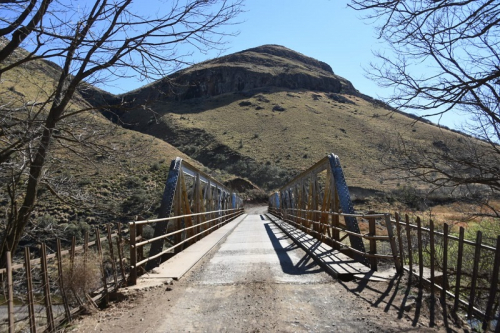 The bridge at the confluence of the Kraai and Bell rivers - Photo: Dave Claxton

Sani Pass Update
On Sunday 29th September we descended the iconic Sani Pass and for the first time, managed to capture crystal clear footage of the entire descent. Over the next month we will be producing a brand new multiple video set and YOU will be the first to see them.

The condition of the road varies greatly, depending on recent weather systems. Much of the pass has been widened and only a few sections still exist where two vehicles cannot easily pass each other. The road is however very stony and bumpy and it is still necessary to ascend with a 4WD vehicle. Having said that we saw a gent driving up in a 4x2 Ford Ranger, but he had considerable difficulty going up the switchback section - amidst flying stones, dust and lots of wheel spinning. It's really not a clever thing to do.

There is lots of small scale construction happening along the section below the SAPS border control point. New bridges have been built and some are still under construction. Where the road has been widened, the cuttings have been stabilised with shotcrete (gunite) which is unattractive, but cost effective in the long term.

No tarring has taken place at all and at this stage the entire Sani Pass is still gravel. If you are one of those adventurers who wants to drive it whilst gravel, you probably have a two year window to do so.

At the time of writing there are 6 tickets left on our final tour of the year - the Bedrogfontein-Zuurberg Tour. Join us for 3 days of spectacular passes, game viewing in the Addo national Park, sumptuous accommodation, good food and camaraderie.
For more information on pricing and online bookings please use this link: BEDROGFONTEIN-ZUURBERG TOUR.

We kept a very sharp eye on the weather forecast which showed rain was on the way. We created our routes in such a way that they could be switched around as needed and we particularly wanted to traverse Bastervoetpad in dry weather for two obvious reasons - we wanted our guests to be able to enjoy the amazing views and not struggle too much in muddy conditions.

Sunday 22nd September showed rain in the forecast, so we chose to postpone Bastervoetpad to the following day and instead we headed up the R58 towards Barkly East where some of the vehicles with smaller fuel ranges could top up their tanks, whilst the rest ambled about the village and in particular enjoyed the beautiful Dutch Reformed church close up and personal.

Leaving the comfort of the R58 it was back to gravel travel as we headed north east to view Joseph Newey's Loch Bridge which dates to 1893. This grand old stone arched bridge spans the Kraai River via five graceful arches and is one of the last period bridges still in daily use in South Africa. It is in a remarkably sound condition compared to concrete and steel bridges in the area of much newer vintage.

After the bridge, a short, steep pass has to be traversed (the Tierkrans Pass) and it is from this pass that one can enjoy views of the 7th and 8th rail reverses as well as the tall rail bridge. The rail reverses were designed by a German woman who came up with the concept that building the reverses would be much cheaper than bridges and tunnels. These reverses are excellent examples of only three to be found worldwide; the others being in Canada and China. (The link to this pass is provided lower down and is our featured pass this week which will bring this story to life).

Next up was the beautiful Ballochs Pass - and inverted profile pass that crosses the oddly named Vlooikraalspruit and from there we connected with the R393 - the main gravel road through Wartrail and on to the our 4th challenge pass - Lundean's Nek. The road has been serviced since we were last there in March 2019, which made the drive relatively easy. A dead rinkhals of at least 3m length was draped over the summit signboard, which gave some of our guests goosebumps!

Between the World Wars: Urbanisation and Segregation 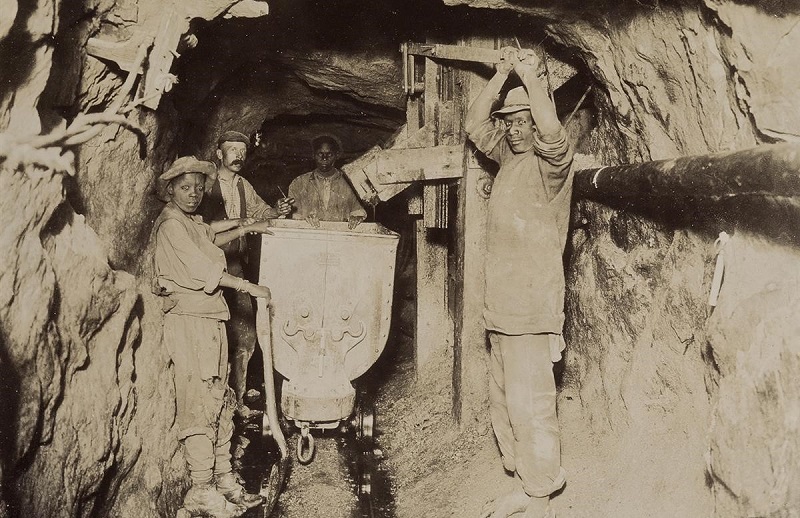 Mass urbanisation was the most important social development between World War I and World War II. The number of city-dwelling blacks more than tripled during this period, and this urban growth occurred within a context of intensifying segregation. The need for cheap labour, particularly on the mines, caused a migrant worker movement which also resulted in an unprecedented gender imbalance, with many more men working in the urban areas than women. Blacks in the cities lived in terrible conditions, with inadequate housing, poor health and transport services, and no electricity. Along with poverty came crime and white fears for personal safety.

The prevailing government view at this time can be summed up in a paragraph extracted from a report released by the Native Affairs Commission in 1921:

“It has become a truism that the native has not yet made a success of city life, but whatever views one may hold as to the desirability of having Natives as co-dwellers with Europeans in the cities, it must, we hold, be admitted that Natives are there and are likely to remain there, and that it is our duty both for their sake and for the sake of Europeans to improve the conditions under which they live. At the same time it seems only right that it should be understood that the town is a European area in which there is no place for the redundant Native, who neither works nor serves his or her people but forms the class from which the professional agitators, the slum landlords, the liquor sellers, the prostitutes, and other undesirable classes spring.”

By the 1930s, the government’s segregationist stance had hardened further, and repressive legislation had also become aimed at Indian and Coloured South Africans. In 1936, the Hertzog Bills removed from the voting rolls the few blacks that were still enfranchised in the Cape. Despite intensifying racism, respect for British legalism and liberalism inclined many early black leaders to use petitions, delegations, and other polite methods of protest against segregation. Whilst this period saw some ambiguity in the black response, protests against discriminatory policies laid an important foundation for later resistance against apartheid.

In keeping with the theme of this week's news, we are featuring the Tierkrans Pass that also features the Loch bridge and rail reverses.


NEXT WEEK - We will be featuring a reader submission. Jaco Pretorius is the first person to have been able to successfully complete the Ben 10 Eco Challenge as a runner. In a modestly related account he tells about his preparations, mental efforts and physical pain as he nailed this first prize trophy into perpetuity. Don't miss it!

Thought for the day: "Travel is never a matter of money but of courage” – Paolo Coelho