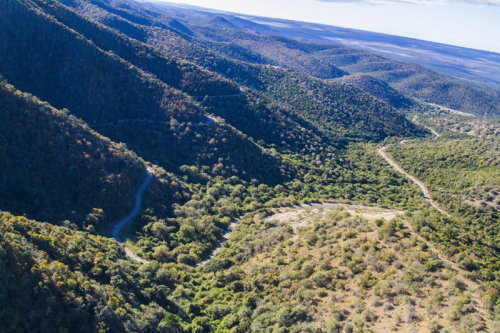 Come and drive the Zuurberg with us - Photo: Trygve Roberts

RWC 2019
It's hard not to get caught up in the excitement of the Rugby World Cup. We wish the Springboks success for the remaining matches and hope to see them in the final.

2019 has flown by and been packed with challenges. Perhaps the biggest progress we have made is in the presentation of our tours. In the space of just over a year when we launched our first day tours, these have quickly evolved into multiple day tours, where we have tried to find a happy balance between driving passes, enjoying scenery, adding in points of interest and providing our guests with affordable but quality accommodation and food. Every tour has been fully booked so we must be doing something right.

Our final tour of the year is the Bedrogfontein-Zuurberg Tour (22nd to 24th November) - a three day tour through some of the most beautiful mountain scenery in South Africa, coupled with game viewing, wonderful accommodation and some technical driving to keep everyone on their toes. You will need to have a 4x4 vehicle with low range. We have 5 tickets left on this tour.

Final arrangements and accommodation bookings have been concluded. Here is a foretaste of what's on  offer:

Thursday 21st November: Meet at 1800 at our guest lodge in the citrus farming town of Kirkwood for meet & greet, radio fitment, happy hour and drivers briefing followed by dinner.

Friday 22nd November: 08h30 Tour starts with a traverse over the Olifantskop Pass, then the gravel fun starts as we loop westwards to drive the challenging Zuurberg Pass from north to south with a lunch stop at the Zuurberg Mountain Inn. After lunch we tackle the Doringnek Pass and return to Kirkwood.

Sunday 24th November: We save the best for last as the Bedrogfontein 4x4 route will be driven. This is generally a Grade 1 to 2 drive (weather dependent) and will take the whole day to complete with a return leg to Kirkwood via the Darlington Dam and Paardepoort. Final night Chappies awards and celebrations.

If you want to review driving conditions for the two big gravel passes, here are the links to watch the videos:
Bedrogfontein Route
Zuurberg Pass.

We continue with the story where we left off 2 weeks ago at the summit of Lundean's Nek Pass. What was immediately noticeable as we started the ascent, was that the SAPS anti stock theft unit buildings had been abandoned. Either stock theft has ceased or SAPS have not found it financially viable to operate the unit any longer.

The northern descent of Lundean's Nek Pass is one of the best drives you will experience anywhere in South Africa. The condition of the road is generally reasonable, so there is time to enjoy the scenery. The road winds its way from the 2162m high summit towards the Telle River via a series of loops and switchbacks. Beautiful black streaked sandstone formations keep the road company as streams and waterfalls come into view with each new change of direction. Here you can see the influence of the Basotho lifestyle and similar to Lesotho, the herders wear a blanket with stick and gumboots being the standard attire. Their dogs all looks the same - a type of long haired Anatolian sheep-dog. Sheep and cattle appear often but the 20 kph speed makes avoiding them easy. [More lower down]

The village at the bottom of the pass - the Upper Telle Village - is spread out over the hillsides and soon a junction is reached which marks the northern end of the pass. Here we took a right and drove for 8 km all along the Telle River (the border between RSA & Lesotho) to a spot named Dangers Hoek. A short, steep (unnamed) pass took us to a level plateau area where we were able to safely park all the vehicles and enjoy the phenomenal views. Another 4 km along the same road gets you to the Telle Falls, which we elected not to go to as the rivers were mainly dry and time was running short.

Driving back over Lundean's Nek is a completely different experience as the views have a new perspective. Soon we were back in the Wartrail valley and looking for a suitable place to enjoy a lunch break. The Wartrail sports club have a nice big level open parking area surrounded by tall trees, which made it an easy choice. The only person there was a local cleaning lady who welcomed us with a big smile and gave us permission to make use of the toilets.

There is a shield inside the clubhouse and the oldest plaque dates back to 1914! The club is apparently THE social meeting place for the local farmers and the tennis courts were in immaculate condition. If you pass there on a Saturday, do stop in as you will be made to feel most welcome.

Next week we tackle the ascent up Volunteershoek Pass. 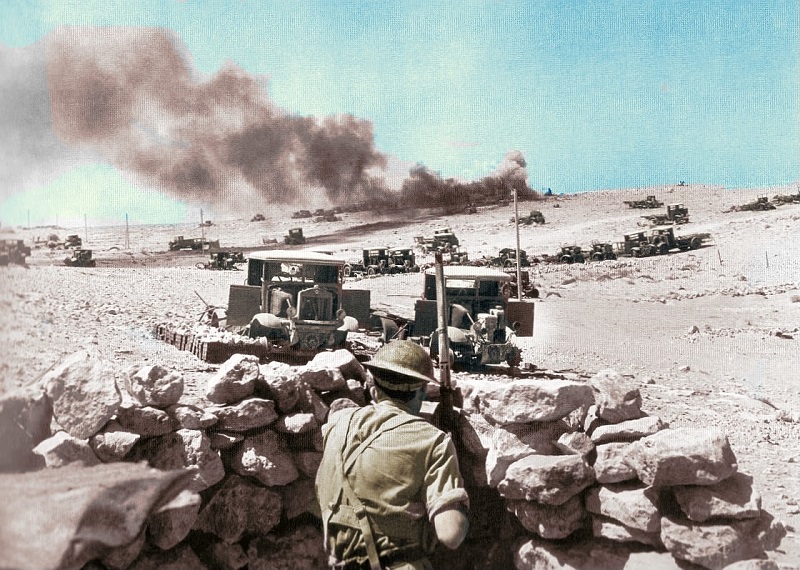 On the eve of World War II, the Union of South Africa again found itself in a unique political and military quandary. Whilst closely allied with Great Britain, being a co-equal dominion under the 1931 Statute of Westminster with its head of state being the British king, the South African Prime Minister in September 1939 was J.B.M. “Barry” Hertzog, who was both pro-Afrikaner and anti-British.

Hertzog's problem was that South Africa was constitutionally obligated to support Great Britain against Nazi Germany. When Adolf Hitler's forces attacked Poland on 1 September 1939, a short but furious debate unfolded in the parliament of South Africa. It pitted those who wanted to enter the war on Britain's side, led by Jan Smuts, against those who wanted to keep South Africa neutral, led by Hertzog.

On 4 September 1939, the ruling party caucus refused to accept Hertzog's stance of neutrality in World War II, and deposed him in favour of Smuts. Upon becoming Prime Minister on the 6th of September, Smuts declared South Africa officially at war with Germany, and immediately set about fortifying the country against any possible sea invasion, given South Africa's global strategic importance in controlling the long sea route around the Cape of Good Hope.

The declaration of war on Germany had the support of only a narrow majority in the South African parliament and was far from being universally popular. Indeed, there was a significant minority actively opposed to the war and, under these conditions, conscription was never an option. The expansion of the army and its deployment overseas depended entirely on volunteers.

In September 1939, the South African Defence Force numbered only 5,353 regulars, with an additional 14,631 men of the Active Citizen Force which gave peace time training to volunteers and which in time of war would form the main body of the defence force. Pre-war plans did not anticipate that the army would fight outside of Southern Africa, and it was trained and equipped only for local warfare. But South Africans emanate from a long and proud tradition of fighting men, and about 334,000 of them eventually volunteered for full-time military service in support of the Allies.

Given the country's attitudes to race at the time, the enlistment of fighting troops from the much larger black population was hardly considered. Instead, in an attempt to free up as many whites as possible for the fighting and technical arms, a number of corps were formed to provide drivers and pioneers, drawn from the more acceptable Coloured and Indian populations. These were eventually amalgamated into the Cape Corps. A Native Military Corps, manned by blacks, was also formed for pioneer and labouring tasks. For some of their tasks, individuals were armed, mainly for self-protection and guard duties, but they were never allowed to participate in actual combat against the Germans and Italians.

During World War II, South Africa's ports and harbours, such as at Cape Town, Durban, and Simon's Town, were important strategic assets of the British Royal Navy. South Africa's top-secret Special Signals Service played a significant role in the early development and deployment of the radio detection and ranging (“radar”) technology used to protect the vital coastal shipping route around southern Africa. By August 1945, South African Air Force aircraft had intercepted 17 enemy ships, assisted in the rescue of 437 survivors from sunken vessels, attacked 26 of the 36 enemy submarines operating the vicinity of the South African coast, and flown 15,000 coastal patrol sorties.

South African ground troops fought with the Allies in many different operations and locations, including Madagascar, Italy and North Africa. A number of South African fighter pilots served with distinction in the Royal Air Force during the Battle of Britain, not least of whom was Group Captain Adolph “Sailor” Malan, who led 74 Squadron and who personally destroyed 32 enemy aircraft. The top South African pilot ace during the course of the war was Marmaduke “Pat” Pattle, credited with more than 50 victories. He was shot down and killed whilst engaged in a dogfight over Piraeus Harbour in Greece, on 20 April 1941.

Total South African casualties during World War II amounted to 12,046 dead (including 4,347 killed in action or died of wounds), 14,363 others wounded, and 16,430 captured or missing. More than 7,000 South Africans were decorated or mentioned in despatches. Located far away from the main theatre of the war, the country itself suffered no civilian casualties or physical damage.

Jan Smuts was the only non-British general whose advice was constantly sought by Britain's war-time Prime Minister Winston Churchill, and he was invited to join the Imperial War Cabinet in 1939. On 28 May 1941, Smuts was appointed as a Field Marshal in the British Army, becoming the first South African to hold that rank. When the war ended, Smuts represented South Africa in San Francisco at the drafting of the United Nations Charter in May 1945. Just as he had done in 1919, Smuts urged the delegates to create a powerful international body to preserve peace; he was determined that, unlike the League of Nations, the UN would have some teeth. Smuts also signed the Paris Peace Treaty which resolved the peace in Europe, thus becoming the only signatory of both of the treaties which had ended World War I and World War II.

FEATURED PASS OF THE WEEK
Hidden in the mountains near Wartrail and New England is a delightful gravel pass which is often overlooked by the majesty of the 10 challenge passes. This was one of several bonus passes which we included in our recent Ben 10 Tour.

Sprinkaannek - a very minor gravel pass in the Free State

Telemachus Poort - a scenic tarred poort on the N6 near Jamestown in the Eastern Cape.

Words of Wisdom: "The goal is to die with memories not dreams” - Unknown