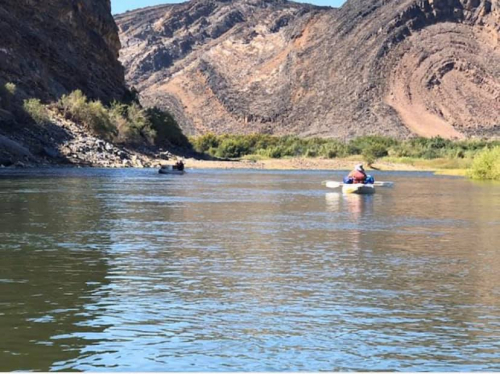 Near Vioolsdrif on the Orange River - 53,7C - Photo: Wikipedia

* Hottest temperature ever recorded in SA?

* Podcast - a talk on the Katse Dam, Lesotho

Hotazel (Hot as hell) is not quite as hot as Vioolsdrif it would seem, although both are in the Northern Cape, where the official SA weather station recorded a temperature of 53,7C on the 29th November. We posted that information on our FaceBook page early the next morning. The post was read by 32,601 people and generated 126 comments - both for and against climate change theories. It's obviously quite an emotive topic. Now we have people saying the reading couldn't have been accurate as the Namibian weather station at Noordoewer on the opposite bank of the Gariep registered 10 degrees lower. Facts are facts. Latest information on the matter is that the equipment at Vioolsdrif is going to be scientifically tested for accuracy.

The Silly Season is upon us!

It's that time of year when city folk flee the concrete jungle to unwind at the coast, but it's the annual levels of irritability, road rage and over indulgence that sees the death toll peak on ur roads each year. This year will be no different. Make sure you don't become a statistic. How about planning a route to your destination on the quieter back roads. You can easily do this by making use of our Master Map. Not only will you be avoiding the dangers of the highways but you will arrive more relaxed and you can make the journey so much more fun. Try it!

This year we decided to get involved with the Black Friday concept by offering a 50% reduction in subscription rates. Over the 3 days we gained 79 new subscribers, proving that if your offer is excellent, your sales will boom. Welcome to all the new subscribers!

Lesotho-Sani Tour (Chapter 3)
As we continue with our journey through Lesotho, the second pass we needed to drive was Lekhalo La Molimo Nthuse - more commonly known as 'God help Me Pass'. Whilst the English name is sufficient to have some drivers gravely concerned of what's to come, the reality is that the new tarred version makes driving it a simple matter. This pass rises 382m to summit at 2332m ASL. It's also a moderately long pass at 8.2 km.

Like most of the big passes in Lesotho, it is subject to winter snowfalls and ice on the road. It has 31 bends, corners and curves of which 8 are greater than 90 degrees and of those 8 there are 4 bends of 180 degrees. Some of the gradients on this pass get as steep as 1:5 and we found ourselves often having to gear down to 2nd, despite having a 4.5 litre engine providing power.

Just as the pass comes to an end, you start the next pass - the Blue Mountain Pass (or Lekhalo La Thaba Putsoa). This is the second biggest of the 4 passes on the A3 before reaching the Mohale dam.

There are plenty of bends, corners and curves to keep you busy - a total of 95 of them and of those 12 are greater than 90 degrees, which include two hairpin bends. This is a long pass at 18.3 km and it also has steep sections at 1:6 which will have your vehicle gasping for air. It summits at 2642m and offers spectacular views. 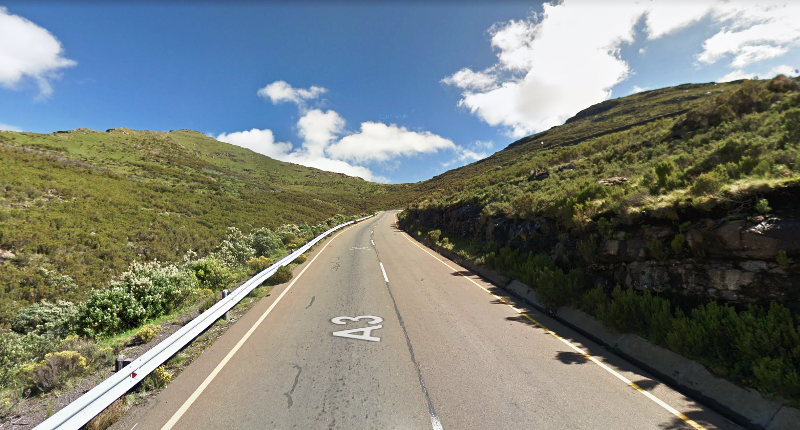 This pass has a long, steep descent of almost 5 km, and it remains steep all the way to the village at the foot of the pass. It's best to gear down and run against engine compression to save on the overuse of the footbrake. It's important to know that brake fluid's boiling point decreases as altitude is gained. Therefore, on high altitude passes with long and steep descents, brake failure is a substantial risk. It's best to get into the habit of running against engine compression. Rather know that your brakes will be effective when you really need them. This is even more important if you are towing a heavy trailer or caravan.

There is one more pass to traverse before reaching the Mohale Dam. The Likalaneng Pass is huge, making the previous three passes quite small by comparison. It climbs a whopping 811m over 26.8 km to summit at 2636m ASL. As progress is made into the south-east, the mountain views are stupendous. It's almost too much to take in on one day. From the end of this pass the road winds all along the spine of a long ridge, where a good quality side road provides access to the Mohale dam (which we covered in some detail in last week's newsletter). We made use of the facilities at the lookout point and enjoyed a lunch break overlooking the impressive dam wall. We had dam engineer Pierre Storey, on the tour with us who was in seventh heaven!

But the afternoon would provide another few hours of exceptional driving over yet more passes. Cheche's Pass popped up on the GPS at the 169km mark. It's another long pass at 19 km and climbs 728m to summit at 2553m ASL and then one final pass required our concentration, which was the Mokoabong Pass. This one is quite bluntly, a monster of a pass. It is 41.5 km long; climbs 692m and summits at 2884m, which is higher than Sani Pass.

The pleasures of the Katse Lodge awaited and sundowners overlooking the Katse Dam was just the right medicine to end an incredible day of pass driving and sightseeing. [Next Week: Katse Dam]

This lovely tour was our final offering for 2019 and it turned out much better than we anticipated. This was mainly due to high quality game sightings, great weather and an exceptionally easy going group of people who got straight on with the task of having fun.

We gathered at the Kronenhoff Guest Lodge in Kirkwood and overnighted there on each night of the tour. That meant we could travel light and return to serviced rooms at the end of each day. We had an interesting mix of vehicles on this tour - Two Suzuki Jimnys (one of them being the new shape); three Toyota Landcruisers; a Jeep Wrangler and a Range Rover V8 Sport. After a relaxed driver's briefing and radio fitments completed, it was happy hour, dinner and an early night in preparation for the first day.

Friday 22nd November: 0830 - Everyone was punctual and after a radio-check our convoy rumbled down the main road in Kirkwood in perfect blue-sky weather. We headed through Addo and from there followed the main tar road to Paterson - a tiny and almost forgotten Eastern Cape village. The road bisects parts of the main Addo National Park and we were treated to various game sightings on either side of the fence, but it is the warthog which seems to be the most prolific animal in the area as they have flourished in recent years. Other sightings included zebra, giraffe, red hartebeest, springbok and buffalo.

Paterson came and went as we headed up the big tarred Olifantskop Pass on the N10 main route northwards. This is statistically a dangerous pass and many serious accidents take place here, mostly involving buses and trucks. There are a total of 34 corners, curves and bends on this pass, 15 on the northern side and 19 on the southern side. This averages out at one corner every 288 metres, so not much of this road is straight! Given these and the other hazards on this pass, it would be wise to slow down to the posted speed limit of 60 kph, and to enjoy the magnificent scenery all along this traverse.

Soon after the end of the pass we turned left onto a quiet gravel road and deflated our tyres. The drive into the west was pleasant as the morning sun was behind us and game sightings were plentiful. A word of advice on accommodation options in the area. Lodgings in Addo come at a premium and almost everything was booked out when we made inquiries three months ago. However, a bit of patience and diligence reveals that as you move further away from Addo, the prices improve and options are more plentiful. We were absolutely delighted with our base (Kronenhoff Guest Lodge). It is a 4 star establishment; the food was good; the service was great and the management were always available to make sure everything ran smoothly. We highly recommend it. (The drive through to Addo takes only 20 minutes on a good quality tar road)

At the end of the gravel road, we reached an intersection, requiring a left turn (south) to start our main attraction of the day - the rough, historical Suurberg (or Zuurberg) Pass. At the start of the pass is a very old double story Victorian house, dubbed Anne's Villa. It's one of the country's oldest coaching inns, built in 1864. It's a national monument where all self-catering rooms are furnished with bedding and towels, but guests have to bring their own food and drink.

Ann's Villa is an excellent destination for those looking for somewhere historic and interesting, a place to immerse themsleves in 19th century South Africa. The house can be booked as an entire unit or as individual rooms. Guests can shop in the original 1864 general goods store or explore the history of blacksmithing and wheel-making in the blacksmith museum. Guests can also visit the historic graveyard.

[Next week: Tackling the Suurberg Pass]

Podcast: A chat about the Katse Dam, Lesotho. Click to listen.

Goreeshoogte - an easy pass on the R60 in the Robertson winelands.

Thought for the day: "You have to be strongest when you are feeling at your weakest"