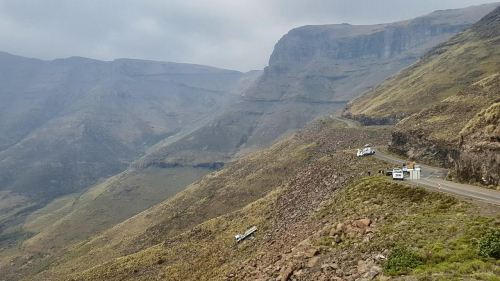 Recovery of a truck near the summit of the Mafika Lisiu Pass - Photo: Tracks4Africa

* Gift a special friend with a lasting gift

* Featured pass of the week - Witsieshoek

Merry Chistmas!
2019 has been a long, tough year for many South Africans and in many cases the phrase "money's too tight to mention" applies. The weak economy has taken its toll in every sphere. From the MPSA point of view we have done our best to keep our prices of all our products as affordable as possible and intend continuing in that vein for 2020.

We wish you and your family a peaceful and blessed Christmas. Stay positive and focus on the good all around you. It is possible to avoid negative news to a large extent. We attempt to only post positive uplifting material and that formula seems to be working for example on our FaceBook page which more than doubled in followers this past year. That growth has been exponential.

Don't miss next week's news release on the 26th December, where we will turn back the clock and review the year that was.
Until then, be safe & drive defensively.

Give someone a classy Christmas gift that costs just R300

Click on the link > Fill in the details of the recipient > Add your message > Pay with your card or do an EFT > Voila! Christmas shopping done. The recipient will remember your thoughtful gift for a full year and beyond. 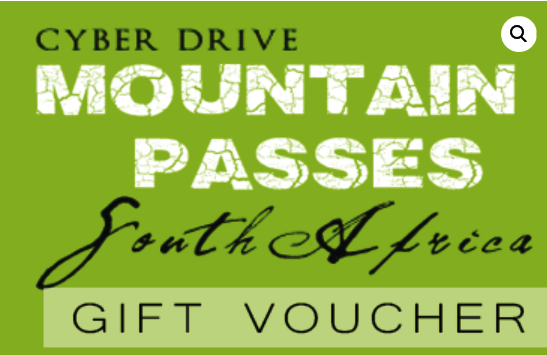 With the tour of the Katse Dam completed we were a little pressed to make up some time and several big passes to conquer. As we bade farewell to the charms of the Katse Lodge, we commenced almost immediately with the first pass of the day - the Nkoabee Pass.

The altitude variance of 624m means lots of ascending and descending and although the road is tarred, caution needs to be exercised in terms of traffic volumes and the very real possibility of finding livestock on the road.

Starting in the north, the pass starts at the apex of a tight left-hand bend near the runway of the Seshutes Airport. The road heads south, steadily gaining altitude as it worms its way in and out of the side ravines. Although the ascent is long at 6.1 km, the climb gradient is comfortable, seldom exceeding 1:14. The river visible along the ascent is the Matsoku River.

[Click here to read the rest of this story...]

The summit point of 2530m ASL comes up at an obvious neck, where the road swings quickly towards the west, where magical valley views await, as the descent commences following this big valley for the next 6 km. The gradient is gentle at first but starts getting steeper from the 9th km. In the far distance the sparkling blue waters of the Katse Dam can be seen.

One barely has a chance to discuss the first pass of the day, when the next one makes its appearance.

Although the Laitsoka Pass is not the highest, if offers magnificent scenery and includes the crossing of the high-level bridge over the upper reaches of the Katse Dam. The pass is long at 14.7 km and contains 75 bends, corners and curves, of which 16 exceed 90 degrees, but there are no hairpins.

The passes seem to melt into a blur of exquisite scenery, each pass seemingly bigger and better than the preceding one. The Mafika Lisui Pass is on a grand scale with rather impressive statistics. It's very long at 26.2 km and climbs a staggering 1104m to summit at 3096m. This pass was tarred and realigned at the time of the construction of the Katse Dam and formed an integral part of the Katse success story. The road is jam packed with corners and once your vehicle is past the 2500m mark, the oxygen starved air starts to take its toll on available power. Almost all the vehicles in our 14 strong convoy had to gear down to 1st gear several times on the way to the summit.

There is a spacious view-site at the top which offers incredible sweeping views over the mountainous countryside. In the vicinity is a very interesting cave - the Liphofung Cave (the name means “place of the Eland”) occupies an important place in Lesotho history. The cave is, in fact, a large sandstone overhang, which is a typical feature of the Lesotho lowlands region.

Originally used by the San and other Stone Age people, the walls contain important rock art and a rich archaeological deposit of Stone Age implements. Later, King Moshoeshoe “the Great” used the cave as a stopover when visiting this part of the kingdom. This particular site lies in a tributary stream valley of the Hololo River just off the main route from Butha-Buthe to Oxbow and Mokhotlong. Access is by means of a newly constructed concrete road and is passable for all vehicles.

A small visitor’s centre incorporating a display of Basotho culture and San rock art has been developed, along with ablution facilities and a small shop. The site is proving to be a popular destination with school groups and tourists enroute to Oxbow and AfriSki. The site was developed almost entirely with local labour and artisans. This means that most of the development costs have been ploughed directly back into the local community. This, in turn, has led to a very strong sense of ownership of the facility by the local communities.

[Next week we drive the Moteng Pass]

The anchor pass on day one of this tour was the traverse of the Zuurberg Pass (Suurberg Pass). The road is rough in places and having a high clearance vehicle is mandatory but 4WD is not really necessary in fair weather. After passing the beautiful old Victorian homestead of Anne's Villa, the pass immediately begins climbing and the road quality deteriorates markedly.

The first few kilometres consists of some big switchbacks and then the road finally levels off on the top of a high, grassy ridge. The road initially heads south, then gradually turns into the west. So if you ever want to drive this pass it's best to drive it from north to south in the morning, so the sun is behind you.

Anne's Villa on the northern side of the Suurberg Pass

Game fencing can be seen on the left as the road meanders along a contour line and it was on this section, with very steep slopes that we spotted three giraffe. Normally these animals favour the flat wooded plains, so it must have been something tasty that lured them up the steep inclines of around 1:3.

Once over the summit point, the pass becomes more interesting as the first big descent commences, winding laboriously through the ravines and noses. It is on this section that the old dry stone packed walls can be clearly seen. As this twisty section is completed, the road drops down quickly towards a set of farm buildings close to the road on the left. This intersection is an important one and by going straight offers one an escape route back to the N10.

But the traverse of the Zuurberg Pass is only halfway done, so the right hand option at the fork must be taken to remain on the Zuurberg Pass. Another big climb follows as the road begins the ascent of the Zuurberg Mountains. The views are vast and as was the case on the day of our tour, we did not see another vehicle the entire day. It's something to bear in mind when travelling alone.

The direction for the next 9km switches into the east and once the road crosses over onto the southern side of the mountain, a magnificent new set of views opens up on the right. The road remains virtually level for that entire 9 km, but there are many bends to contend with. This second half of the pass is generally in a better condition than the first half and also allows for a slightly improved average speed to be maintained.

After the 9 km of easting has been completed there is an abrupt change in direction back into the south as the descent into the middle valley commences. The vegetation becomes denser as altitude is lost and finally a small river is crossed. Immediately after the river crossing a new building is being constructed on the left. It is attractively constructed from local stone and is apparently going to be some sort of an open air heritage museum. There are toilets and water available.

The last climb out the valley is quite steep and soon a dark slab of rock hugs the left hand side of the road. It is here that Mr. Woodifield's name is carved into the rock to commemorate the completion of the pass. Woodifield was the engineer in charge of the project.

A few hundred metres later we reached the end of the Zuurberg Pass and stopped our convoy at the lovely Zuurberg Mountain Inn, where we spent a leisurely lunch break in the lovely old hotel. So far, so good. No punctures or mechanical issues, so after lunch we descended the Doringnek Pass (which is an excellent condition, other than some corrugations) and rejoined the tar road at Addo and from there back to Kirkwood for a swim and siesta before the nights festivities began.

Featured pass of the week
Mike Leicester filmed this big Eastern Free State pass in perfect weather in February 2019 and we have finally produced the new three part video set, which adequately shows the condition of the road as well as the stellar views on offer. It's well worth watching.

Words of wisdom: "Trust because you are willing to accept the risk, not because it's safe or certain." --Anonymous