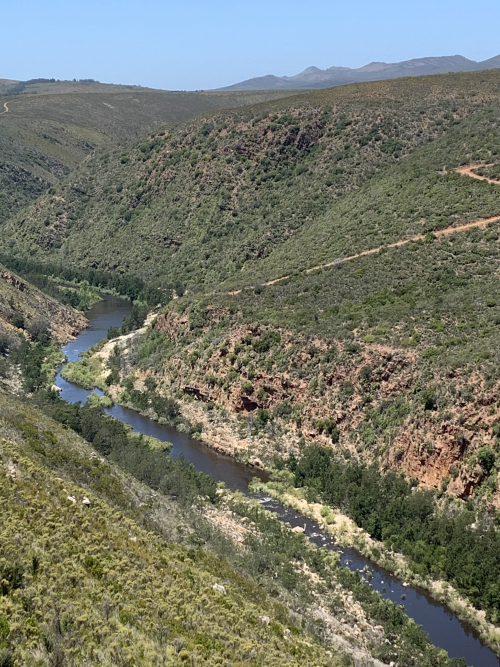 From the team at Mountain Passes South Africa, we wish you a year of health, happiness and of course - travel. The year ahead is filled with the promise of exciting challenges and it's so often one's attitude that makes all the difference when it comes to achieving goals. So don't go on a diet, but rather make a lifestyle change so that it's permanent. Don't procrastinate, for as we all know a 'draadsitter' is not a cool person. Make decisions. Do those trips. Live your dreams. Take risks. Apologise. Forgive. Dream. Love and respect your fellow man/woman.

Each January we review our pricing on goods and services and adjust where applicable. We are exceptionally conscious of retaining our current subscribers and to reinforce that we are only increasing our 12-month subscription renewals by R10. This brings renewals to just R280. The rate for new subscribers will be R350 for the 12-month subscription, and for those choosing the 6 month option, it will be R250.

We have expanded our gifting options to include coffee mugs, T shirts, Golf shirts, caps and Gift Vouchers. For those that have completed the Ben 10 Eco Challenge, we have a separate range of souvinier gear.

This newsletter will be published every fortnight in future as opposed to once per week, but will retain the same format that you are accustomed to.

The third day of the tour saw a perfect 'blue sky' day with no wind and pleasant temperatures. Our convoy rolled out of the new Oxbow Lodge bang on time and headed south-east to tackle the 11th pass of the tour - the Mahlasela Pass. Not many people know this, but this pass is the highest pass in Lesotho at 3279m ASL with a big ascent of 740m. Once again it was a question of having to engage 1st gear to get up some of the steeper sections in the oxygen starved air. It's another long pass at just under 18 km with magnificent scenery.

As the pass is completed Afriski Resort makes its appearance. We were doing good time, so we popped in at Afriski for a look around. Situated in the heart of the Maluti Mountains, this luxury resort caters to every taste and offers the perfect escape for sport and outdoor enthusiasts, corporate parties as well as families. With a selection of accommodation options, as well as a range of on-site facilities and restaurants, Afriski has everything needed for the perfect mountain getaway. In summer, ambitious mountain goats explore the peaks in pursuit of a wide range of outdoor endeavours. The resort welcomes mountain bikers, trail-runners, hikers, fly fishermen as well as enduro and off-road enthusiasts. Multiple trails, paths and streams await discovery. When the seasons turn and the cold descends, the ski slopes come to life, and log fires in the evening provide time to unwind, kick back and relax. [More lower down...]

Soon we were back on the road ready to engage the 12th pass - LEKHALO LA LITHUNYA (Pass of Guns). The altitude variance is relatively small (by Lesotho standards) at 234m but it's another long pass at 11,4 km and summits at a lofty 3246m.
During the early 1900's a small war took place here between two rival chiefs and this original path was used to get guns to and from the various defensive points, hence the unusual name.

The Tlaeeng Pass and our 13th pass, has a fairly minor altitude gain of 140m and only one hairpin chicane section. Other than those, the pass is easy enough to traverse, but what makes this pass stand out from the rest is its maximum altitude of 3262m which makes it the 2nd highest pass in Lesotho. This road is also known as the Oxbow-Mapholaneng Road.

Letseng processes ore from two kimberlite pipes, Main and Satellite, both bearing extremely low-grade ore (averaging under two carats per hundred tonnes), as well as from existing stockpiles. The mine currently processes around 6,439,000 million tonnes of ore, producing a little over 126,000 carats per annum.

Letseng is also renowned for its production of historic diamonds. In January 2018, a 910-carat white diamond, the “Lesotho Legend”, was recovered, becoming the fifth largest diamond in the world. In August 2011, a 550-carat white diamond, the “Letseng Star” became the fourth major recovery at the mine since the 2006 Gem Diamonds takeover. It was preceded by the 478-carat “Leseli la Letseng” (“Light of Letseng”) in 2008, the 493-carat “Letseng Legacy” in 2007 and the 603-carat “Lesotho Promise” in 2006. Letseng has thus produced five of the largest rough white gem diamonds on record. In addition, the 601-carat “Lesotho Brown” was recovered in 1967.

Unusual for Africa, and due to the elevation, temperatures at the mine drop to -20 °C, and snowfalls are common in winter.

[More on this tour next week]

After another excellent meal at the Kronenhoff Guest House in Kirkwood, we had our guests ready to roll a little earlier for the final day of the tour which promised to be a long day as the going is very slow. It took us just 5 minutes to reach the Sanparks control office, where we were greeted by a friendly Xhosa lady who assisted us with processing all the permits. The price was R620 per vehicle plus conservation fees per person, the latter which is waived for persons holding a Wild Card. A reminder to anyone wanting to drive this route is that Sanparks only take cash and it's not possible to buy a permit at the Addo main reception. It's also best practice to have the correct amount of cash as in our case, we were the first group of the day and change wasn't readily available.

With the formalities completed we drove west on yet another perfect fair weather day. Within the first kilometre, the first kudu was spotted and after that game sightings were plentiful and included a close up of a black backed jackal. We detoured off the route to visit the Kabouga house, which nestles in a narrow kloof in an exquisite spot. This is the only fixed accommodation building within the Bedrogfontein section and can sleep up to 6 people. A little further to the south is the Mvubu campsite which is on the river and better suited to bigger groups.

Once back on the main route, the track deteriorated fairly quickly, slowing our average speed right down to about 20 kph. The valley was bone dry and not a single river had any water in it. The one tricky section which involves driving over large loose boulders was dealt with easily by all the drivers, allowing the guide (aka your scribe) to breathe a sigh of relief.

The road then enters a side ravine, which has dense vegetation where the track and the stream have to share the narrow space between almost vertical cliffs. It was also the spot that Jan Smuts' commando chose to ambush the British forces who were pursuing them. The Battle of Bedrogfontein took place here with the British forces losing hundreds of men and horses. Only one Boer was wounded. The stench of death in the valley in the months after the battle was so bad, that no one could use the route.

The fraud part of the name Bedrogfontein relates to a stream or fountain which disappears underground and is then extremely difficult to find lower down the mountain - hence those who sought the thirst quenching waters always felt defrauded when they couldn't find the stream. 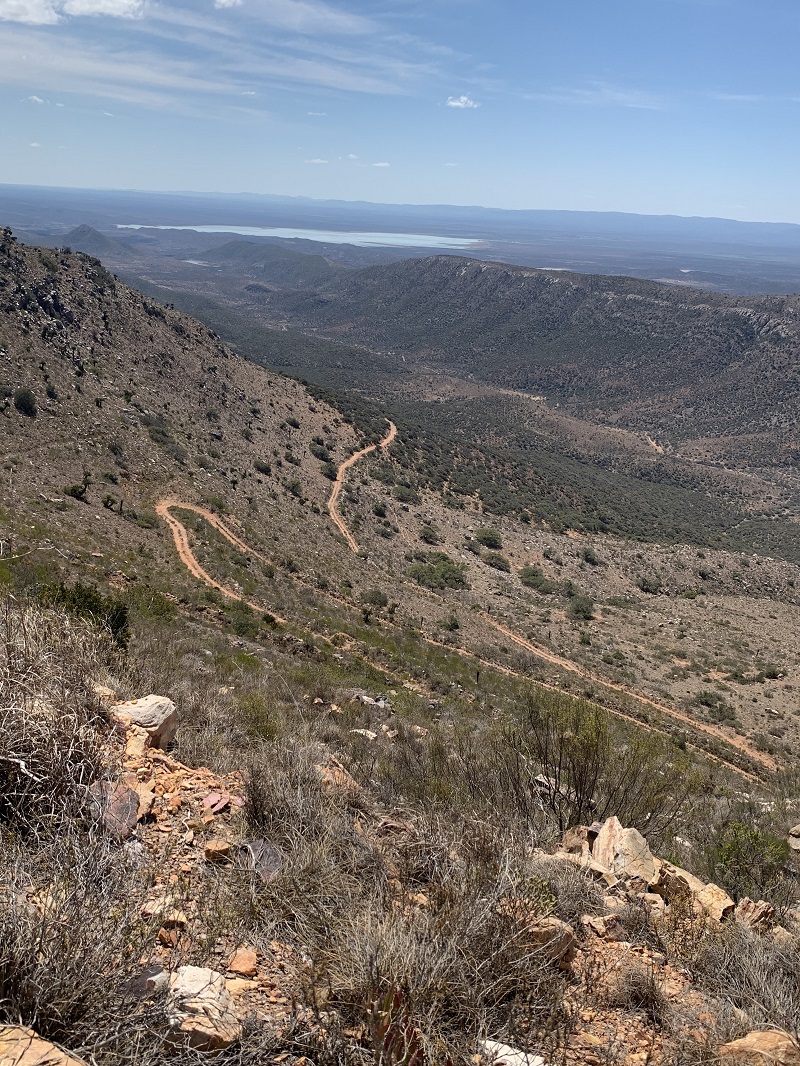 Views from the summit of Bedrogfontein Pass looking north west.

We stopped for lunch at a level clearing but without much shade on offer. We managed to locate one of the fountains that Smuts' men used and where their names can still be seen carved into the nearby trees. The route begins climbing very steeply from this point as it ranges ever upwards via multiple switchbacks. The views open up once out of the valley and the scenery is impressive to the east with ridge upon ridge of green clad mountains fading away into the distance.

Finally we reached the summit point where we took a short break for photos and a leg-stretch. One of the convoy vehicles, a Range Rover had picked up a sidewall cut in the LR tyre, which after careful inspection, we decided was OK to continue,  as the vehicle has onboard tyre pressure monitoring equipment, the driver could keep an eye on things. As it turned out it was safely driven all the way back to Port Elizabeth on the damaged tyre, but at a slow speed to ensure a no blow-out scenario. Changing a tyre on a steep, unstable slope is never a good idea unless absolutely necessary.

Also at the summit were large animal droppings - either rhino or elephant. It was fairly fresh, so were hoping to get a rhino sighting. The descent into the northern drier section consists of 11 switchbacks, each pinned by a very sharp hairpin, requiring full lock on most of the vehicles. Once safely down the mountain, we found three elephants huddling under the shade of a thorn tree, right next to the road, allowing us to all get good photos - no doubt the depositors of sundry goods at the summit !

Our route took us past the Darlington Dam, which looked quite full with a plume of spray at the outlet point, feeding water into the Sundays River for all the citrus farms in the Kirkwood area. The dam is fed per tunnel from the Fish River system, which is thanks to the foresight of our government planners in the 1950's - lest the farming industry in the valley would have been a disaster without this system.

We drove back east to Kirkwood via three charming poorts - all of them called Paardepoort. We managed to film all three the following day and they will be produced shortly and published on the website. We arrived back at base at about 1700 with enough time to refuel, reinflate tyres, have a shower and enjoy our Chappies night. This was an excellent and faultless tour and one we will most definitely be repeating soon.

Featured pass of the week: Following in the theme of last week's pass, we continue heading north on the P1600 from Kareedouw over the Suuranysberg Pass to traverse the gorgeous Kouga River Pass. Watch the video and add to bucket list!

Thought for the day: "The world is a book and those who do not travel read only one page" - Augustine of Hippo