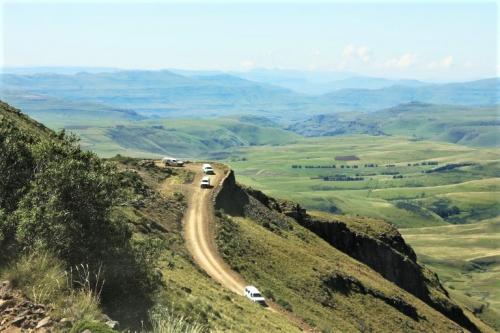 Our first major tour for the year has just been loaded - the Ben 10 V3 Tour. We have added in an extra day for this tour making it more relaxing. The tour will be run over the Easter weekend, so if you have had your eye on this one and missed first two tours, jump on the bus Gus and set yourself free. Get all the details, prices, etc from this link: BEN 10 V3 tour.

In mid March we will heading off to the Baviaanskloof - but a tour with a difference. We will driving up from the Kareedouw side in a northerly direction via the Kouga 4x4 route and enter the Baviaans at Doringkloof. From there we will be heading east through the bioreserve to Bruintjieskraal, then north again to the top of the mountains, then head west via the Antoniesberg Pass and end at Steytlerville. This tour will be loaded in the next 10 days.

We've also been hard at work creating our inaugural Wild Coast Tour. This will be a full 7 day tour of Wild Coast magic taking in some of the area's best and most remote gravel passes as well as most of the best scenic attractions, with comfortable overnight stays in hotels like Kob Inn, Trenneries and Coffee Bay. We are planning this tour for May. This tour has already sparked wide interest and will be loaded onto our tours page within the next fortnight.

History - Jack the Baboon. A bit of true Africana 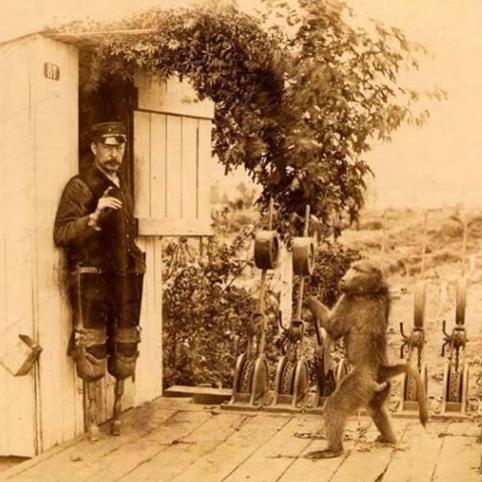 James Wide and Jack getting the signals right
During the latter part of the 1800s, travellers to Cape Town, along the Port Elizabeth mainline railroad, frequently saw a curious sight as they entered the Uitenhage train station.

The signalman operating the levers that set the signals in the control tower was a baboon named Jack.

As strange as it may seem, Jack was an employee of the railroad. He belonged to James “Jumper” Wide who worked as a signalman until he lost both legs in an accident. Wide earned the nickname “Jumper” due to his habit of jumping from one railway car to another and sometimes swinging from railcar to railcar. One afternoon in 1877, near Kleinpoort in the Eastern Cape, he attempted to leap to another car and fell underneath the moving train. The massive metal wheels of the train severed both his legs.

Jumper was devastated. Not only had he lost his legs, but he would be of no use to the railroad. He took a post as signalman at Uitenhage station, where he made himself two pegged legs he carved from a piece of wood, and built himself a small trolley he used to get around. Still, he was limited on how well he could perform his job.

One afternoon he was visiting the marketplace in Uitenhage where he saw a baboon leading an ox wagon. He met the owner who demonstrated how smart the primate was. Soon, Jumper was convinced the baboon could serve him well. He pleaded with the owner to let him have the baboon. The owner didn’t really want to give up his favourite pet, but he felt sorry for the crippled man.

He gave the baboon to Jumper and thus began the most unusual friendship in the railroad’s history. The two lived in a cottage a half mile from the railroad depot. Each morning Jack would push Jumper to work on the trolley. He would push the trolley up a hill and once on top of the hill, Jack would jump on the trolley for a fun ride as it rolled quickly down the other side of the hill. Once at work, Jack operated the signals that instructed train engineers which tracks they would take.

Wide kept an important key in his signal box. It unlocked the points that enabled locomotive drivers to reach the coal-sheds. Whenever a driver wanted it, he gave four blasts on his whistle and Wide would trotter out on his crutches and hold up the key. Jack watched this performance for a few days, then raced out with the key as soon as he heard the four blasts. Thereafter it became one of his duties.

Finally the time came when Wide was able to entrust the signal levers to the baboon. Wide would hold up one or two fingers and Jack would then pull the correct lever. He always looked at his master for confirmation. In the end, the baboon needed no instructions from his master. Jack really knew which lever to operate for each approaching train, and caught the various offerings thrown to him by passengers.

The working relationship between Jumper and Jack worked well and the two forged a strong friendship. Many locals would go to the tracks to see if the story of a baboon working the signals was true. Most marvelled at how well Jack performed his job.

He knew the difference between the “home” and “distant” signals, and also the engine whistles; and although he was always under the eye of his master, he never made a mistake or required telling twice. Jack was one of the sights of Uitenhage for many years, and his astonishing feats of intelligence were the wonder of all who witnessed them.

Then one day, a prominent lady on route to Port Elizabeth observed Jack working and was horrified at the prospects of a baboon running the signals. She notified the railroad authorities who were unaware Jumper’s assistant was an ape. At first they did not believe her wild story until the system manager and several authorities visited the station. Jumper and Jack were immediately fired.

Jumper pleaded for their jobs and the system manager agreed to test the ability of Jack. An engineer was instructed to blast his train’s whistle signalling Jack to change the correct signals. Jack made all the changes without fail. He even looked around in the direction of the oncoming train to make sure that the correct lever and signal were changed.

Jack passed his test with flying colours and the railroad system manager was so impressed he gave Jumper his job back and even hired Jack who became the only baboon in history to go to work for the railroad. From that day forward, Jack was known as Jack the Signalman. For his labour, he was given monthly rations from the government but he also received an employment number. In the 9 years Jack worked for the railroad and his legless master, he never made one mistake that resulted in an accident.

Around Jumper’s cottage Jack learned to perform other tasks such as removing rubbish and sweeping the kitchen floor. He also turned out to be a very good watchman. Intruders were greeted by a fierce guard who gnashed his teeth and snarled ferociously to frighten away unwelcome visitors.

Jack died in 1890 after developing tuberculosis.

Amongst the big challenge passes of the Eastern Cape, there are many more smaller passes (but big enough in their own right) which get overlooked and overshadowed by their bigger and more famous siblings. Our featured pass today can be accessed from Naude's Nek Pass and offers stunning views and some exciting driving after rain. It's well worth the slight detour and is followed by the beautiful Luzi Poort. Add it to your bucket list.

Thought for the day: "You will never reach your destination, if you stop and throw stones at every dog that barks" ~ Winston Churchill