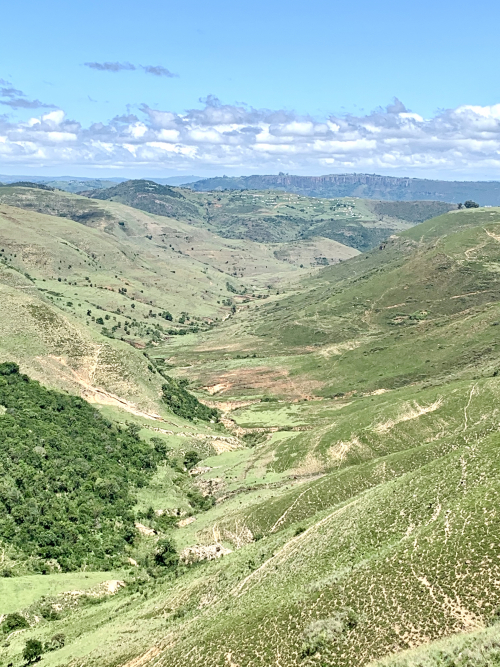 Ben 10 Eco Challenge V3 Tour - We've had a cancellation, so there is 1 place available.

Use the hyperlinks above for more information and online bookings.

There were lots of emails to answer the next morning and downloading film clips from the GoPro took much longer than anticipated, leaving me with a 09.15 departure time. I refuelled the Jimny (that has to be the most rewarding part of driving it) and headed east to the bustling metropolis of Cedarville. This is one of those "if you blink you'll miss it" villages with it's own unique character.

I left the tar to film a small pass called Wepenersnek, then doubled back to the R56 tar road and took the next gravel road south. This is a magnificent drive on a surprisingly good gravel road. Next up was the Nungi Pass which was a visual feast of rolling grassy hills set to a backdrop of big mountains, dotted here and there with a few rondavels. This pass is a photographers delight.

Next up was the Colananek Pass which was troublesome in the extreme - not in terms of road condition, but there were techno gremlins about. Poor bluetooth connectivity between phone and GoPro, meant I had to traverse the pass up and down six times, until I eventually had the footage I wanted. The two Xhosa ladies sitting at the apex of one of the hairpin bends waiting for a taxi must have thought I was daft!

The scenery throughout this long gravel section between the two major tarred roads (R56 & N2) is mesmerising in its scope and tranquility. Sooner or later I needed to find a point to cross the Umzimvubu River in order to avoid having to drive through Mount Frere. The single width low level bridge seemed in good shape and other than a small herd of sheep which decided to cross the bridge at the same time, all went smoothly. The river was flowing strongly and as always it is a typical silt laden Transkei river moving millions of tons of fertile topspoil to the Indian Ocean at Port St Johns.

A short stint on the N2 was followed by a pleasant drive on a secondary tarred road to another small (and chaotic) town called Tabankulu. A black pot bellied pig (sow) with 8 tiny piglets dodged their way between the shebeens and spaza shops with even the taxi drivers allowing them safe passage. (More lower down)

Once through Tabankulu my next goal was to film the Gwangxu Pass. This magnificent gravel pass leads more or less to nowhere other than some very remote villages. With the road quality becoming increasingly rough as progress is made down the Umzimvubu River valley that slight feeling of angst embraces the driver heading off into a place you don't belong and have never been to before. The views are jaw dropping in their grandeur and I had run through two Go Pro batteries as I worked my way gingerly towards the bottom of the pass. The descent alone is about 12 km, so it takes a long time driving at approximately 20 kph.

By this stage I had become quite proficient at figuring out animal behaviour. In general terms cattle (mostly Nguni) are completely placid and will not move off the road until you are within a few centimetres of them. Cow dung covers about 50% of the road and when you get back to the city, the car wash guys are going to hate you! Sheep and goats are lower in numbers and are also placid, only giving way when you are a few metres away. Pigs are peaceful and not bothered much with cars, but it is the dogs which come off worst. I have never before seen so many dead dogs on the roads as in this part of the world. 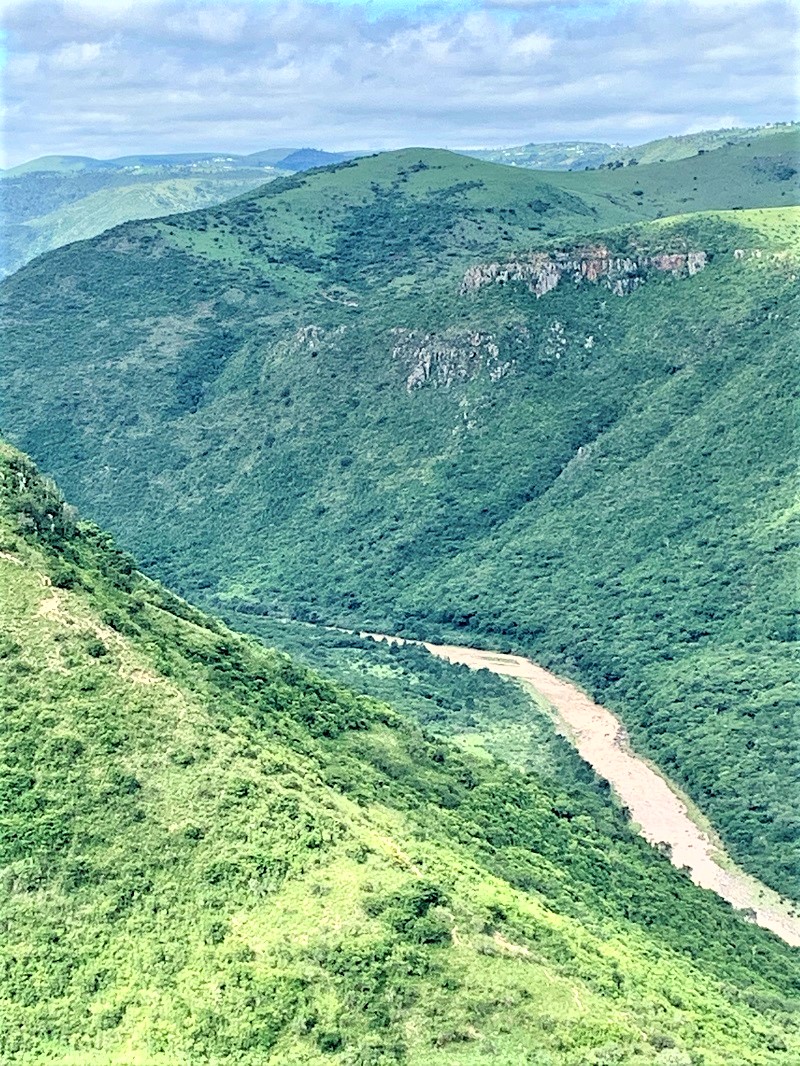 Right near the bottom with about 1 km to go, I found the road barricaded with large rocks and after a brief discussion in very basic Xhosa with two young men sitting in the shade of a tree, I gathered that the road had been closed for a long time. Either the road itself is not passable or the bridge is damaged. So there ended one of the passes I was looking forward to the most in terms of filming. I gave one of the two chaps a lift back to Tabankulu. I think he was terrified as I gave the Jimny a good run back up the pass. He never said a word other than "Nkosi tata" when I dropped him off.

Just before Tabankulu I hooked a right and connected with the biggest pass of the day - the Mzintlava Pass. This has to be my favourite pass is South Africa. It has a lot of variety ranging from dense indigenous forests, to open grasslands, steeply incised valleys, wildlife, fantastic birding opportunities and of course that big, brown river with it's mythical story of a river monster that reputedly killed and ate 8 local villagers. (That whole story can be read on our website entry for this pass). It's also a very long pass at 37 km and delivers one onto the R61 route north of Lusikisiki.

When I was a youngster, Lusikisiki was a tiny village of perhaps two streets. Today it is a sprawling town of some significance covering a big area. Be prepared for some of the worst speed bumps in South Africa. You will also need lots of patience as the hustle and bustle of the town takes one a good 30 minutes to traverse - and like most of the towns in this area, it is chaotic.

Time was running out in terms of filming, so the four back to back passes with their 500 plus bends leading down to Port St Johns had to go onto the back burner for the day. Once again the scenery is lovely, but be warned about all the speed bumps. Here you will find those bizarre speed bumps consisting of 5 short, sharp bumps set approximately 1 metre apart. There are about 8 of those sets along that stretch of road and it causes a lot of congestion. The Jimny handled those bumps better than any other vehicle - probably due to the short wheel base. The R61 is in good nick and lovely to drive on.

I arrived at the Port St Johns River Lodge at about 5 pm after a long, dusty but hugely satisfying day. After a dip in the pool (the river is out of bounds) the task of downloading footage began - hours of RAW footage - to clear the GoPro for the next day, helped along with an ice cold beer.

Podcast: A chat about the Wild Coast recce trip (Part 2). Click to listen.

The R396 is a long and winding gravel road offering some wonderful passes for the adventurous traveller. One of the lesser known passes is our featured pass this week. Take the link and enjoy the cyber drive.

Words of Wisdom: "Don't downgrade your dream to fit your reality. Upgrade your conviction to match your destiny"