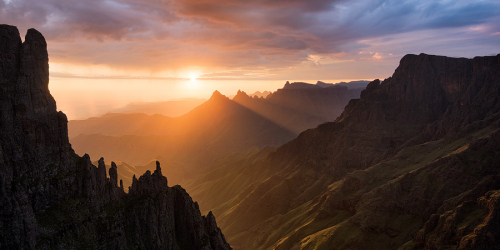 * Part 3 of the Transkei recce

This well-known magazine have invited us to become a regular monthly contributor. We have just finished the first instalment which will appear in their next issue. Grab yourselves a copy and enjoy the passes in print.

By the time you read this newsletter out guests will be gathering in Joubertina on the R62 (Langkloof) on the eve of our departure on yet another adventure. We are heading into a wilderness area where there is no mobile reception whatsoever, but we will take photos and videos and relay them back to our HQ for publishing on Facebook and Instagram where you will be able to follow our progress and enjoy some of the highlights.

We have had a cancellation which means we have 1 ticket open for anyone owning a 4x4 with low range who wants to add their name to the Hall of Fame. We'll take you there and get you back safely. You need a minimum of two years offroad driving experience to do this tour. Read more about the Ben 10 Eco Challenge V3 Tour.

This tour remains fully booked and appears to be an outright winner and one we will repeat again fairly soon based on the speed at which bookings came in and general demand. One of the innovations we have included in this tour is the inclusion of local specialist guides. One in the Matatiele area, another in the Mbotyi area, another at Hole in the Wall and a fourth at Mveso and the vulture colonies at Collywobbles.

The mosquitoes at Port St Johns are large and hungry (or is it thirsty). Note to self - take Tabard with on the next trip. They don't whine like normal mosquitoes. They sound more like a drone. They land and bite in one smooth motion being quite happy to die on the job, as their next of kin arrive en masse to take up on the banquet. But if you set your aircon down to 16C they seem to keep away.

It was a beautiful morning with not a cloud in the sky and that particular tone of blue one only gets on the Wild Coast. Johan Thiart of HHO engineers (who works a lot in this area) offered to guide me up to the old airport on top of the mountain. I filmed the entire pass with one or two sections of the sinuous road being directly into the morning sun. The runway of about 1.5 km is not in bad condition and by Eastern Cape standards has more cow-pats than potholes, so a good pilot could still easily land a small aircraft there - although an approach from the north over the Mzimvubu gorge must be quite hair raising!
(More lower down...)

Port St Johns village is, to all intents and purposes, trashed. It has very little tourist appeal, but that doesn't mean that all the attractions (like Second Beach and Eagles Nest) can't be fully enjoyed as long as you are booked into one of the river lodges you can really enjoy the area in comfort and safety.

After descending the mountain down the winding concrete road, it was time to refuel the Jimny (all R280 of it) and head back to Lusikisiki as I needed to do a recce of Mbotyi. I'm a bugger for punishment as I missed the turnoff to Mbotyi and ended up driving all the way to the start of the Mzintlava Pass, before figuring that one out. That meant a U turn and those 64 speed bumps suddenly became 128 as I had to retrace my route all the way back through Lusikisiki. Painful! 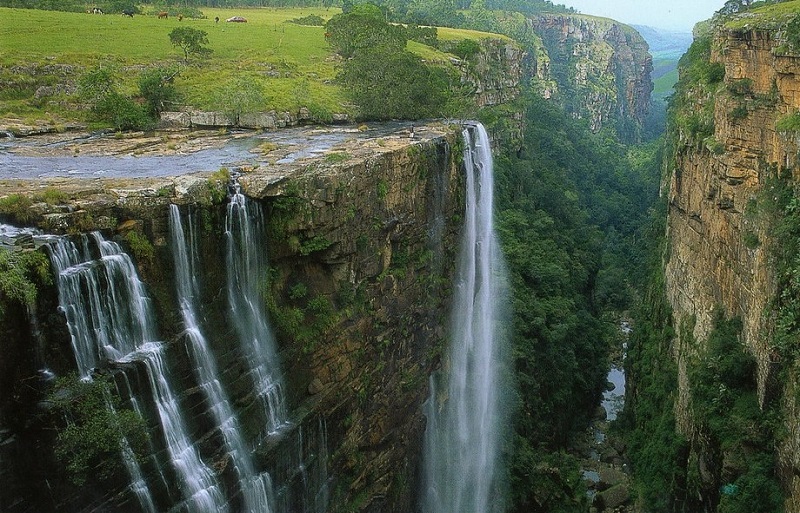 The road to Mbotyi starts off through some outlying suburbs (a potholed tar road) which mercifully becomes gravel after 4 km. I was no sooner on the gravel, when I discovered yet another type of speedbump. This is the gravel road speed bump. It's short, steep and nasty and is perfectly camouflaged to the extent that drivers only see it when about 10m away. Only the first one caught me. I'm a fast learner.

The road down to Mbotyi is an interesting one. At present there is a lot of construction going on in the area by Concor, who are busy with the two massive new bridges for the N2 toll road. The Mbotyi road is being used as an access road to the construction area and at the same time the road itself (well known for being rough) is being upgraded. The gravel road normally permits the passing of a vehicle from the other direction with little space to spare. Gravel heaps now occupy one half of the road which means there is only space for one vehicle. So if you come across a 20 ton construction truck, a front end loader or a road grader, you most definitely have a problem. Fortunately the Jimny is so small that I could squeeze between the gravel heaps and allow the bigger vehicles to pass.

This road also bisects the Magwa tea plantation – a sprawling farm with hundreds of thousands of healthy tea bushes. The project is a joint venture between government and private enterprise in an effort to create employment in the area. Many workers with baskets could be seen harvesting the tea.

The road is more or less straight for a long time, until the lip of the final coastal escarpment is reached. From this point down to the estuary the road plummets down the mountain in a dizzying series of sharp bends with very steep gradients. This section of the road is a proper mountain pass and it's as well that the surface has been concreted as a drive down (or up) there in the rainy season would be impossible without 4WD.

The pass is actually quite beautiful and immersed within the forest canopy for most of its length – very much reminiscent of Kom se Pad near Knysna. Suddenly the dappled gloom of the forest gives way to sunshine and the river estuary pops into view on the right with the ocean to the left.

I stopped in at the Mbotyi River Lodge to have a look around and very quickly decided it was a worthwhile venue to include in our Wild Coast Tour. I also chatted to a Xhosa man named Simphiwe, who has intimate knowledge of the area and arranged for him to guide us to the famous Waterfall Bluff, but from the northern side, which involves a 5 km walk versus a 28 km walk from the lodge.

Armed with an armful of brochures and information I set off to find the Magwa Falls. It is such a beautiful waterfall and yet there are hardly any signboards to guide you. Even with a fancy GPS it was still necessary for me to stop twice and ask locals for directions. The drive down to the falls is actually a lovely experience under tall trees with much of it lined with tea plantations on either side.

After about 5 km the road comes to an end at a small circle. There being no signage, one assumes this is where the waterfall is. The edge of the gorge is about 30 m from the roadway. The surface is long grass and if its wet or misty (which it often is) you need to be extremely careful not to slip as there is nothing to stop your slide over the precipice, which will end at the base of a 150m vertical cliff. One unlucky motorist decided to drive his car too close to the edge and him and his car plunged to the bottom of the gorge. The wreck is still there.

I could hear the falls but I couldn’t see them. I took a few photos and was trying to locate a better viewpoint, when out of the landscape emerged three young Xhosa boys. I was the only person there. The weather was very hot and the boys seemed exceptionally nervous - probably too eager to impress me.

English made no sense to them, but they could say “Magwa Falls” and “I show you” and so the youngest one (14) remained behind to guard the car, whilst I was shepherded by the two older boys towards a point which appeared to be moving away from the falls.

These kids were nimble and agile and were soon ranging well ahead of me as I tried to keep up. Then came the crossing of the river itself. They assured me that the best view was from the far side. They scooted across the rocks between the rapids and in my mind's eye I could see myself taking a heavy fall and injuring myself, so instead I sacrificed my sandals to the river gods and simply waded across.

Then came some scrambling over a few sand banks and big boulders. The boys, dressed in long pants and school uniforms, were sweating, but I was too. They both turned around together, and gave me a big warm African smile, and pointed to the left and there it was appearing before me like a magical stage show – the Magwa Falls, looking simply fabulous.

Like a smaller version of Vic Falls, Magwa also has a deep gorge which slices through the mountain, creating a straight vertical drop down to the rocky pool below. The falls have three sections and if the water levels are good, all three cascades will be visible, forming a rainbow about ¾ way down (depending on the time of day). The lush green vegetation, blue skies, rainbow and rushing water all add to make a trip to this waterfall very worthwhile. I immediately added it to the tour itinerary.

I gave the youngsters some advice about guiding and suggested that they should decide on a fee so that visitors can have the option of using their services or not. I told them to expect me in May with a big group. More big smiles.

Next week we will drive the four passes back to Port St Johns and pay a visit to Execution Rock and explore some of the myths and fables.

We head up the Free State this week to visit a pass not many people about. It's located near the town of Marquard and if you ever visit this area read on and watch the video to catch up on some of the interesting history. Written and filmed by Mike Leicester.

Words of Wisdom: "Optimism is the faith that leads to achievement"