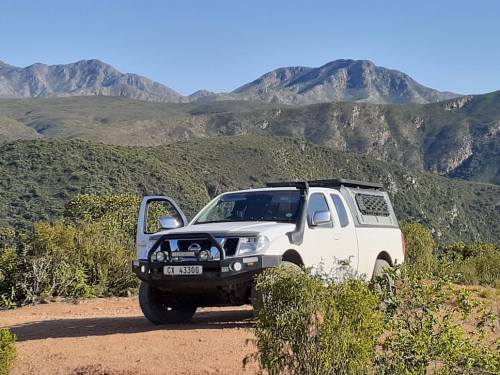 * Corona - you cannot ignore it

What a week! The Corona story happened whilst we were on tour in the Baviaanskloof being totally isolated from the outside world with no mobile signal or internet connection whatsoever. It was only on the Sunday evening as we arrived at Bruintjieskraal near Patensie, that the lodge owner informed us of the bad news. Two of our guests on the tour run an international travel business and had to reluctantly leave the group a day early and head directly back to Johannesburg to deal with the detritus of cancellations and postponements.

We arrved back in Cape Town on Tuesday evening and then the harsh reality of what was happening struck me like a sledge hammer. For the next four days, it was like coming out of boot camp. I had to read so much negative material to keep myself informed - and try and sift the fake news from the real news. It left me feeling flat. But the show must go on and it is so important to keep a positive mindset. Reboot. Reboot. Reboot.

On Monday night the lockdown announcement was made, which in turn resulted in us having to postpone our Ben 10 V3 Tour which would have fallen within those dates. This morning I read an interesting and uplifting article written by a British teacher in the Far East, who has just come out of isolation and their lives are returning to normal again. It is important for us to understand what we are dealing with and that in time, our lives will also return to normal.

In the meantime, set yourself up for success over the next 3 weeks:

1. Plan your days to be productive. Do all those repairs, chores you have been putting off. Clean the garage. Paint that room. Do a gardening project.

2. Get us much quality sleep as you can and some daily Vitamin D sunshine.

3. Stay off the alcohol.

4. Sort our all your photo files. Create new albums. Play games like Monopoly and Scrabble.

5. Spend time with your kids. Set aside daily hours for online education.

6. Stay away from the negativity of the news channels where possible - and especially fake news sources.

9. Keep yourself busy. Don't panic buy, or hoard. Don't worry all the time.

10. If you are worried about your financial commitments, get hold of the company concerned and make arrangements for 3 months deferred payments.

We will announce new dates for the Ben 10 Tour as soon as is practical. The Wild Coast Tour has not been postponed at this stage, but we will keep an eye on matters and keep you in the loop as things unfold.

Please remember that many small businesses are taking financial strain at the moment and especially hotels, restaurants, guest houses, B&B's and anyone in the tourism industry will be taking a hiding. Once this pandemic is under control, we urge you to support a small business in any way you can. The large companies have enough financial muscle to see this through, but the family run companies will need YOUR support.

I left Coffee Bay around midday and took the tar road back to the N2, hooked a left and headed towards Idutywa, where I skipped the centre of town traffic jams, past some rickety old buildings and back yards and hopped the little Jimny over an open field or two (dodging goats, dogs and chickens) to connect with the R408 to Willowvale and ultimately to Kob Inn (that was the plan anyway.)

After Willowvale my GPS guided me off the main road onto a very minor track. Not knowing the area well, I dutifully complied. Conditions worsened rapidly and I found myself driving along the upper edge of a deep gorge. I later established that it was the Qora River gorge. The distance to go to Kob Inn and the ETA were looking great for an early arrival, but when the distance dropped to 5 km and I couldnt see the ocean from my lofty road, I knew things were going wrong.

Eventually I arrived at the waypoint noted on T4A as Kob Inn and there was nothing there except hills and cattle. (I have subsequently reported the error to Tracks4Africa). Suddenly I realized that I was going to be running out of daylight, so I reset the waypoint to Mazeppa Bay where I know there is an hotel which was closer to where I was. I arrived just before sunset and booked into one of the sea view rooms. The hotel is old (like most of the Wild Coast hotels) but it has a commanding position right above a beautiful beach. Most of the hotel and annexes are under thatch which creates a charming atmosphere. It was February 14th (Valentines Day) and I was one of only four guests. Needless to say it was a quiet night.

The next morning it was a question of heading to Trennerys, as I was running out of time. I took the road to a village named Kentani. By now I was becoming attuned to the towns and villages and got into the habit of skirting around the side streets to avoid the congestion along the main roads. Along the way I filmed a smallish pass which was in a terrible state. I counted at least 3 vehicles broken down - all of them with suspension problems. I arrived at Trennerys in good time, where the owner took me for a walk around and offered plenty of information. It became obvious that this would be the final night of the proposed tour ending on a Saturday to participate in the Trennerys famous seafood extravaganza.

Next week we will report on the short leg from Trennerys to Morgans Bay - a shortish distance which took a very long time to complete due to pilot error and some unplanned Grade 4 off-roading!

Our dinner times in Joubertina were dictated by load shedding. Six in the evening is a bit early but all the guests were famished after a big day in the mountains. Our hosts laid on a braai par excellance for us and I have to admit, those country folk really know how to cook meat. It was superb.

The next morning dawned bright and sunny. We got the team going at 8 am sharp as the Saturday would be a long day. We drove east along the R62 for about 35 km to arrive at Kareedouw - a small town where the main activity is the manufacture of fine furniture and the general timber trade. It is here where the Rensilfier company produces some of the finest hardwood furniture - some of which still grace my home 45 years on.

This was also the final refuelling point for the next two days. We then headed north and later west to cross the Krommerivier and ascend the Suuranysberg Pass, which is an easy pass with reasonable gradients and marvellous views to the south. Our two novice drivers were gaining rapidly in confidence and enjoying themselves to the full. 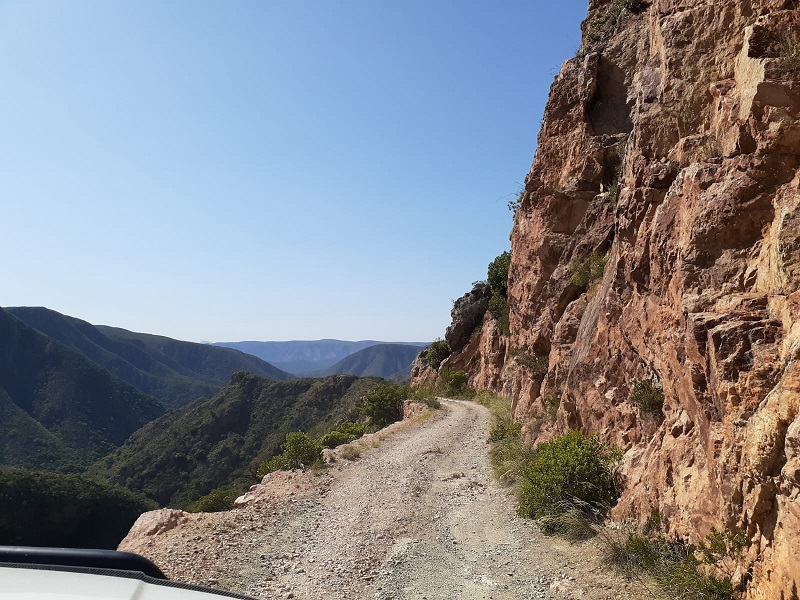 Gorgeous scenery and technical driving on the Kouga Tour

Once over the summit we began the descent of the Kouga River Pass. This fairly short pass is narrow and packed with curves, stunning scenery and of course, the opportunity for a swim at the river crossing in the middle of the pass. This would be our third and final crossing of the Kouga River.

Once over the northern ascent, the road forks. The right hand hand option heads down to Moordenaarskloof with its spooky stories and ghoulish history. You can read up on that one via the link provided, but our route followed the left hand option up Meidenek. Even though there are no official passes along this long stretch of gravel road, the reality is that the traverse consists of six small passes all linked together by a series of short plateaux. Just this stretch alone would be enough to thrill even the most experienced traveller.

Our first goal for the day was a tea-stop at the very remote Baviaans Lodge run by Rob le Roux - an unpretentious man with a vast knowledge of the area. Our timing was perfect for 11h00 and Rob laid on much more than just tea - it was a more like a banquet! An hour later, we headed back up the steep little pass from the lodge to connect with the actual 4x4 route.

Next week: Chapter 3 which will cover the Baviaans-Kouga 4x4 Route.

Note: This podcast was recorded before the national lockdown was announced. The Ben 10 Tour was subsequently postponed to a later date.

In keeping with our theme in the southern Cape, we take you along one of the passes we drove on this tour. It's a long pass with a wonderful variety of scenery and driving conditions. Sit back, relax and enjoy the 3 part video set we have only just completed yesterday.