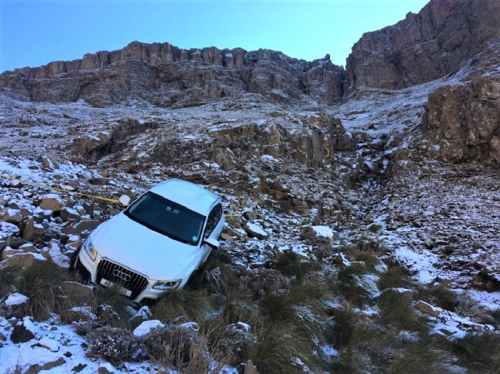 An Audi AWD on the Sani Pass - Photo: Herald Live

A timely lunch break next to a Cape Nature cottage high up on the plateau during a break in the rain also allowed for a good leg stretch and time to smell the proteas and ericas (no daisies around!). Once the convoy got moving the last few kilometres leading up to the Antoniesberg Pass, saw the track deteriorating markedly, with some serious dongas and washaways that required some careful driving, but everyone managed the driving, including our two novice drivers.

The pull for the morning only covered a distance of 16 km but it felt more like 60 km due to the very slow average speed of around 20/25 kph. A small warning sign announces 'Mountain Pass" not befitting the spectacular drive you are about to experience. The road throughout remains single width, but just at the start of the pass the 2 spoor tracks changes to a proper road. I use the word 'proper' only in the sense that it doesn't have the standard 'middel-mannetjie' associated with a jeep track.

The road kinks to the right and enters a deeply wooded section with a hint through the foliage that there is a huge drop on the right. As suddenly you are back out of the tree line, a jaw-dropping view will stop you in your tracks. There is nowhere to park, but as you will more than likely be the only vehicles on the road, just stop, pull up your handbrake and switch off your engine.

Directly to the right the road falls away almost vertically with a vertical drop of about 200m. Far below a glstening string of rock pools and greenery show the course of the Grootrivier, which has a massive drainage area covering a large part of the Karoo interior. Green hills tumble down into the gorge as one's gaze shifts progressively from east to west, picking out cattle paths, minor tracks and a farm house at the bottom of the valley. The ascent of the pass can also be seen from here, snaking its way steeply up the western side of the poort.

The descent is slow and bumpy with lots of large loose stones and it is here that motorcyclists get themselves into all sorts of trouble and where many a rider has suffered injuries to body and pride. The road winds its way laboriously down towards the lowest point of 231m above sea level.

Just before the last sharp right hand bend is reached, a sign reads 'GROOTRIVIERPOORT'. This sign is technically correct as it is the Grootrivierpoort and is the same river and poort that we traversed the day before in the Baviaanskloof proper, except this part of the poort is just a bit further north (in fact just 15 km north as the crow flies). The problem with this sign as that it has caused much confusion with adventure travellers and cartographers in that one cannot have two passes (or poorts) of exactly the same name in such close proximity. It can and has caused confusion and a number have people have got lost in these parts because of this. The name of the pass is Antoniesberg Pass and not Grootrivierpoort. 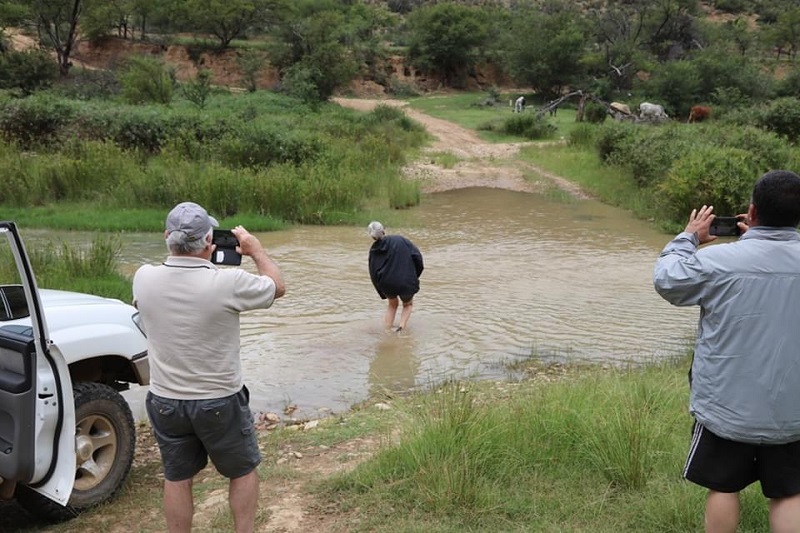 In the lead up to the bridgeless crossing of the river at the bottom of the pass, I had been teasing the novice drivers about the depth of the crossing, but not to be outdone, one of our lady guests (Michelle) was up to the task of walking the crossing in the interests of the safety of the group (all tongue in cheek of course). The water level was about calf deep, but Michelle waddled in, dropping onto her knees in a weak disguise of showing the water level to be chest deep. What a hilarious moment and excellent entertainment. She was of course sopping wet after that little episode and must have been most uncomfortable for the rest of the drive. Every tour is different and so are the people.This group was wonderful.

The ascent up the western side of the poort is very steep, but no-one experienced any traction issues as more fabulous views were enjoyed of the impressive poort slicing its way through the mountains to the right. The road levels off on the far side and from this point the gravel road is a much better condition, allowing us to pick up our speed to 60 kph. This road has recently been upgraded to service the new water pipeline.

The Karoo is such a special place, regardless of whether it is the flat open spaces, the steep mountains or the deep kloofs. But perhaps it is the towns that really add the magical essence that makes the Karoo what it is. What is a town without people?

The townsfolk of Steytlerville are a special bunch. This unique Karoo town was planned to be the final overnight stop of our tour and what a great choice that turned out to be. The hospitality was excellent, the rooms clean and comfortable and then there is that pub in the Royal Hotel which oozes character. Heraldics are the big thing in the town with neat coat of arms signs adorning the street lamps down the wide main road - so wide to allow a full span of oxen to make a U turn.

Soon a stately and immaculate Austin Van den Plas arrived, driven by the owners of the Karoo Arts Hotel just outside of town who came in to the Royal Hotel for a sundowner. All dressed up, stylish and neat as a pin.

This final night was a defining moment for us at MPSA and for every person in South Africa, as from this point on, the Corona pandemic would be foremost in our thoughts for a very long time. The beginning of the lockdown and the end of our tours for a while. A time to revaluate our lives and the road ahead.

PASS OF THE WEEK - In September last year whilst on tour, we were able to refilm the iconic Sani Pass in near perfect weather. This is our most popular individual pass page having amassed 116,000 views since we published it. Our new 7 part video series and a completely revamped and upgraded page should see page views increasing dramatically in the months ahead. Be the first to enjoy the new videos on the link below:

Wepenersnek - a short, steep pass on a very quiet back road close to the sleepy village of Cedarville in the Eastern Cape.

Words of Wisdom: "A person who never made a mistake, never tried anything new" ~ Albert Einstein