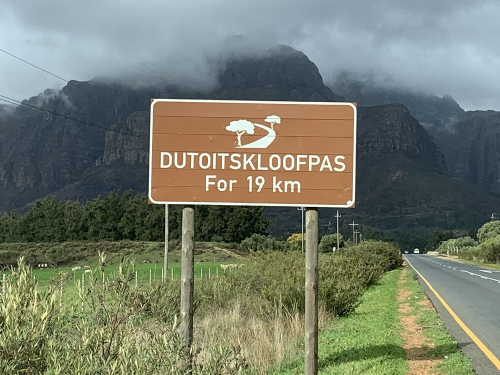 * Signs of the times

* The importance of social media in brand building

* Trips & Tours and the Covid spoke in the wheel

* Reflections  - The day of the turkey

Signs of the times

Our cover photo shows one of the 162 official road signs which now fall under the auspices of Mountain Passes South Africa. The first recce trip has already taken place where dimensions were recorded for the reinstatement of any damaged signs, removal of graffiti and repairs of the inevitable bullet holes so common in South Africa. The project will commence as early as next week as we take charge of this project and with a long term vision, we could possibly even cover the whole of South Africa. Next time you arrive at one of those tourist board signs, you will see our name on them (with pride). Please don't shoot the signs guys - SLM (Sign Lives Matter!)

The Western Cape got slammed by another potent cold front with wind speeds exceeding 80 kph and wave heights that reached 9m. Uprooted trees, localised flooding and property damage were all sacrifices that had to be made to record a 4% increase in dam levels in the province. Snowfalls were recorded right across the high mountains of South Africa and Lesotho. The Swartberg range was pummelled by this storm resulting in the temporary closure of the Swartberg Pass, but traffic is flowing again as road repair crews are hard at work sorting the road out.

Our social media pages keep us very busy. We have just whizzed through the 32,000 followers mark. Since lockdown started, we seem to have found a new popularity amongst the public, who seek out uplifting, positive posts. We don't pay for these posts. The growth is entirely organic. To put this into perspective, we will typically post between 4 to 8 times per day or approximately every 2 hours. Each photo or video we post has to be checked for authenticity, quality and suitability for our audience.

After a post has been published, it has to be constantly moderated for spam attacks, politically motivated comments or troll type comments. Our total time spent on Facebook (excluding Instagram) can easily reach up to 5 hours per day. A typical day's post views will be around 50,000. So in a month that figure will reach 1,5 million views. Over a year that translates to 18 million.  These social media pages are the feeder system driving traffic to our website - so now you know why we put so much effort into it. The viewing public know what they want to see and clearly we are meeting those needs based on our current growth rate of 1000 new followers every week.

For start-up business that think they can launch a Facebook presence on a budget, be warned that once you are in the loop of spending money on promoted paid posts, it will very quickly fall flat if you don't carry on spending. Organic growth is the way to go. Trust me on this.

Planning tours in these uncertain times has proven to be very difficult. Part of the problem comes in the interpretation of the lockdown regulations. On any one regulation there can be as many as five different interpretations, with each one claiming to be the "official" one. In essence, it means any tours planned after August 1st when we presume inter-provincial travel will be allowed, must have a plan B in terms of alternative dates. Having to have a double set of dates, essentially means we can't plan tours for the second set of dates, so effectively our tours frequency is reduced by 50%.

With our Wild Coast Tour looming in early August, we are waiting with bated breath for news of the relaxation of inter-provincial travel. This tour remains fully booked. All of the guests that booked and cancelled because of Covid 19 fears will receive 100% credit.

The Ben 10 Tour, which is scheduled for mid-September still has one ticket open. The Ben 10 Tours are always enjoyable providing a heady mix of challenging driving, beautiful scenery and camaraderie. Full information and bookings can be done online on this link. BEN 10 V3 TOUR.

The year of the Turkey.

A lot of things went down in that illustrious year in the dusty streets of the hot Karoo dorpie when I was 4 years old. My aunt, Elaine Watson, had given her brother (my father) a turkey to fatten up for our Christmas dinner. My father had very basic carpentry skills, but he managed to fashion a small structure against the side of the house, with a rickety chicken mesh wire door with a wooden toggle as a lock. Inside lived a very ugly and scary bird, considerably bigger than what I was at the time.

Needless to say, we kids were fascinated with the turkey and I recall spending a lot of time staring at the monster, becoming braver each week. Over time, the turkey and I became soul mates as I had my daily chat with him as he gobbled down his ration of mealies.

I’m not sure how it happened. Perhaps I felt sorry for my new friend being locked up in a small cage all day? Perhaps I was just being mischievous? I decided to set the turkey free - but just inside our yard which was fenced off. The plan was to herd him back into his cage before dad returned from the office. The turkey had far grander ideas and once free, took a quick jump over the motor gate and set off down the main road at a brisk trot. 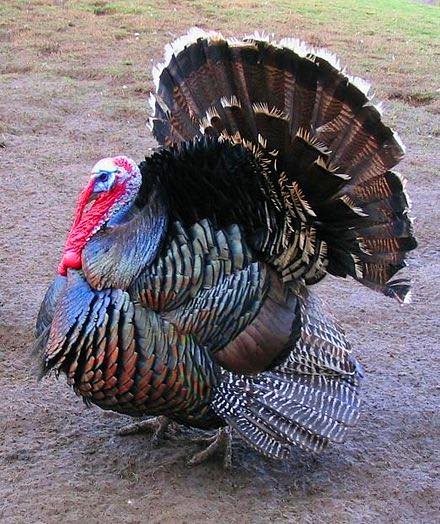 The Turkey that escaped

I knew I was in deeper trouble than I could manage, so sensibly rallied the troops - being in the form of my brother and sister. The chase was of epic proportions that would make a car chase from the Fast & Furious look tame  In and out of other people’s yards, dust flying, shrieks of terror on the occasions we did manage to corner it. I can remember how out of breath and anxious I was. That turkey was taller than I was and when it spread its feathers it took on menacing proportions.

Talking nicely to the turkey didn’t work either. I tried persuading him to be a good boy and walk back to the house with me, but such logic fell on deaf ears. This was The Great Escape and I reckon he knew he was destined for the pot. The big worry was having to explain to my father why I had set the turkey free. My memory of the event is faded from this point, but I seem to recall that the turkey was eventually located and returned to its little cage, but not by any of us kids.

Did it make it into the oven for Christmas dinner? No doubt about that. My relationship with the turkey changed abruptly from ‘best friend’ to ‘you’re going to be slaughtered’ as I surely got a hiding for being kind to animals.

Africa's not for sissies.

Podcast:  This week we cover Part 3 of Michell's Pass near Ceres and its important role in the economic developement of the region.

This week he head down to KZN to cyber-drive a gravel pass which opens up a whole chapter of history.

“Noustrop” literally translates into English as “narrow strap”, but the term is most often used colloquially in Afrikaans as a word meaning “to struggle”. This is not surprising, as this difficult pass must have presented a formidable obstacle to the Voortrekkers when they first arrived here, similar to the nearby Helpmekaar Pass (“Help Each Other Pass”).

The signs which bookend this pass on either end spell the name as “Knostrope Pass”, which is also the name of a farm in the vicinity. The gravelled road is in a fairly good condition, but there are sections which could present a problem in wet weather. It is located close to the Anglo-Zulu War battlefields of Rorke’s Drift, Fugitive’s Drift and Isandlwana.

Words of Widsom: "When I stand before God at the end of my life, I would hope that I would not have a single bit of talent left and could say, I used everything you gave me" ~ Erma Bombeck