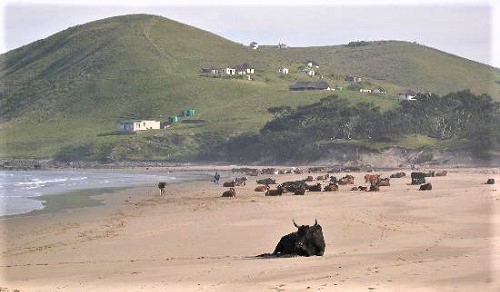 The news spotlight this week is shared between the announcement of Level 2, the return of load shedding and one of the coldest anti cyclones in many decades that has seen the mercury dropping well into double digit below freezing figures at several locations on the high ground all over South Africa. Major snowfalls have occured in the Eastern Cape over the last few days with snowy pictures streaming into our inbox of the Swartberg Pass, the Langkloof, Uniondale and Prince Alfred's Pass.

The bad weather will pass quickly, but at last the hospitality and tourism sector can breathe a sigh of relief. Those businesses that have survived the last 5 months, can start gearing up for what we predict will be a boom in local tourism. We base this opinion on the major increase in inquiries we've had for our tours and at least two clients who had planned overseas trips in the second half of 2020, have booked on our tours. In a bizarre way, Covid 19 might just have awoken the sleeping giant of local tourism.

We have just 2 places open for our 4x4 training introductory tour on September 13th at Wolvenberg near Worcester. If you're new to off-roading this is the perfect day tour to sharpen up on basic off-road skills and gain confidence in your own abilities and know your veheicle's abilities and limitations.

All our other tours remain fully booked. We do run a 'waiting list book' for cancellations. Just pop us an email to This email address is being protected from spambots. You need JavaScript enabled to view it.

For 2021 we will be scheduling tours to Lesotho/Sani Pass, Namaqualand/Richtersveld, Baviaanskloof, Swartberg, Garden Route, Bedrogfontein and Wild Coast.

If you want to be the first to hear about new tours, subscribe to our Tours Newsletter.

Rietfontein is one of the almost perfectly preserved fortified farms left in the Eastern Cape. The farm lies almost as it was the day the building was completed. Additions have been made to the original "I" shape (please refer to drawing lower down). In 1944 the open "Inside Stone Quad" was covered to serve as a living room. Part of the stone walls enclosing the homestead are missing, but the foundations are still clearly visible.
[Read more]

These were all eight feet high, with shooting apertures. In 1906 JN Malan snr. spent 500 Pounds to rebuild fallen down portions and "point" all the stone joints with cement. This was money well spent, making sure that Rietfontein's historic buildings would be preserved, the cement pointing preventing the mud used as mortar form washing out further from between the layers of stone. 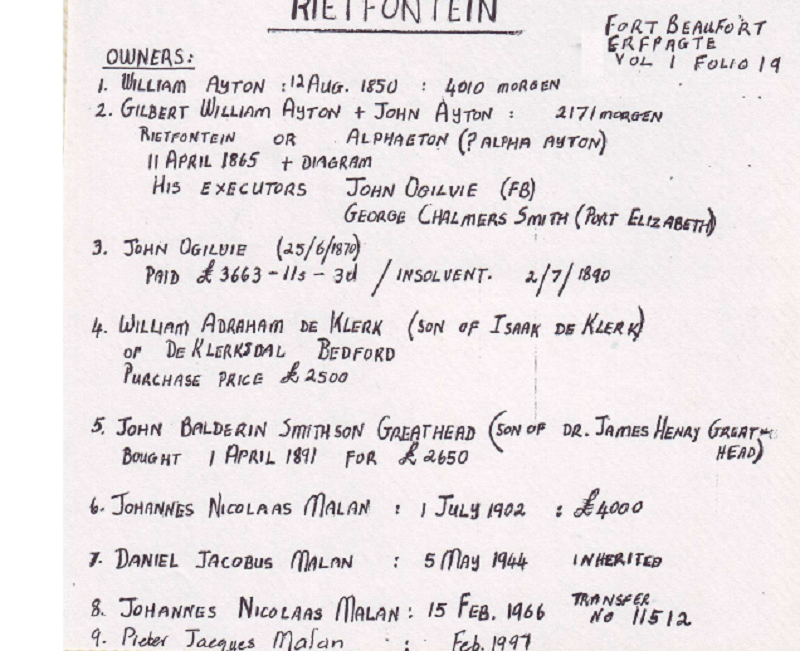 The farm is situated on the clear piece of land in the area, surrounded on all sides by hills and bush. This makes it an ideal place for defence.

The original house was in the traditional "I" shape. With the necessary loopholes and fortified windows, it is obvious the original inmates realised that they lived in dangerous country. These loopholes are still to be seen, as originally constructed, inside and outside in the main bedroom. The front part of the house shows other exterior loopholes, which were opened up in 1974, when some restoration work was done.

According to Capt. Peter Campbells book "Reminiscences of the Frontier Wars", there were approximately 100 troops stationed at Rietfontein. No private owner could have possibly built the extensive outer buildings, or needed all that accommodation. The stables could have housed 40 horses or more.

On August 4th 1835, Mr Muller, from "Rietfontein farm", advertised in the Grahamstown Journal, that ...no traveller may outspan, as oxen would be sent to pound. No other than public road allowed. 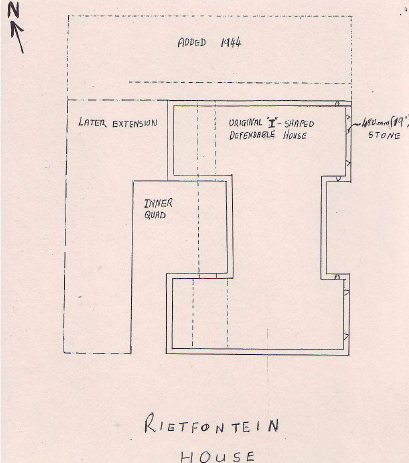 At Rietfontein, near Mildenhalls place, the home of William Ayton, William Curry was murdered on October 8th 1846.

Last Thursday some men went out to escort George Gilbert in, taking with them three Englishmen who had been engaged to go out to Ayton's to help them defend the place.

They had managed to save three horses, and one of these they left and followed the escort over to Ayton's (about four miles over a long, and in some places, steep ridge, encumbered with thick clumps of bushes). They did not save even a change of clothes. The Aytons followed the same plan. Mrs Ayton packed a few clothes and plates in a box, and then left the place. Their Hottentots had all previously deserted them. They went round by G Gilbert at Nelshoek (Stoneyfields), and joined by his family in the same plight. Nobody could help - weeping to see them come into Fort Beaufort. They had two wagons - one wagon was Ayton's stone truck, full of bedding - some of which was trailing on the ground; and the other full of children, with the women on horseback. It was a dreadfully hot day. Mr Ayton and G Gilbert brought their sheep with them, but a great many dropped on the road. Ayton started with 200 little kids, but only got 20 into Fort Beaufort.

More next week. Our thanks to Danie Malan for sending this very personal snippet of history to us and to Roy Dromgoole for the editing and transcriptions. We have edited some of the words which appear in italics, which were used in normal conversation in the 1800's but today are unacceptable.

Podcast: We chat about the historic Montagu Pass and its predecessor - the Cradock Kloof Pass - near George.

Our featured pass this week takes us deep into the heartland of the Wild Coast and the tiny coastal settlement of Mbotyi where a very steep pass winds its way down to the coast from the escarpment where the largest tea plantation in the southern hemisphere provides access to a series of impressive waterfalls, which include the Magwa Falls and Bluff Waterfall. We filmed this pass just before lockdown in February 2020.

Words of wisdom: "Sometimes we are tested not to show our weaknesses, but to discover our strengths"  - Anonymous