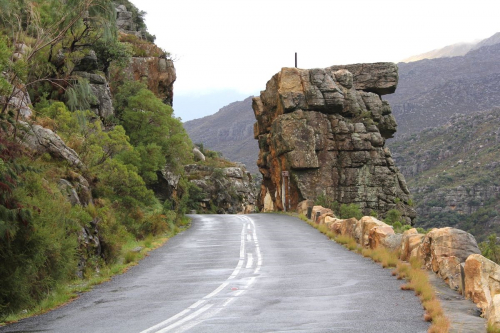 The blossoms have started. The wildflowers are amazing (best in a decade); lots of snow has fallen and a cold and wet winter is finally giving way to the joy of spring. This was also the most bizarre winter of all our lives, being mostly under lockdown.

There is a new energy about. One can almost feel it. Slowly but surely people are returning to normal and we predict that the next year will see a boom in local tourism. South African's are hungry to travel. Those that normally travel overseas are looking for local tours as an alternative. The tidal wave of pent up tourism has begun. 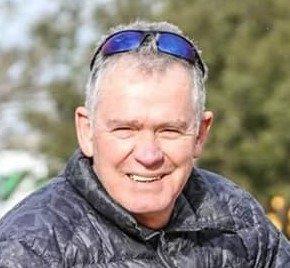 Johan BadenhorstWe are proud to announce our first formal joint venture tour operator. Johan Badenhorst of Platteland Tours will be operating under the MPSA brand. He is a highly experienced tour guide with over 19 years experience. He will be focusing on 4x2 tours in the Mpumalanga, Limpopo, Free State and Gauteng provinces. The tours will mirror the successful formula created by MPSA and offer excellent value for money with quality accommodation at fair prices.

The inaugural tour is a gem. It covers 26 passes over 5 days with many interesting side excursions to beguile and delight. It's aptly name the Mpumalanga Panorama Tour as it includes many passes in the vicinity of well known Panorama Route and of course, the Blyderivier Canyon and Graskop Gorge on the itinerary.

The joint venture will expand our tours into the northern sector of South Africa. This tour is being offered at a very special rate which will not be repeated again. To find out more and make an online booking take the link below:

Another 2 tours will be added by next week.

This fully booked event was a huge success. The tour was run on the Grabouw 4x4 venue, which offered fabulous scenery of forests, mountains, lakes and waterfalls as well as some challenging driving which kept all the novices on their toes. The successful event and demand has resulted in us offering a similar tour, but in a different area.

This is another first time venue for Mountain Passes South Africa. Guests will drive the Grade 1 to 3 route to the top of the mountains outside Rawsonville with sweeping views over the Worcester wine valley. In the process all the basics of offroad driving will be tutored. This will be followed by a bring & braai next to the river as well as a wine tasting session.
We only have one ticket available: BOOK HERE - WOLVENBERG 4X4 TRAINING & TOUR

Important announcement by the Dept of Transport and Public Works of the Western Cape Government.

The Department intends to repair and rehabilitate Bain's Kloof Pass through the repair of existing road failed areas and the provision of a new asphalt surfacing. The Works also include the general improvement of the drainage in the pass. The project will also address the stabilisation of unstable slopes in the pass as well as the upgrading of certain of the existing rest areas. Improved safety of the road users will also be addressed by improving the riding quality of the road and the repair of the existing stone packed barriers.The construction contract will commence in August 2020 with an anticipated contract duration of 17 months.

The full article with more detailed information is available on our FaceBook page. You will need to scroll back a few posts to the 26th August: READ FULL ARTICLE.

James McKay of 74th Highlanders in his book "Reminiscences of the Last Frontier War" records that after the landing of his regiment at Algoa Bay in May 1851, they marched to Grahamstown. They were engaged in patrolling the Waterkloof during July 1851. When on reaching Ayton's farm Rietfontein, they halted.

The following report in the "Grahamstown Journal" could possibly have referred to Rietfontein: 27/12/1853 - The 74th Regiment found 150 rebels at a deserted farmhouse and killed 4 of them. That evening the Regiment camped out at a spring where reeds grew.

Referring to the attached list of owners, you will notice that William Ayton was the first registered owner. He was an Innkeeper, owner of Ayton's Inn ( later Phoenix Hotel) Grahamstown. The title deed shows that Mr Ayton received his transfer grant to the farm, Rietfontein, in 1850 and no mention is made of " buildings thereon". The presence of a little stone house, some distance from the main buildings suggests that Ayton's transfer deed (or his original contract possibly made anything up to ten years before he received the actual deed) may not have included the fortified buildings at the time. 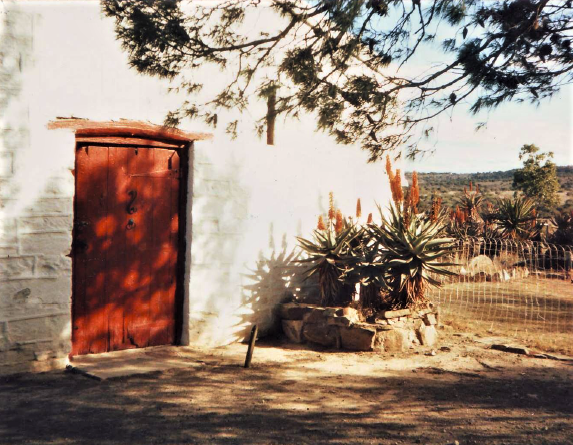 In 1836 Ayton's Inn required a man and wife … to 'take charge of the tap'. However on June 9th 1836, William Ayton announced that he was entering into partnership with H.J. Carter. So one may assume that between 1836 and 1846 Ayton sold his share and bought Rietfontein.

Originally the house could have had thatch, but there is no proof. We do know that the roof was covered with slate squares. (Slate squares were ballast for trading ships from Europe). A terrible hail storm in 1886 with goose-egg sized hailstones, badly damaged this roof covering. In 1906 corrugated iron sheerts were placed flat on the solid yellow wood which had supported the slate. This yellowwood was used in 1944/45 as flooring for the new extensions at the rear, when DJ Malan put all the separate additions under one roof. The original, and only entrance to the house on the side facing south, was where the present front door is. For the rest there were only a few loopholes. 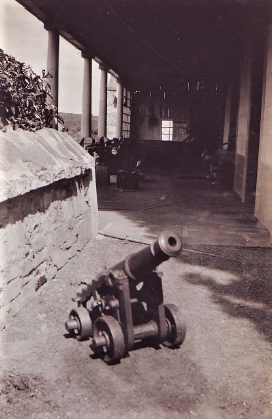 The living room was once an open quad! The entrance to this was barred by a heavy wooden door. The one protective wall going up to the house, the shape of the original gables and many other points of real interest appear on this sketch by L.B.S. on 23.4.99 (1899).

To the right of the front door, as you leave the house, there is a large steel window, this is where the quad's entrance once was, then barred by a heavy wooden gate. Also on the front stoep, you will find one of the original two ½ lb ship-type signal cannons. These were possibly used to call in patrols from the surrounding hills. (The other cannon is in the Fort Beaufort Historical Museum).

The one high wall at the back of the milking shed, still has the original loopholes intact. This is the original 10 ft height of the stone wall enclosure, (ringmuur) adjoining the house on the eastern side. At night it was used to "kraal" the stock.

The present garage shows the cobbled stable floor very clearly. Note that the ceiling is of Cabbage tree (Kiepersol). I have never known that tree to be used for any other purpose than for wagon brake blocks. Many of those ceiling boards are 12 inches wide:

The first door on the end of the outer buildings, in front of the house, is one of two original heavy type doors. The other is further down the same building. Note the Sneeze-wood lintel and the dressed mounting stone planted outside the stables.

Look for the original yellowwood saddle supports still mounted in certain walls, and have you ever heard of sheep being shorn on a yellow wood floor? (Up till December 1991 when the shed was converted to the modern New Zealand technique).

The section right at the end of the long building, is the best preserved of all the original buildings. This is a guard room. It has a firm wooden floor covering a prisoners' dungeon. Then there is a patrol passage for the guards, around the dungeon. There are holes in the wall for a platform, from which the guards could fire through loopholes high up in the wall. For normal daily use, there are four windows in line through the four thick walls, for ventilation and light. Heavy wooden shutters secured these windows at night. Prisoners on their way to and from Grahamstown, spent the night in the dungeon, under the floor where the guards, who were off duty, rested.

After 1850 the dungeon was used by the farmer to keep butter, and other farm produce, cool and fresh. While, after 1910, guttering was led into the dungeon, so as to have a reservoir of fresh water.

On going through and out of the Guard Room, onto the road passing between the two buildings, many signs of past history will be seen, when you look on the ground: pieces of porcelain, bone, roof slate, nails from horses' shoes, and many other items are still evident. 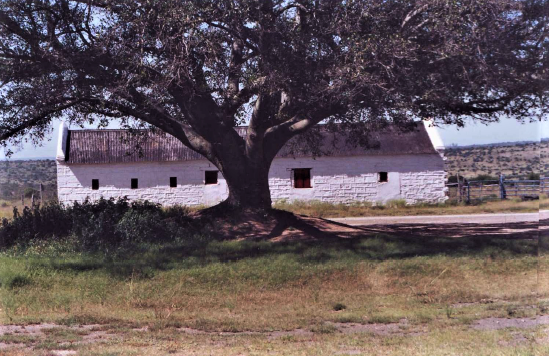 At the eastern end of the milking shed is an isolated Service Room (Duty Room). Here we find two large hinges fixed to the outside wall. A visible stone wall foundation runs from there down to the kloof. This appears to have been a controlling wall and " Toll Gate" on the road to the north.

The big tree, at the end of the outer buildings, is a Ficus Nataliensis, planted in about 1918 from a stump brought from Berlin, Cape Province. It really started growing well when its roots penetrated the adjacent dungeon (now filled with water).

For some unclear reason, the outer building is one long construction, but had different roof sections.

The last item on the agenda, is the little stone house, built way down near the dam. Previously we mentioned the fact that Ayton could have used it for a short period. The greater possibility and probability, is that, in the time troops occupied Rietfontein, there were quiet spells. The grazing not being properly utilised, defence could have leased the veld to private persons and that is the house they would have lived in.

Even to this day that house is known as "die land se huis" because of the cultivated piece of land surrounding the little house, in the years gone by.

Ed note - Many thanks to Danie Malan for sharing this lovely snippet of personal frontier history. As they say: "Uit die perd se bek"

This week we chat about the historic contruction of the Montagu Pass near George. CLICK TO LISTEN.

Our featured pass this week is one of the 26 passes that will be driven during our inaugural Mpumalanga Panorama Tour in October. You can cyber drive it here and get a taste of what to expect. This pass was named after after Paul Kruger's father Casper Kruger.