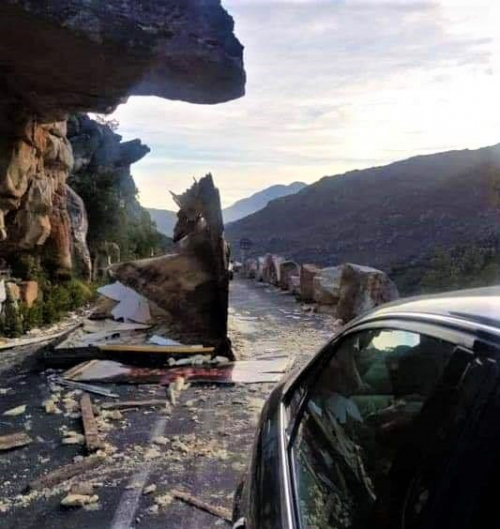 Stuck between a rock and a hard place 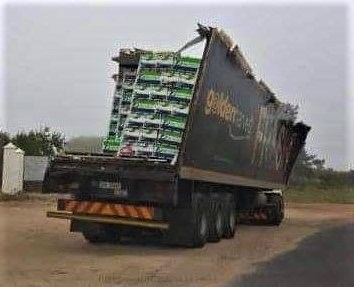 There can only be one explanation (maybe 2) / Photo: NARI Media

The driver of large truck had some explaining to do to his employer when he took this huge vehicle along Bain's Kloof Pass, ignoring the height warning chains and multiple height restriction signs and firmly jammed his truck under the historic overhanging rock known as Dacre's Pulpit, which has a height restriction of just 3.8m.

He caused a traffic jam of note as the pass had to be closed at either end for a long time as traffic officials and recovery crews struggled to untangle the wreckage. The truck came off second best and fortunately the pulpit remains firmly in place.

It does beg the question to be answered: 'How does a person who is a qualified heavy duty truck driver, who is entrusted with a vehicle worth several million Rand, do something as utterly stupid as this'.

This incident comes just ahead of the pass being closed for 18 months for repairs and resurfacing.

Tiffindel Ski Resort is closed. This affects anyone wanting to do the Ben 10 Eco Challenge. We have had confirmation from the owner, Lew Campbell, that the property is out of bounds to the public. Effectively this means that the Ben MacDhui pass (3001m) - the highest motorable pass in South Africa, is closed to the public until further notice. We have posted an advisory on the Ben 10 Entries page as well as the relevant pass page.

Once the dust has settled and we have more accurate information regarding the ski resort's future, we will keep you informed. There are several options on the table of how we will deal with the Eco Challenge which has grown to become the most popular offroad challenge in South Africa and we will most definitely come up with an innovative plan to keep it going.

This fully booked tour was scheduled to take place on Sunday 13th September, but a severe weather warning forced us to rethink the logistics in favour of safety. We moved the date one day earlier, but only some of the guests could make it, so we offered the tour to be repeated on Sunday 20th September for those that couldn't make the earlier date. The result was that we had a small compact convoy of 6 vehicles and beautiful warm weather, which is always a game changer on the enjoyment meter.

In our group, we had two brand new Jimnys and two Fortuners, plus our sweep guide in a VW Amarok and myself in the Land Cruiser. The first problem we encountered was that both the Fortuners (automatics), despite having selected 4WD low range, were emitting warning beeps. It took a little while and a reference in the handbook to figure out what the problem was. It is necessary to come to a complete stop and put the vehicle into neutral before selecting 4WD LR. As soon as we figured that out both vehicles were fine. They simply stopped and repeated the procedure as per the handbook. Thanks to Andrew Hepburn for the heads up.

The two Jimnys easily negotiated the steep terrain, not one of them having any issues. Our sweep guide, Shaun in a VW Amarok, reported an overheating automatic gearbox warning about 3/4 way up the mountain. He switched the vehicle off to allow it to cool down and once it was restarted, it was fine for the rest of the day. We had a similar scenario during a tour last year where a very long and slow climb had both of the 200 series Toyota Land Cruisers showing warning lights about overheating gearboxes. In that case, the drivers had just allowed the gearbox to do the work for them, whereas the solution was to switch to low range, which increased engine revolutions and the ability for the gearbox oil to not overheat. 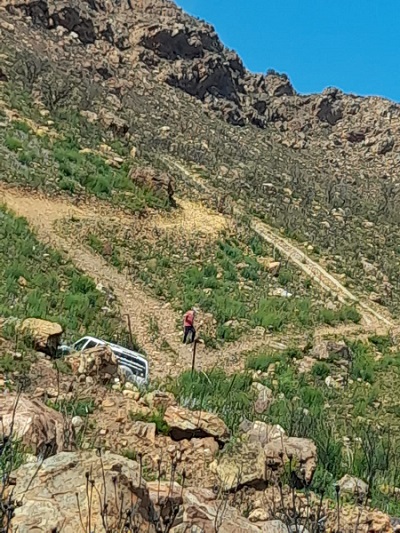 We used this obstacle to demonstrate what a 4x4 is really capable of / Photo: Claire Edson

Safety is our number one concern when we do tours and I was to fall victim of not practising what I preach, with rather painful consequences. I was guiding the VW Amarok over a tricky and steep section with lots of loose rocks and had bent down to ensure that the diff wouldn't scrape on a rock. The Amarok was in crawl mode and I just happened to be walking behind the right rear wheel, when a fist sized rock suddenly and very unexpectedly shot out from under the wheel like a cannon ball and hit me in the middle of my shin. Besides a deep 'dongha' of about one inch diameter and a good dollop of blood, there was nothing broken. It could easily have been a broken leg. Moral of the story is always stand clear of the wheels (all four of them).

After getting everyone safely down the mountain it was rewarding to see all the novice drivers beaming from ear to ear and exuding confidence. For the first time on any of our day tours, we lit a braai fire and enjoyed a tasty meal in one of the lapas at the Wolvenberg farm. It was a weary and happy bunch of drivers and families who made it home well after sunset.

As forecast, at about 4 in the morning on the Sunday, gale force winds and heavy rain pummelled the Worcester Winelands, proving it was a wise decision to move the dates. This coming Sunday the other 6 vehicles will enjoy the same tour with a few improvements.

Wolvenberg is a private farm and permission and a fee is required to drive the route, which takes about 3 hours to complete.

Each week we will explore one of South Africa's cities and discover some of the hidden gems worth exploring.

The origin of the city's name is disputed. It has been assumed to be from the Dutch words bloem (flower) and fontein (fountain), meaning fountain of flowers. Popular colonial legends include an ox named "Bloem" owned by Rudolphus Martinus Brits, one of the pioneer farmers that was taken by a lion near a fountain on his property, while the more likely indigenous history names Jan Bloem II (1775–1858), a !Ora ("Korana" Khoekhoe) leader who settled there.

His father, Jan Bloem, was a fugitive from the Cape Colony, where he reportedly was escaping arrest after murdering his first wife. Bloem was well known as an expert marksmen, and married into the ǀHõaǁʼaes (Katz clan)

Though historically a !Orana settlement, and then a Boer settlement, Bloemfontein was officially founded in 1846 as a fort by British army major Henry Douglas Warden as a British outpost in the Transoranje region. 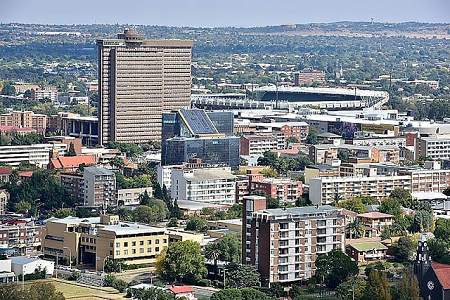 Warden originally chose the site largely because of its proximity to the main route to Winburg, the spacious open country, and the absence of horse sickness. Bloemfontein was the original farm of Johannes Nicolaas Brits born 21 February 1790, owner and first inhabitant of Bloemfontein. Johann – as he was known – sold the farm to Major Warden.

The Orange Free State was an independent Boer sovereign republic in southern Africa during the second half of the 19th century. As the capital of the Orange Free State Republic the growth and maturing of the republic resulted in the growth of Bloemfontein. The city constructed numerous public buildings that remain in use today, facilitated by the governance of the republic and compensation from the British for the loss of the diamond rich Griqua Land area. The old Orange Free State's presidential residence the Old Presidency is currently a museum and cultural space in the city.

A railway line was built in 1890 connecting Bloemfontein to Cape Town.

The writer J. R. R. Tolkien was born in the city on 3 January 1892, though his family left the Orange Free State when Tolkien was three (1895). He recorded that his earliest memories were of "a hot country".

In 1899 the city was the site of the Bloemfontein Conference, which failed to prevent the outbreak of the Second Boer War. The conference was a final attempt to avert a war between Britain and the South African Republic. With its failure the stage was set for war, which broke out on 11 October 1899.

The rail line from Cape Town provided a centrally located railway station, and proved critical to the British in occupying the city later.

On 13 March 1900, following the Battle of Paardeberg, British forces captured the city and built a concentration camp nearby to house Boer women and children. The National Women's Monument, on the outskirts of the city, pays homage to the 26,370 women and children as well as 1,421 old men (also 14,154 black people, though some sources feel that the records are unsatisfactory, and that this number could be as high as 20,000) who died in these camps in various parts of the country.

The hill in town was named Naval Hill after the naval guns brought in by the British in order to fortify the position against attack.

A chat covering Part 2 of the construction of Cogmanskloof near Montagu. CLICK TO LISTEN

Winding through the hills and valleys of the Wild Coast this interesting pass is the newest to be added to our database. We filmed it in February, 2020.

Words of wisdom: "If you want to achieve greatness stop asking for permission." -- Anonymous