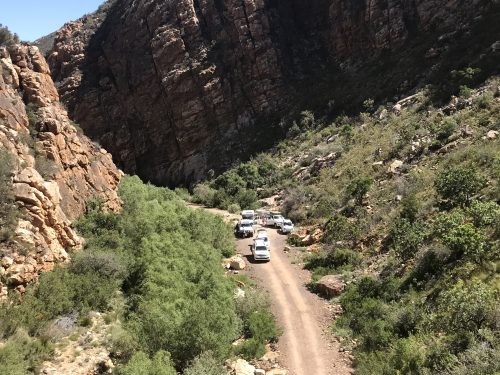 We've been inundated with requests to book for our 2021 Wild Coast Tour. We are already working on some improvements to the 2020 version, so it's just a matter of picking dates. The next 8 days will be spent on setting up the major tours for 2021, which will include the Ben 10, Wild Coast, Swartberg, Bedrogfontein and Tankwa Tours. Once we have the dates mapped our for those, we will see how we will slot in the new tours.

The Swartberg Hotel is very much like the Lord Milner in Matjiesfontein. It's a rambling, old double story building with many add-ons at the back and the gracious old building is showing her age somewhat with oddly shaped rooms, creaking passageways, old artefacts and paintings on the walls and staircases that are narrow and steep. Yet all of those things add to the charm. Modern equipment, like airconditioners have been added to keep pace with customer demands.

We were to spend two nights at the hotel and the one feature we have to highlight is the quality of their food. Our meals were excellent and sitting outside on the verandah on the warm summer evenings watching the passing parade of locals, was as relaxing as anything you could find in the Karoo.

We had a number of highlights on this tour and on Day 4 it was the drive down the Gamkaskloof to Die Hel. We left at 08.30 and took a leisurely drive up the Swartberg Pass, stopping here and there at the various points of interest like Eerstewater, Malvadraai, Blikstasie, Mullerskloof and Teeberg as many gigabytes of photos were added to camera memory banks. The weather was warm and clear, making for a special day.

We started the the 37 km westward drive along the Otto du Plessis Road (that's its official name) at 10.30 enjoying the hundreds of sights offered up by the contorted layers of the Swartberg Mountains. There were the usual klipspringers that allow cars to get as close to 2m from them, whilst raptors soared overhead. This road has a magical allure to it that captivates the adventure traveller, regardless of age or mode of transport.

Finally we reached the summit of Elands Pass, where many of our guests got sight of Die Hel for the first time. Camera shutters clicked away for at least 10 minutes. Our convoy snaked its way cautiously down the pass, with its many hairpins and within 15 minutes arrived at the start of Die Hel. We had seen it the day before from the western side, when we did the 4x4 trail at Bosch Luys Kloof Nature Reserve, but this eastern approach is the real McCoy.

The valley was a mangled ashen blur of burnt trees and collapsed buildings - almost like a cataclysmic setting in a Hollywood disaster movie. The fire that swept through the valley on Christmas Day 2019 destroyed about 60% of the cottages. Our destination for our lunch time stop was Fonteinplaas, where Marinette and her mother in law, Annatjie Joubert were a bit taken aback to see 24 guests arriving for lunch. All our attempts to contact them in advance had failed, so we took a chance and pitched.

It took Marinette about 15 minutes to serve up a delicious lunch for our group. Now that was an impressive effort! Whilst we waited, Annatjie told us the story of the big fire. She's a tough lady, but the tears welled up in her eyes as she spoke. The fire had consumed all their cottages as well as their campsite and its ablutions. Her son was on the roof of the thatched restaurant with a hosepipe as the fire raged all around them. She had called him down.

They knelt on the grass, held hands and prayed. She told us how within seconds, the wind suddenly changed direction and whisked the fire eastwards up towards the pass. The restaurant, their home and one of the cottages had been spared. It was an emotional talk that had us all listening in rapt silence.

Die Hel is a cul de sac, so we had to retrace our route back to the hotel, where cold showers and cold beers were most welcome. Another 40C day in the Karoo.

[Next week: Day 5 and the final day of the tour]

This was the tour that we moved the dates three times due to lockdown and travel restrictions. The preparation that went into this tour amounted to hundreds of hours poring over maps, phoning local places in the Transkei for advice, ensuring the safety of our guests and not least of all - a 7 day recce trip to suss things out in person.

It was with a sense of relief that we departed Cape Town on Wednesday 11th November, destination Cradock. The trip was finally taking place. We routed via Beaufort West, then across to Aberdeen, Graaff-Reinet and over the Wapadsberg Pass to Cradock with it's beautful old buildings.

We overnighted at the Victoria Manor Hotel and had an enormous suite all to ourselves with 2 en-suite bedrooms and a completely fabulous kitchen fitted with an AGA stove and Oregon tables and chairs. Throughout the annexe we could walk on creaking floors cobbled together with nail heads worn shiney from thousands of feet. The food was excellent too. 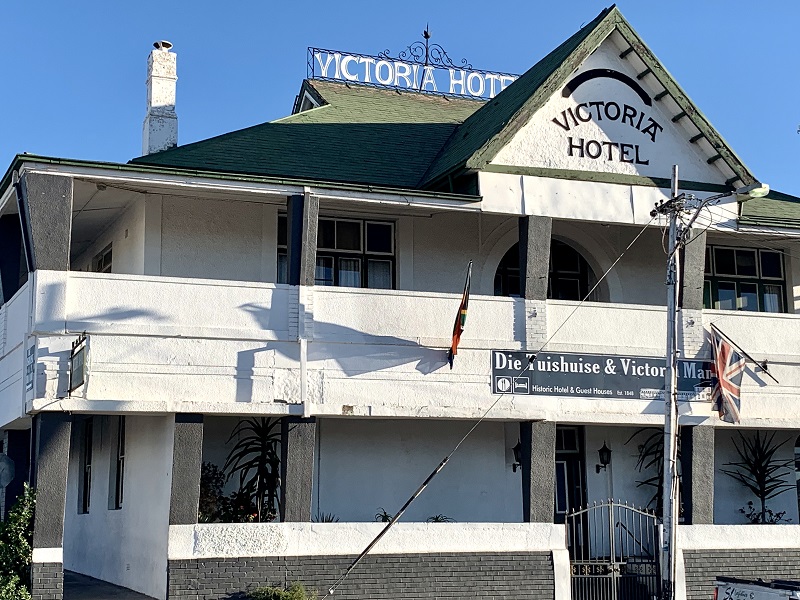 A late evening stroll through the town showed the change in the atmosphere of this once proud town - home of sufrragette Olive Schreiner. The beautiful and expertly built old church steadily losing ground to the tacky malls with their litter and throngs of people. The streets are wide and dusty. Big trucks drone through the town at all hours of the day and night. Life is not easy for many in Cradock.

The next morning we had a much shorter drive from Cradock to Matatiele, routing via Tarkastad, Queenstown, Mount Frere (perhaps the strangest of all towns in the Eastern Cape), Cala, Elliot, Ugie and Maclear - finally reaching Matat and our favourite local guest house, Resthaven, at 1500. Philip & Elrita Rawlins were waiting to welcome us - their first big group since lockdown began. The weather was idyllic as happy hour got underway and the first drivers briefing set the tone for what would become a marvellous tour. Dinner that night included the most tender and tasty lamb shanks. Elrita sure knows how to cook!!

Not all the guests had arrived. Richard and Heather Heathcote, who drive a Toyota Land Cruiser 'bakkie' called to say their vehicle had broken down between Pietermaritzburg and Kokstad and that they were waiting for a lowbed. A short while later a second message came through stating that a good friend said they could use his Land Rover Defender and still complete the tour. And so started the obvious ribbing between the legendary reliability of the Land Cruiser versus the unreliability of the Land Rover, but Richard batted the comments with a robust sense of humour.

Natalie du Toit is a South African swimmer. She is best known for the gold medals she won at the 2004 Paralympic Games as well as the Commonwealth Games. She was one of two Paralympians to compete at the 2008 Summer Olympics in Beijing; the other being table tennis player Natalia Partyka. Du Toit became the third amputee ever to qualify for the Olympics, where she placed 16th in the 10K, "Marathon", swim. 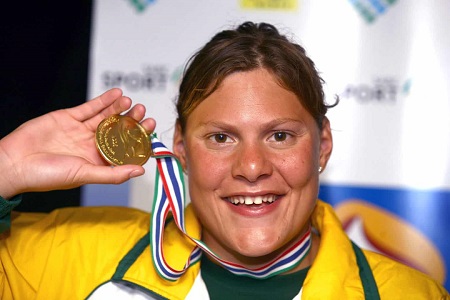 Du Toit was born in Cape Town, South Africa and attended Timour Hall Primary school. She began competing internationally in swimming at the age of 14. In February 2001 her left leg was amputated at the knee after she was hit by a car while riding her scooter back to school after swimming practice. She was 17 at the time. Three months later, before she had started walking again, she was back in the pool with the intention of competing in the 2002 Commonwealth Games. Du Toit swims without the aid of a prosthetic limb.

She completed her scholastic education at the Reddam House, Cape Town after which she studied for a Bachelor of Science degree at the University of Cape Town, specializing in genetics and physiology. In her free time she does motivational speaking.

Cape Town is the second most populous city in South Africa, after Johannesburg, and is also the legislative capital of South Africa. Colloquially named the Mother City, it is the largest city of the Western Cape province and forms part of the City of Cape Town metropolitan municipality. The Parliament of South Africa is situated in Cape Town. The other two capitals are located in Gauteng (Pretoria the executive capital where the Presidency is based) and in the Free State (Bloemfontein the judicial capital where the Supreme Court of Appeal is located).

The city is known for its harbour, for its natural setting in the Cape Floristic Region, and for landmarks such as Table Mountain and Cape Point. Cape Town is home to 64% of the Western Cape's population. The city was named the World Design Capital for 2014 by the International Council of Societies of Industrial Design.

Cape Town !!!In 2014, Cape Town was named the best place in the world to visit by both The New York Times and The Daily Telegraph. Cape Town has also been a host city for both the 1995 Rugby World Cup and 2010 FIFA World Cup, annually hosts the Africa leg of the World Rugby 7s.

Located on the shore of Table Bay, Cape Town, as the oldest urban area in South Africa, was developed by the Dutch East India Company (VOC) as a supply station for Dutch ships sailing to East Africa, India, and the Far East. Jan van Riebeeck's arrival on 6 April 1652 established the VOC Cape Colony, the first permanent European settlement in South Africa. Cape Town outgrew its original purpose as the first European outpost at the Castle of Good Hope, becoming the economic and cultural hub of the Cape Colony. Until the Witwatersrand Gold Rush and the development of Johannesburg, Cape Town was the largest city in South Africa. It's current population is roughly 4 million.

Our featured pass this week is the Mzimvubu Pass - the last of a trio of sinuous passes on the R61 between Lusikisiki and Port St. Johns.

Words of Wisdom: "For every reason it's not possible, there are hundreds of people who have faced the same circumstances and succeeded" ~ Jack Canfield.