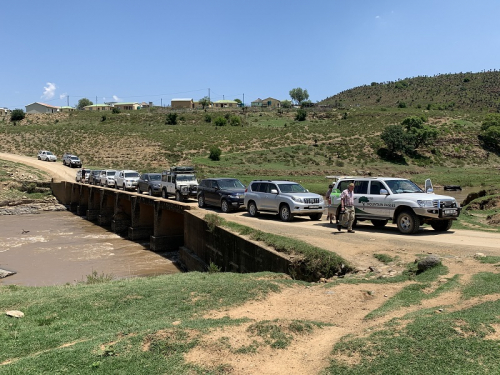 Parked on the bridge over the Umzimvubu River - Photo: Trygve Roberts

It was another perfect day for youring with warm weather, clear skies and light traffic. We managed to get the convoy ready to roll by 09.15 with slight holdup coming from the Land Rover Defender, not wanting to start. Richard soon got the hang of always parking on a slope with a clear run to bump start it.

We headed east to Cedarville on the tarred R61. About 10 km out of Matatiele, my phone rang. It was Philip from the guesthouse, advising that one of our guests had left some personal items behind. He asked that we should pull the convoy over and he would deliver the goods, which he duly did. This level of service is part of the service package at Resthaven and one of the reasons why we keep returning.

Just after passing through Cedarville, we turned south onto a good gravel road and soon ascended the Nungi Pass. This relatively unknown pass has some impressive statistics. The Nungi Pass is named after the mountain of the same name which forms the western portal of the Umzimvubu River valley. The pass traverses tribal trust land and connects Cedarville in the north with Mount Frere in the south. It's of above average length at 8,7 km and packs 39 sharp bends, corners and curves into it's length and displays an altitude variance of 335m with a classic high centre point profile. The gradients are steep in some places, reaching 1:5 making 4WD essential in wet weather.

When we did the recce trip for fhis tour in February 2020, the road was in the process of being upgraded. Our timing in November couldnt have been better, as the roadworks had been completed, making for a comfortable traverse. The scenery is lovely with sweeping views of rolling grassland, dotted with well fed cattle. Once over the summit, the views open up to the south over the village of Matafeni. This was to the first of many small villages that we passed through, where the locals all greeted us with waves and smiles.

The valley when viewed from the summit of the Nungi Pass, conceals several villages hidden in the folds of the mountains. To the immediate west lies the mountain village of Gxenlikulu, followed to the south by Upper Mvenyane. Further south another two long villages are traversed - Ntola and Tyiweni. Each village has its own character, style and charm. Everywhere there is livestock - mainly cattle and goats and of course dogs. Surprisingly cats don't seem to do so well here. Sheep are also not that common.

Another short climb and the road forks. I could write a book about the forks. The forks fork and fork again and again and again. It's like a giant maze. Very few of them have signs. Without local knowledge, you are guaranteed to get horribly lost, unless you have done your navigation homework thoroughly.

Soon we crested Colona Nek Pass. This pass traverses the substantial rural settlement of Colona (from which it takes it's name) so drivers need to be aware of livestock, pedestrians, slow moving vehicles and minibus taxis throughout this traverse. The scenery is lovely with colourful mud huts bedecked with thatch adding a splash of colour to the scenery.

After Colona Nek, the villages are more spread out. We had an easy drive, steadily heading south past the village of Mthombo, where the direction of the road changes abruptly into the east, in preparation for the crossing of the Mzimvubu River. This crossing is over a single width concrete bridge and where we decided to stop for a photo-shoot and a leg stretch, but our plan was soon interrupted by a large truck that needed to cross the bridge. Once again the driver (a local Xhosa man) was kind, obliging and full of smiles and the infinite patience of Africa as we took several minutes to clear the bridge for him to proceed.

Benedict Wallet Vilakazi (6 January 1906 – 26 October 1947) was a South African Zulu poet, novelist, and educator. In 1946, he became the first black South African to receive a Ph.D. Vilakazi Street in Soweto is named after him and it is now famous as the place where both Nelson Mandela and Desmond Tutu once lived. 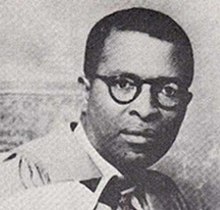 Benedict Vilakazi was born Bambatha kaMshini in 1906 at the Groutville Mission Station near KwaDukuza, Natal. Vilakazi split his childhood between herding the family cattle and the local mission school until the age of 10, at which point he transferred to the St. Francis College in Mariannhill, a coeducational Roman Catholic secondary school founded by the local Trappist monastery. Here he was baptized with the name "Benedict Wallet," though at his mother's insistence he kept the family name of Vilakazi. He obtained a teaching certificate in 1923 and taught at Mariannhill and later at a seminary in Ixopo.

In 1933, Vilakazi released his first novel Nje nempela ("Really and Truly"), one of the first works of Zulu fiction to treat modern subject matter. He followed it in 1935 with the novel Noma nini as well as a poetry collection Inkondlo kaZulu, the first publication of Western-influenced Zulu poetry.

Vilakazi's later novels continued to explore daily Zulu life, such as UDingiswayo kaJobe (1939) and Nje nempela (1944), the story of a traditionally polygamous household. His poetry, heavily influenced by European Romantic styles, fused rhyme and stanza forms previously unknown in Zulu with elements of the izibongo, traditional praise poetry. His poetry became increasingly political in the course of his life, dramatizing the exploitation of not only the Zulus but of black Africans generally. Both his novels and poetry were well received in his own lifetime and remain so today.

Vilakazi is also noted for his scholarly work on oral tradition and the Zulu and Xhosa languages, which on 16 March 1946, earned him the first Ph.D. to be won by a black South African.

A year after receiving his doctorate, Benedict Wallet Vilakazi died in Johannesburg of meningitis.

Vereeniging is situated where the Klip River empties into the northern loop of the Vaal River. It is also one of the constituent parts of the Vaal Triangle region and was formerly situated in the Transvaal province. The name Vereeniging is derived from the Dutch word meaning "union". In 2016 it was the 6th largest city in South Africa with a population of 957000.

In 1879, George William Stow was commissioned by the Orange Free State government to look for coal deposits in the Bethlehem district.  With no deposits found he moved northwards to Maccauvlei on the Vaal River and then crossed the river to the Transvaal side. On the farm Leeuwkuil, he found a coal deposits twelve feet thick, but the Orange Free State government believed that it was too far away and there was a lack of transport so turned down the idea of mining.

Stow settled in Kimberley in order to find a job where he met Samuel Marks who realized after hearing the formers story, the opportunity for coal at the Kimberley diamond fields for energy generation. Marks formed the De Zuid Afrikaanshe en Oranje Vrystaatsche Kolen and Mineralen Vereeniging (South African and Orange Free State Coal and Mineral Association) and sent Stow to purchase the farms where the coal was found. On the 25 November 1880 he purchased the farm Leeuwkuil for £5,000 and 12,000 acres. Marks' agent J.G. Fraser would purchase the farm Klipplaatdrift of 6,000 acres from Karl August Pretorius in October 1881 for £15,500. This was opposite the farm Maccauvlei. From 1881, coal was taken by ox-wagon to Kimberley and by 1882 there was so much development that there was a need to survey a village on the two farms and the Volksraad agreed naming it after the company's shortened name Vereeniging.

The city's motto is Per Pacem ad Industriam (Through peace to industry). It is currently one of the most important industrial manufacturing centres in South Africa, with its chief products being iron, steel, pipes, bricks, tiles and processed lime. Several coal mines are also still situated in the area, with reserves being estimated at four billion tons. Other mines nearby extract fire-clay, silica and building stone. Vereeniging also has several Eskom thermal power plants that supply electricity to the nearby goldmines.

We take you through the first day of our recent Wild Coast Tour. Click to listen.

We head off into South Africa's mountain desert in the Northern Cape to cyber drive one of two passes with the same name. This pass is famous for it's thousands of stone cairns erected by passing travellers and terminates at the Orange (Gariep) River.

"Be kind whenever possible. It is always possible" ~ Dalai Lama