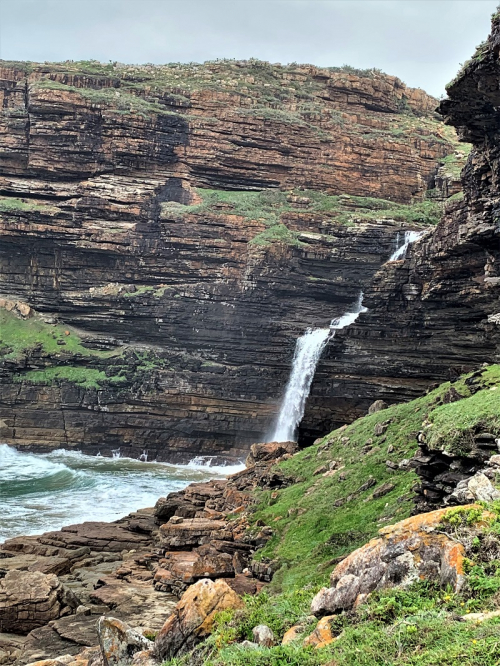 What an incredible year we have all loved through! It's been a time when we realised how important health and family are. A time of digging deep to survive. A time of empathy with those businesses that didn't make it. A time of reaching out to help others. For most of us, the sooner we can usher in 2021 the better.

However the reality is that Covid 19 is going to be with us for a while and it won't magically disappear. The new everyday words like masks and social distancing have become ingrained in us. Christmas will be different this year. Quieter. Family only.

All has not been bad from this year. We have taken some good lessons out of 2020.

From the team at Mountain Passes South Africa, we are delighted to announce that 2020 saw an exponential growth in readership and social media following. We have doggedly stuck to our recipe of variety, positive news, quality photography and information that is informative, interesting, uplifting and topical. Clearly we offered what a lot of people were looking for.

We thank you for your support and we wish you and your family a wondrous Christmas and a better new year. Travel safe and hang in there!

The Ben 10 V4 Eco Challenge Official Tour is taking place over Easter 2021. We have crafted this tour over the past four years into a fine experience of excitement, relaxation and stunning scenery coupled with a few amazing points of interest, like watching the vulture colony at The Castle.

1. Conquer the 10 challenging high altitude passes of the Eastern Cape.
2. Enjoy some of the most spectacular scenery you will ever see.
3. Discover the fascinating history of the area first hand with an experienced guide.
4. See the vulture colony at The Castle
5. Enjoy the camaraderie of like minded adventure travellers
6. Savour delicious home cooked country food.
7. Enjoy comfortable accommodation each night at the same venue so you can travel light.
8. Test your offroad driving skills in the safety of a group.
9. Discover Rhodes Village
10 Visit the highest pass in South Africa (3001m)

We are running the Ben 10 V4 over the Easter Weekend not only because of the number of holidays involved, but at that time of the year, the worst of the summer storms are over, leaving the region under a carpet of lush greenery, which greatly enhances the already majestic views and makes for impressive photography.

We woke to the sound of gentle surf on the beach at Mbotyi River Lodge. The day was scheduled for a substantial walk to Waterfall Bluff and Cathedral Rock, but it was a free day, so guests could opt for a range of other activities - like bird watching, swimming, canoeing on the lagoon, or simply relaxing in the lovely gardens at the lodge.

We made use of a local guide, Armstrong, to show us the way to the falls. He rode up front with us in the Land Cruiser, as we tackled a rather dubious looking road which later became a proper 4x4 route, as we bounced and slid our way down the escarpment to a tiny hamlet called Lupathana. It took us a full two hours to get there - a distance of just 20 km as the crow flies! 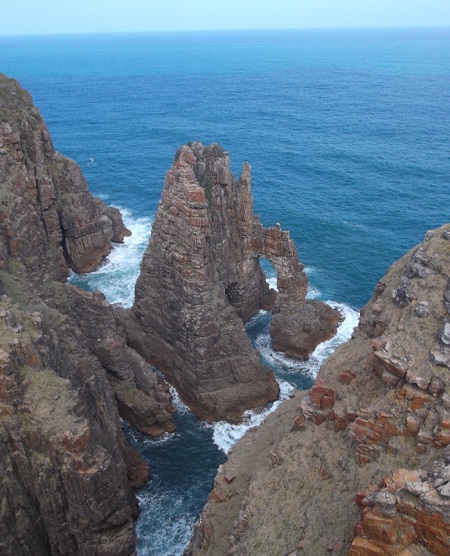 A friend of Armstrong arranged to look after our vehicles for the day at a small fee. In short order our group of about 15 hikers set off to cross the river via some stepping stones, then up the other side through a backpackers bush camp. The day was cool, but humid with the promise of some rain later in the day.

The walk to Waterfall Bluff is undulating and not particularly difficult, but it feels like a lot longer than 4 km when you're doing it! Finally the tone of the surf which been our companion all morning, changed somewhat and around the next bend the fabulous spectacle of Waterfall Bluff awaited. I had seen dozens of photos of the falls, but there is nothing like seeing it up close and personal. The falls consist of a set of three cascades, which are not all visible from the lower viewpoint. A torrent of white water pours out of the jagged rockface directly onto a narrow bay, where the ocean waves compete for supremacy. We spent our lunch break at the falls enjoying this bounty of nature.

After lunch our group split up. Those with more energy, walked another 3 km along the coastline to see Cathedral Rock - a dramatic column of rock with an arch in the centre, which rises up out of the sea. The smaller group which turned back at the waterfall reached Lupathana just as the tide was coming in, accompanied by a steady drizzle. It would be another hour before the rest of group arrived, who had the salty experience of having to wade through the lagoon at waist depth and drive home in wet clothes.

The dinner back at the lodge that night was a festive affair, as guests retold their adventure and swapped photos.

Max Theiler (30 January 1899 – 11 August 1972) was a South African-American virologist and physician. He was awarded the Nobel Prize in Physiology or Medicine in 1951 for developing a vaccine against yellow fever in 1937, becoming the first African-born Nobel laureate.

Born in Pretoria, Theiler was educated in South Africa through completion of his degree in medical school. He went to London for postgraduate work at St Thomas's Hospital Medical School, King's College London, and at the London School of Hygiene and Tropical Medicine, earning a 1922 diploma in tropical medicine and hygiene. That year, he moved to the United States to do research at the Harvard University School of Tropical Medicine. He lived and worked in that nation the rest of his life. In 1930, he moved to the Rockefeller Foundation in New York, becoming director of the Virus Laboratory. 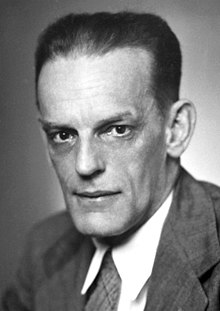 Theiler wanted to pursue a career in research, so in 1922, he took a position at the Harvard University School of Tropical Medicine in Cambridge, Massachusetts. He spent several years investigating amoebic dysentery and trying to develop a vaccine for rat-bite fever.

After becoming assistant to Andrew Sellards, he started working on yellow fever. In 1926, they disproved Hideyo Noguchi's hypothesis that yellow fever was caused by the bacterium Leptospira icteroides. In 1928, the year after the disease was identified conclusively as being caused by a virus, they showed that the African and South American viruses are immunologically identical. (This followed Adrian Stokes' inducing yellow fever in rhesus macaques from India). In the course of this research, Theiler contracted yellow fever, but survived and developed immunity.

After passing the yellow fever virus through laboratory mice, Theiler found that the weakened virus conferred immunity on rhesus macaques.The stage was set for Theiler to develop a vaccine against the disease. Theiler first devised a test for the efficacy of experimental vaccines. In his test, sera from vaccinated human subjects were injected into mice to see if they protected the mice against yellow fever virus. This "mouse protection test" was used with variations as a measure of immunity until after World War II. Subculturing the particularly virulent Asibi strain from West Africa in chicken embryos, a technique pioneered by Ernest Goodpasture, the Rockefeller team sought to obtain an attenuated strain of the virus that would not kill mice when injected into their brains. It took until 1937, and more than 100 subcultures in chicken embryos, for Theiler and his colleague Hugh Smith to obtain an attenuated strain, which they named "17D". Animal tests showed the attenuated 17D mutant was safe and immunizing. Theiler's team rapidly completed the development of a 17D vaccine, and the Rockefeller Foundation began human trials in South America. Between 1940 and 1947, the Rockefeller Foundation produced more than 28 million doses of the vaccine and finally ended yellow fever as a major disease.

For this work, Theiler received the 1951 Nobel Prize in Physiology or Medicine. Theiler also was awarded the Royal Society of Tropical Medicine and Hygiene's Chalmers Medal in 1939, Harvard University's Flattery Medal in 1945, and the American Public Health Association's Lasker Award in 1949.

Polokwane (meaning "Place of Safety" in Northern Sotho), also known by its former name, Pietersburg, is a city and the capital of the Limpopo Province of South Africa. It is South Africa's largest urban centre north of Gauteng. Polokwane was one of the host cities of the official tournament of the 2010 FIFA World Cup.

In the 1840s, Voortrekkers under the leadership of Andries Potgieter established Zoutpansbergdorp, a town 100 km to the northwest. This settlement had to be abandoned because of clashes with the local tribes. They founded a new town in 1886 and named it "Pietersburg" in honour of Voortrekker leader Petrus Jacobus Joubert. The British built a concentration camp at Pietersburg during the Boer War to incarcerate almost 4,000 Boer women and children. The town officially became a city on 23 April 1992. 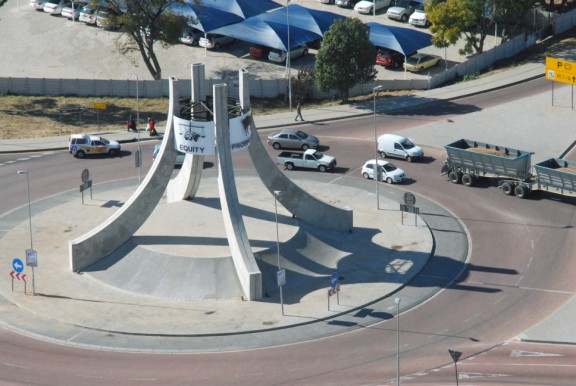 Polokwane provides access to various nature and wildlife viewing opportunities for ecotourists. The Polokwane Bird and Reptile Park is home to over 280 species of birds. The Polokwane Game Reserve houses various South African species of wildlife, birdlife, and plants in an unspoiled bushveld environment. The Moletzie Bird Sanctuary protects rare birds like the Cape vulture. The Modjadji Rainforest near Duiwelskloof holds the largest concentration of indigenous cycads in the world, and Cheune Crocodile Farm provides a place to learn about the life of crocodiles.

An extensive art collection is preserved in Polokwane's art gallery, open to the public. The city has more public sculptures per capita in its parks than elsewhere in South Africa. Polokwane was also the first to unveil a bust of the ex-president Nelson Mandela in its City Square (Civic Gardens), and it was authorised by Nelson Mandela personally.

The city is considered the premier hunting destination in South Africa.

Polokwane has very few passes in the immediate vicinty, but we have selected a very scenic tarred pass about 80 km to the west as our pass of the week. Set amongst the brooding cliffs and magnificent mountains of the eastern Limpopo escarpment, this stunning pass comes as an unexpected and welcome surprise when travelling on the R518 between Mokopane and Marken. With 26 corners, one of which is a sharp hairpin of 160 degrees with a long bridge at its apex; a length of almost 10 km and a height gain of 415 metres, this beautiful pass could be counted amongst the top passes in the country.

Nkudosweni Pass - This attractive pass on the R61 forms a back to back traverse together with the Umzimvubu Pass between Lusikisiki and Port St Johns.

Words of wisdom: "The only way to do great work is to love what you do"~ Steve Jobs