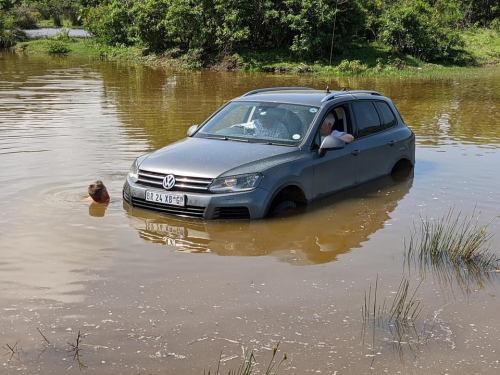 Stuck in the middle with you. - Photo: Wild Coast Tour Group

I am happy to report that MPSA has survived Covid 19. All of the team (and we all caught the virus thanks to a visit to the local hospital by your scribe) are now almost fully recovered and officially part of the herd. Happy days!

We have four tickets left for your 2021 Ben 10 Tour which takes place over the Easter Weekend. It's a perfect opportunity to get away from the city, Covid and all its negatives and breathe in some fresh mountain air, whilst tackling the technical driving, adventure, amazing scenery and country hospitality. For full details, pricing, itinerary etc, take this link:

The Wild Coast is always full of surprises. After our lunch break not far from the Gologodwini River, we got our convoy going and very soon arrived at the river crossing. The old concrete bridge had been mostly swept away in a flood many years ago and the entrance and exit of the road on either side of the river indicated clearly the correct line to take, leaving the remnants of the old bridge to the left.

Always practising what we preach, we sent the youngest male in our group to walk the river. The honour fell on the shoulders of young Russell Watkins. As the rest of watched, Russell waded in first crossing the proposed right hand track - text book style - whilst using a hiking stick to probe for rocks and holes. The deepest side was on the far side, where the water reached his upper thigh, with the width of the river measuring in at about 30m.

If we decided to turn around, it would have meant a very long drive back to the R61 then up to the N2 and again down to Coffee Bay. It also would mean the group would miss out on the rest of the fabulous passes along our proposed route. I decided to play guinea pig and take the Land Cruiser through the river (a) as a real time test and (b) to give the other drivers some motivation to attempt the crossing. The Cruiser went across effortlessly.

We then coaxed the rest of the drivers across one by one. At that stage we had an audience of locals sitting up on the hill watching the fun amidst much cheering from those that had made it safely across. Our biggest concerns were the two Suzukis - one being a Grand Vitara and the other an old level Jimny 130, but typical of Suzuki, they both crossed successfully. Finally there was one vehicle left. Jim Rankin's VW Touareg.

Jim drove the line perfectly but as the water reached the vehicle's wading depth, the motor cut out. We towed it out with the Defender and then all the mechanical minds started figuring out how to get the vehicle going again. We spent well over an hour there, but the VW stubbornly refused to start.

The decision was made to distribute all the luggage amongst the other vehicles and Jim and Zen Rankin took up passenger seats in one of the other 4x4's. We marked the position on the GPS to ensure the recovery crew would be able to locate it. One of our guests, Tony Nicholas, had a satellite phone which Jim used to call his insurance and the VW agents in East London.

We continued our journey driving some astonishing passes that I have never even heard of. Most of them were wildly remote and some had not seen a vehicle in many years. There were more bridges washed away, but the rest of the river crossings were all relatively shallow and easily manageable.

We finally arrived at Coffee Bay just before a massive storm broke sending down torrents of rain. The rain continued throughout the night, resulting in the next day's route being amended to mainly tar roads. All the guests seemed relieved. Jim had in the meantime been in contact with the recovery people, his insurance and the VW agents. Arrangements had been made for them to collect a rental vehicle in Mthatha, but the overnight storm had included a small tornado that damaged all the rental cars at Mthatha airport. This caused a further delay as a car had to be sent up from East London.

The recovery vehicle was unable to reach the stranded Touareg for three full days due to the severity of the storm and damage to the roads.

The next morning we left for Kob Inn and left the Rankins safely ensconced at the Ocean View Hotel, where the manager kindly took him through later in the day to collect Jim's hire car. The Rankins met us later in the day at Kob Inn for a mini reunion where a goodly deal of wine was consumed.

Next week: The Collywobbles and Bashee River Dam

Hans Merensky (16 March 1871 – 21 October 1952) was a South African geologist, prospector, scientist, conservationist and philanthropist. He discovered the rich deposit of alluvial diamonds at Alexander Bay in Namaqualand, vast platinum and chrome reefs at Lydenburg, Rustenburg and Potgietersrus, which led to some of the largest platinum mines in the world, phosphates and copper at Phalaborwa in the Transvaal lowveld, gold in the Free State and the world's biggest chrome deposit at Jagdlust near Pietersburg. 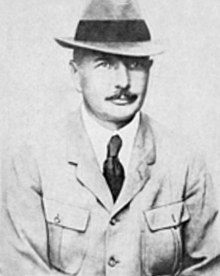 Hans Merensky was born on 16 March 1871 at Berlin Missionary Society station Botshabelo, near Middelburg in Transvaal, where his father, Alexander Merensky (1837–1918), a noted ethnographer and author, was the resident missionary. Keenly interested in minerals and enjoying outdoor living, he studied mining geology after finishing his schooling in Germany. He was awarded a doctorate in mining geology from the University of Charlottenburg in Berlin. He completed his practical training in coal mines in the Saarland and in Silesia and began work for the Department of Mines in East Prussia. In 1904 he came to South Africa to conduct some geological surveys in the Transvaal. He discovered tin near Pretoria and reported to the Premier Diamond Mine regarding possible mining prospects. He worked for several mining companies and Friedlaender & Co. sent him to Madagascar to investigate a reported discovery of gold, which turned out to be false. He resigned from his job in Germany and moved to Johannesburg where he became a successful consulting geologist.

In 1909 he visited the diamond fields of South West Africa and controversially predicted that diamonds would be found along the West coast and south of the Orange River. In 1913 Merensky lost his entire fortune due to the Depression, and was interned at a camp near Pietermaritzburg. During these financially difficult years he enjoyed the support of Sir George Albu.

In 1924 he followed up the discovery of alluvial platinum by A F Lombard on his farm in Lydenburg and discovered its source in the Bushveld Igneous Complex which set him on the road to financial recovery. This deposit came eventually to be known as the Merensky Reef, which contains 75 per cent of the world's known platinum resources.

In 1926 diamonds were found at Alexander Bay and Merensky received £1,250,000 for his prospector's share. He established the Phosphate Development Corporation Ltd. - FOSKOR - to manage the extraction of phosphates at Phalaborwa.

In his final years he lived unostentatiously on his farm Westfalia near Duiwelskloof in Transvaal, where he received local celebrities and foreign dignitaries. He died on 21 October 1952.

The discovery of gold in 1886 saw thousands of prospectors flock to Klerksdorp. Today, Klerksdorp is the centre for a large mining and agricultural economy and boasts the second largest grain co-operative in the world. Attractions include Goudkoppie (the old mining shafts dating back to the 18th century), Klerksdorp Mines, Ou Dorp Hiking Trail. The Railway Station and Old Flag Room which was opened by President Paul Kruger when the line from Krugersdorp reached the town in 1897 - Klerksdorp's first national monument. 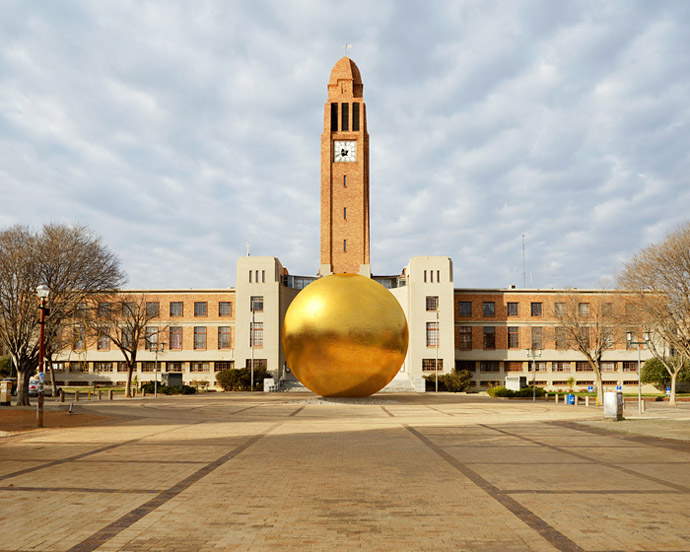 Whatever its current name, Klerksdorp began as a Voortrekker settlement on the banks of the Schoonspruit (clear stream), which flows through the city, in the late 1830s. Klerksdorp’s streets are today lined with historic buildings and sites that bear testament, not only to these brave frontier families who crossed the Vaal River to settle here, but also to the gold rush, which brought thousands of prospectors to the rural settlement.

Klerksdorp is surrounded by loveliness, despite the fact that it today thrives both on mining and agriculture. The Faan Meintjies Nature Reserve is just 13 kilometres outside of the city and well worth a visit. Ideal is to take the ‘ou dorp’ (old town) hiking trail that wends its way through the old part of town, taking in all of the sites of historical reference, including Jack Scott House - an original tin house imported all the way from Britain, although it’s been allowed to degenerate somewhat. And there’s an original distillery that makes an appealing visit too.

If it’s greener vistas you are after, then visit the city’s Plant House, a series of municipal gardens in town, or the Johan Neser Dam, on the Schoonspruit just northwest of the city.

There are very few mountain passes in the Klerksdorp area, but there is one well worth seeking out. Although this six kilometre gravel pass is fairly ordinary and has no particular characteristics to make it stand out above the rest, the roads around it and its location make this a very special pass. It is situated inside the Bergland, a contorted series of hills and mountains that were formed by what was probably the most apocalyptic event ever to befall this earth. Despite the approach roads being mostly gravel, they are usually in a good condition, and this route can be driven in any vehicle, subject to the weather. It is also a great route for adventure motorcyclists.

Words of  fun & wisdom: "A cynic is just a man who found out when he was about 8 that there wasn't any Father Christmas, and he's still upset" ~ James Cozens