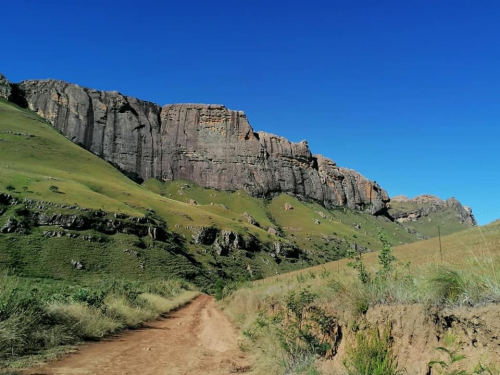 * Passes of the Week

Day 5 - Saving the best for last

Monday 5th April dawned crisp and clear with the convoy ready to roll at 0800 sharp. There was an air of anticipation as this was the final day of the challenge and the infamous Bastervoetpad Pass lay in wait for us. We did our standard 10 km tyre arm-up drill, then turned right off the R58 about halfway to Barkly East, onto a minor gravel road labelled Bottelnek (P2895). This road routes first into the east for a long drive up the Bottelnek Valley, then ascends steeply to the summit of the Bottelnek Pass, which is followed by a moderate descent into the west, where the road later intersects with the R393.

The 5,1 km long pass has an altitude variance of 193 metres to summit at 2204m ASL producing an average gradient of 1:26 with the steepest sections being at 1:5. In wet weather non 4WD vehicles will have traction issues. It snows regularly on this pass during winter and the usual snow-driving cautionaries apply. Although this pass can be driven in a normal sedan, we would rather recommend a high clearance vehicle and definitely a 4x4 in rainy or muddy conditions. Currently this is the pass that replaces the Ben MacDhui Pass until such time that particular situation has resolved itself.

Regardless of which direction you drive this pass, you are in for a visual treat at either end, as the access roads take the traveller through some beautiful Eastern Cape landscapes of swiftly flowing rivers, green grass covered hillsides, towering mountains with spectacular sandstone outcrops in weird and wonderful shapes, with tall poplar trees and evergreens lining the road side. It's as if time has stood still here. The access road can get very muddy during the rainy season so non 4WD vehicles are more likely to get stuck than on the pass itself.

The access road, which is about 9 km long, passes through several farms on its path eastwards, including Redbrook, Rosehill. Sonskyn and finally Singleton. There are some beautiful examples of old sandstone sheds, homes and outbuildings reflecting the austere, but practical Scottish settler influence. Horses, cattle, sheep and goats are frequently found on the roadway but the going is normally slower than 25 kph, which allows ample time to stop timeously. The Bottelnekspruit Valley road also offers some fabulous sandstone formations.

The drive up the valley and the pass presented no problems for any of our group, as we stopped at the summit to enjoy the sunny weather and wide vistas. Challenge pass #9 had just been completed, but Bastervoetpad was waiting.

We gave all the drivers a thorough 4x4 pep talk over the radios as we continued on the gravel road section from the Bottelnek Pass to the start of Bastervoetpad. The approach road through some pleasant farmland almost lulls one into a false sense of security. Suddenly a fairly new concrete culvert style bridge signals the start of the drama.

Bastervoetpad - A minefield for the unwary

Immediately after the bridge, the road takes a rapid turn for the worse, with large embedded rocks, loose stones and little streams of water creating mud. We had everyone change to low range before the western ascent began. Although the road was really rough, no-one had any issues to be overly concerned about and 25 minutes later we were all standing at the summit enjoying what is probably the best view in South Africa from a motorable mountain pass. We had close to perfect weather as guests gazed over the hills and ravines with the towering Drakensberg marching off towards the left in serried ranks of buttresses interspersed with deep green gullies and ravines.

The Bastervoetpad Pass is one of the most challenging true mountain passes in South Africa and it's rated high amongst the Top 10 high altitude passes of the Eastern Cape.  Officially named the Dr. Lapa Munnik Pass, (although no-one uses this name), this rough gravel pass is located between the summit of the Barkly Pass and Ugie and traverses a southern arm of the Drakensberg along the east-west axis. The rugged mountains and deep, green valleys of the southern Drakensberg are strongly reminiscent of the Scottish Highlands, with icy winters and mild summers. This is the only pass in South Africa named after a minister of public health. The route was first discovered in 1862 by Adam Kok lll, when he led an armed group down the footpath as a possible route for his historic trek, but found the locals too hostile. He subsequently led the Griquas in their historic trek from Phillipolis in the Free State to their new home, called of course - Kokstad, over another route further to the east, named Ongeluksnek. (We will be featuring the full story of Adam Kok and the Griquas in our next few newsletters)

The pass boasts a summit height of 2240m, a length of 20 km and it loses 830m of altitude down the Drakensberg escarpment on the eastern side. Add to those rather impressive statistics, this pass can be treacherous in bad weather and is subject to electrical storms, violent winds, heavy rain, hail and snow.

At the summit is a stone plaque dedicating the pass to Dr LAPA Munnik and another a little further to the west, in honour of Nic de Bruin who mapped and built the western section. The plaques date to around 1979, making the current version of the pass approximately 40 years old.

Bastervoetpad summit views / Photo: MPSAOnce we had our fill of the summit views, it was time to start the marathon descent of 13 kilometres of down-hill driving, where 830m of altitude is lost before reaching the eastern foot of the pass. About 3 km from the summit, along the descent there is a chicane section with a particularly tricky exit corner to the left. It's usually muddy and very slippery at this obstacle. To add to the technical difficulties, there is a serious amount of inward camber, which causes vehicles to slide down into the embankment. For most drivers the natural instinct is to drive up as high as possible on the drier part of the corner, but that can very easily turn into a rollover. We took a fair amount of time talking each vehicle down this obstacle one by one,

The tiny, solitary farm dwelling a little further and before one arrives at Sephton's gate, had a wisp of smoke rising from the chimney. During our previous tour the house had been unoccupied. It was great to see the herdsman with his two little children a little further on, where he was driving a pair of donkeys with a good load of firewood in preparation for the next cold winter. We stopped and had a chat with him and handed over some goodies to sustain them for a few days.

We enjoyed a lunch break in the shade of a large stand of black wattle (the Australian curse) under the guardianship of the massive sandstone outcrops on the far side of the ravine. Soon a Land Cruiser bakkie arrived being driven by Bennie and Marjorie Venter, from the Valetta farm at the bottom of the pass. It was great catching up with them again and peak caps were duly exchanged.

The drive out through the PG Bison forests was easy enough and soon we were heading back to Elliot on the tarred R56 and from there up the Barkly Pass with time to spare. We gathered all the interested parties who had missed out on the vulture sightings on day 2 and guided them up the mountain to the Castle and as if it were carefully orchestrated, the vultures were on the wing providing a final fitting farewell for another hugely successful Ben 10 Tour.

The final evening's Chappies Roast is always lots of fun as guests accepted their rewards and punishments in good spirit.

We chat with Mel Gahler of Wild Coast FM about Day 1 of the Ben 10 Eco Challenge V4 Tour.

Passes of the Week

If you have the time you can watch the full video series to make this story come to life via the hyperlinks below.

Tail piece: "Wouldn't it be nice if the wattage of a car's sound system could not exceed the IQ of the driver" ~ Robert Maine