As you read this newsletter we are already based in Matatiele, which is our rendezvous point for the Wild Coast 2021 Tour. The minimum temperatures hover between -1C and 3C at this time of here, so its a cold start to the tour, but by the time we reach Mbotyi at the coast, the maximum/minimum temperatures improve a lot to 23C/14C on average. We base ourselves at Resthaven Guest House for the first 2 days of the tour, where our hosts, Philip & Elrita Rawlins move heaven and earth to ensure our group is comfortable, well fed and happy.

We will be filming Ramatselitso's Pass before the tour starts. This pass has evaded our attentions for almost 8 years and persistently given us the bird mainly due to unsuitable weather. We last drove this pass in 2012 when it was a seriously challenging 4x4 route. Since then the steeper parts have been concrete paved which should make our camera work a lot easier.

The area has had a very wet summer and autumn, so we are expecting plenty of slipping and sliding on this tour as well as a number of bridgeless river crossings to contend with. Our routing tomorrow takes us up to Mountain Lake high above Matatiele as well as a visit to the Mariazell Mission, which is always a big hit with our guests.

On Saturday we say farewell to friendly Matat and head south on gravel via the Nungi Pass and Colonanek both which offer sublime high altitude scenery. We then do a short section on the N2 before turning south to Tabankulu and on to the magnificent Mzintlava Pass, which will be the highlight of the day. We will dodge the taxis, dogs, goats and cattle in Lusikisiki and descend all the way to the coast at Mbotyi, where we will spend two nights and includes a hike to Waterfall Bluff and Cathedral Rock.

Along the mountainous border of Lesotho, between Aliwal North and Barkly East, ran what was arguably the most scenic branch railway line in South Africa. Railway enthusiasts also know the line for the famous set of eight reverses (or switchbacks) that negotiate the difficult terrain of the Witteberge in the southern foothills of the Drakensberg. Although relatively short in length, its overall construction period was unduly long (28 years), spanning from March 1903 to December 1930, and included the puzzling abandonment of an essentially completed and particularly striking section. What circumstances interfered? Because of conflicting explanations, and other questions, a group of five civil engineers visited the disused line during October 2012, seeking answers to their questions. Comprising what came to be known as the 2012 Barkly East Railway Reverses Tour (BERRT), the participants offer these findings, hoping other engineers and enthusiasts will visit this remarkable branch line in a magnificent part of South Africa. 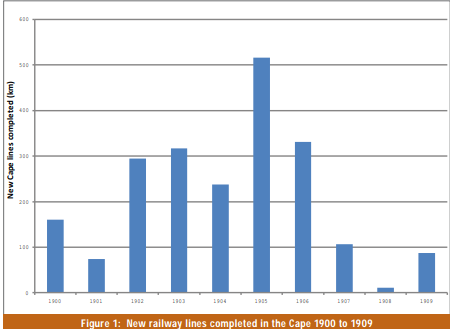 Although only 157 km in length, the line was constructed in four separate sections:

1. Aliwal North to Lady Grey, 64 km, constructed from March 1903 to November 1905. This was a relatively easy section, the only significant obstacle being the first crossing of the Kraai River near Aliwal North.

2. Lady Grey to Motkop, 33 km, April 1910 to December 1913. This section was the most difficult, as the line had to cross the Karringmelkspruit, a deeply incised valley. It is here where six of the eight reverses were eventually built. Motkop comprised an insignificant temporary siding, a terminus necessitated by budget constraints.

3. Motkop to New England, 32 km, August 1914 to December 1915. New England was a more substantial terminus, better accessible by road from Barkly East and the surrounding farming country. This section was easy going without difficult obstacles.

4. New England to Barkly East, 28 km, after a 13 year delay, constructed from November 1928 to December 1930. This section crossed the Kraai River for a second time, and required two more reverses. To the question why construction took so long, a short answer is that each section had to follow a similar, protracted procedure of lobbying, parliamentary authorisation of a desirable “new line”, and then awaiting parliamentary appropriation of the necessary funds (against fierce competition from many rival construction demands and requests). On each occasion insufficient funds were voted to complete the entire branch line – so, to complete the line, a new cycle had to be started. Economic and political conditions in the country also played a role: 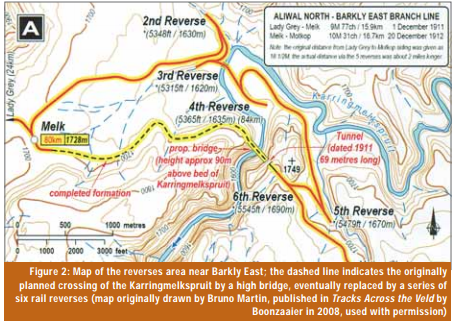 Section 1 was built at a time of national reconstruction following the end of the South African War, when almost every district was clamouring for rail access. Funds were stretched widely.  Cape rail construction tapered off dramatically after 1905, as shown in Figure 1, and the line was implicated.  From about 1906, large capital investment by government, which included new rail construction, was inhibited by the pending unification of South Africa in 1910, holding to the well-established principle that projects could only be approved if “those that have to pay have a voice in the expenditure incurred”.

Section 2 of the branch line was the exception to the rule, as it was started only one month before unification after aggressive lobbying by the Barkly East community, based on the fear that their line would never be approved under a new government covering a much larger area of jurisdiction. Of course, the line was absorbed into the South African Railways (SAR) upon unifi cation.

World War 1 (1914 – 1918) put an automatic stop to rail construction; the SAR had to divert its resources to, amongst other activities, connecting the South African and South West African railways in record time, and transporting troops and war supplies.  Section 4 was authorised in 1925, when serious doubts were raised about the economic viability of branch lines in general. Critical examination of branch line proposals, coupled with difficult economic conditions, obliged a wait of three more years before construction started.

Between Aliwal North and Barkly East the most severe obstacle is presented by the Karringmelkspruit, east of Lady Grey. Tributary to the Kraai River, Karringmelkspruit cuts a deep gorge with steep, boulder-strewn slopes – designing and constructing a railway bridge here would be challenging. Upriver the gorge is less daunting, but the rugged Little Berg of the Drakensberg limits viable crossings to one short reach, a spot used in the 19th century for the old wagon trail, and today by the R58 main road between Lady Grey and Barkly East. 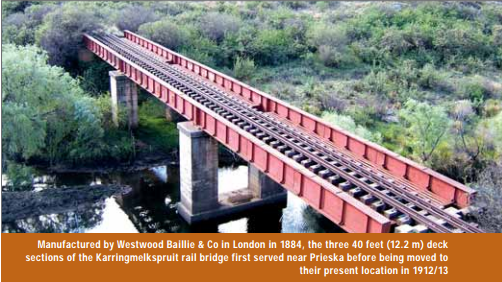 View of the Rail bridge over the Karringmelkspruit

Rail alignment incurs severe geometrical constraints, forcing engineers to consider all possible options. Following a “flying survey” in 1899, probably performed on horseback with primitive surveying instruments (if any), George Schele, reporting his findings to none other than John Brown (soon thereafter the first president of SAICE in 1903), first suggested a route.

His proposal was based on a rail gauge of 2 feet (mensuration at the time, 610 mm today) and would have crossed the Karringmelkspruit on a low bridge at exactly the same point where the rail crosses today. His proposal did not include any reverses, but he admitted that the route “could hardly be selected if the gauge was of standard width” (the standard Cape gauge of 3 feet 6 inches, or 1 067 mm).

Soon thereafter, following a more detailed survey in 1903, resident engineer Allan McDonald Campbell boldly proposed a route that would cross the Karringmelkspruit about 1 000 m further downriver in the gorge, requiring a high bridge 93 m above the river bed. Moreover, at the eastern end of the bridge, the line would immediately enter a tunnel only 70 m long, exiting on a small plateau and continuing in regular fashion. 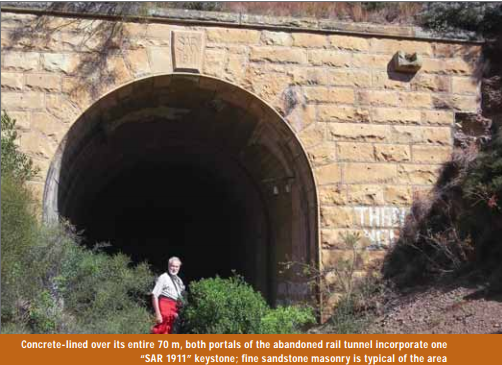 When crews moved onto site in 1910, this proposal, which accommodated the wider gauge, was approved and tunnel construction started forthwith, in parallel with the bridge design. Understandably, the bridge design team (who had to be paid for many hours of overtime) finally came up with a cost estimate significantly higher than that budgeted for. Stringent budget controls imposed by parliament could not be exceeded, so Campbell’s grand design was scrapped and an alternative system of six reverses was hastily constructed.

Three reverses allow the line to descend steeply to cross the Karringmelkspruit at the same low level that Schele had suggested, and via three more reverses to rise again to the plateau immediately east of the tunnel. Substitution of the six reverses to replace the bridge was approved only in November 1911, three months after the tunnel and the approach earthworks for the high-level bridge had been completed in August 1911.

Naturally this led to an embarrassing situation: an expensive, complete, lined railway tunnel, worthless and unusable to this day. Additionally, the rail formation constructed on side-long ground on the western approach to the proposed high-level bridge has left a hillside scar visible to the present. For the first decades following the tunnel construction, it was commonly reported and generally accepted that abandonment of the tunnel and its approach formation ending in a short but deep curved cutting, was caused by an unavoidable shortage of money. 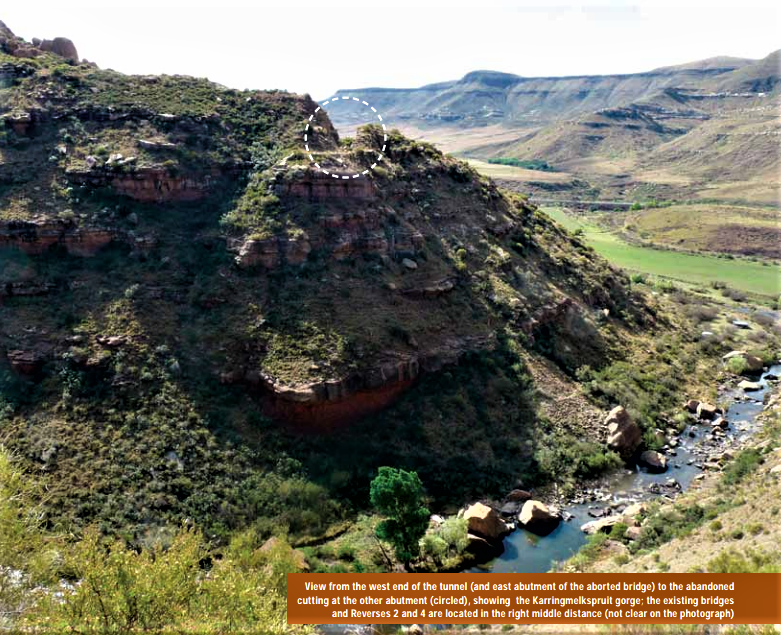 Latterly, however, a number of myths have arisen to explain why the tunnel and formation were abandoned and the bridge design aborted; some are listed below, all easy to disprove by simply considering the timeline:

“During World War 1 a ship loaded with bridge material en route to South Africa was sunk by a German U-boat.” (1978, The Great Steam Trek)

“The ship with the bridge parts sank in a storm on its way from the United Kingdom to South Africa. The reverses were planned all along as a provisional arrangement for the transport of material for track and tunnel construction. As no second bridge could be ordered due to the impending war, the provisional arrangement became permanent.” (From a 1979 report on www.drehscheibe.com)

“The steelwork for the bridge was lost at sea en route from the UK.” (1980, South African Steam Today)

“The steel girders for the bridge were manufactured in England but the ship Mexico, carrying the girders, was sunk during World War 1.” (2011, Heritage Management Strategy and Implementation Plan for Barkly East)

“Two bridges were sent from England and both failed to reach their destination – one was sent back for ammunition during World War 1 and the second sank with the ship that was transporting it.” (From www.zuluportal.com)

Next week we will publish Part 2 of this fascinating story. The full story and photos originate from the May 2013 edition of the magazine "Civil Engineering" and was submitted to us by Allison Sykes.

TAIL PIECE: "A cynic is a man who knows the price of everything, but the value of none" ~ Oscar Wilde