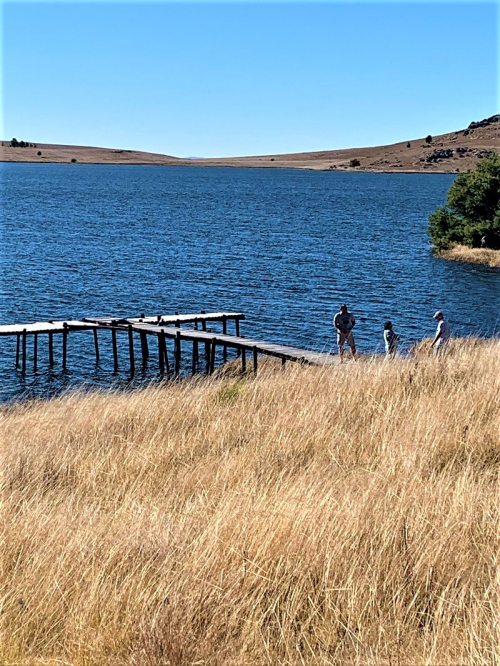 The Week that was

It's something of a culture shock arriving back in a big city with its traffic congestion, sirens and shopping malls after spending two weeks in the Wild Coast. This tour was without doubt our most successful ever, thanks to an exceptionally nice bunch of guests (with some real characters which we will get to a bit later), brilliant weather and hospitable locals. But let's start at the beginning. Our guests ranged from age 51 to 75 (evenly spread between male and female) and included 80% repeat business, which is always a good sign that we are doing most things right, most of the time. Everyone arrived in Matatiele on Thursday, 13th May ready for the big adventure.

Our routing up from Cape Town took us via the R60 via Robertson, Ashton (where that big arched bridge is scheduled to be moved sideways on August 18th), Swellendam, Riversdale - up Garcia's Pass to Ladismith, Calitzdorp, Oudtshoorn, De Rust, Uniondale, Willowmore, Graaff Reinet - over the Wapadsberg Pass arriving in Cradock around 5.30pm where we overnighted at the Victoria Hotel. This must be one of the best hospitality deals in South Africa in large, well appointed and comfortable suites with excellent food to boot. One thing you can rest assured of on this tour is that you will return home at least 2 kg heavier!

The next day, after meeting up with our sweep (Philip Wantling) we drove to Tarkastad (where the roadworks are still static) and on to Queenstown, following the R470 via Lady Frere, Cala, Elliot, Maclear and finally Matatiele where Resthaven Guest House's owners, Elrita and Philip Rawlins were waiting to welcome us. We arrived a day early as the next day we had kept open to film Ramatselito's Pass just north of Matat.

On Wednesday 12th Philip Wantling and I took the Cruiser up to the border post at Rama's Nek (Ramatselitso's Nek) and filmed the big pass with its majestic views and steep gradients in perfect weather. This pass will be produced and indexed onto the MPSA site in the next 10 days.

Once the guests started arriving, it was registration, radio fitments and tyre deflation. We always have one or two people who are reluctant to deflate their tyres and on this tour there were a few non-believers. We never insist on tyre deflation, so those who want to drive on hard tyres have to suffer the consequences of the Transkei roads!

With only 3 vehicles being new to MPSA tours out of the 13, the group gelled very quickly and the Mad Medics from Jhb in their low slung Land Rover Discovery XS, immediately set the tone with zany humour and much giggling and laughter, which would continue throughout the tour. It proved to be infectious as soon the whole group were laughing.

We had a leisurely start of 9 am scheduled for the day. Philip Rawlins rode up front with me in the Cruiser and provided expert local commentary over the radios. We climbed almost 500m in altitude up the mountains to the south of Matatiele with sweeping views over the Drakensberg in the far distance to arrive at Mountain Lake.

This beautiful lake has crystal clear spring fed water and is quite big at 1,6 km long and about 800m wide. The depth is reputed to be about 8m. The waters are only used when the main dam lower down the mountain runs low. Fishing is popular up at the lake but make sure you have a permit. One of the Mad Medics team, Stuart Miller, was quick to strip down and take a dive into the lake, which is chilly at this time of year, but the mad medics were big on swimming as we got to know them throughout the tour.

The descent back to Matatiele went smoothly (a relative term in the Transkei) as we headed off to the Mariazell Mission about 30 km west of Matat. Last year the priest let us down by failing to keep his appointment with us, but this year we had a new priest  who turned out to be much more reliable. His assistant, Lawrence has a bright, friendly disposition and joined us for an extensive tour of the facilities, which included a walk up to the bell tower, where we could get up close and personal to watch the mechanical workings of the 130 year old original Austrian clock that operates on weights and pulleys with lots of grease. 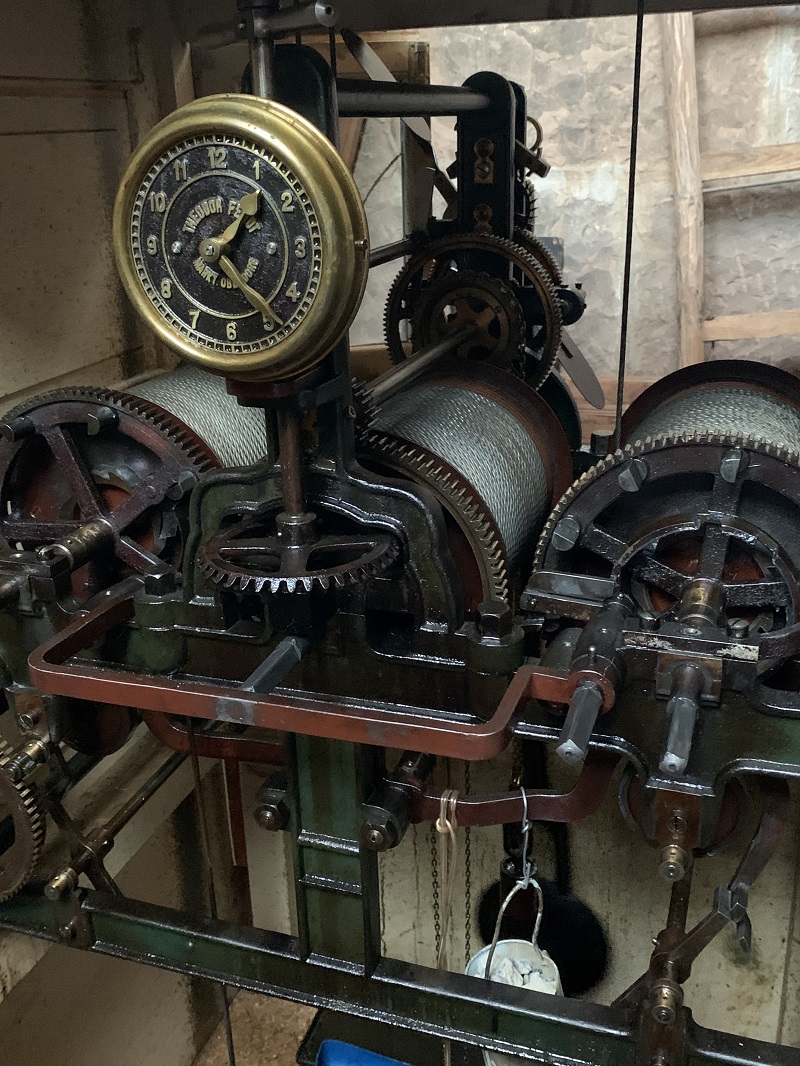 We then visited the cross on the hill and the caves and shrines below it. A short drive got us to the coffer dam with its weir and canal which leads to the hydro-electric plant, where we were taken into the below ground turbines, which produces more than enough electrical power for the whole mission. The visit was completed with a tour of the old blacksmiths shop and the grain storage facility. For some of our guests this was the highlight of the entire tour.

Along the road between Ongeluksnek and Matatiele is basically one large wetland area where a wide range of birds were spotted including crested cranes and secretary birds. Back at Resthaven, Elrita had prepared fillet steaks for us - and they were heavenly. The food is very good at Resthaven.

Day 2 was all about mountain passes interspersed with myths, legends and incredible scenery. We departed Matat at 08.30 on the dot and headed east to Cedarville, where we turned right (south) onto gravel, first driving the little known, but impressive Nungi Pass and then on through the villages at Colona Nek followed by a long descent to cross the Mzimvubu River over a single lane, low level bridge.

With beautiful weather in our favour we enjoyed a short break at the river, before driving on to join the N2 for a short hitch eastwards and then on to Tabankulu. This tar road has lots of deep potholes for the unwary or not so sober! Tabankulu is a busy little town, bustling with taxis, people, livestock and dusty, unkempt streets. Just outside the town a number of damaged homes can be seen on the ridges where a tornado swept throug the area a few years ago, causing havoc with any houses not sturdily built.

The Mzintlava Pass is a major pass and the anchor highlight of the day. The pass has a lot to offer including magnificent views, a large indigenous forest, shady pine and eucalyptus plantations, colourful villages, waterfalls and of course the crossing of the Mzintlava River revives the myth of the Mamlambo (brain sucker) half fish, half crocodile that supposedly killed a number of villagers in the area in the 90's. 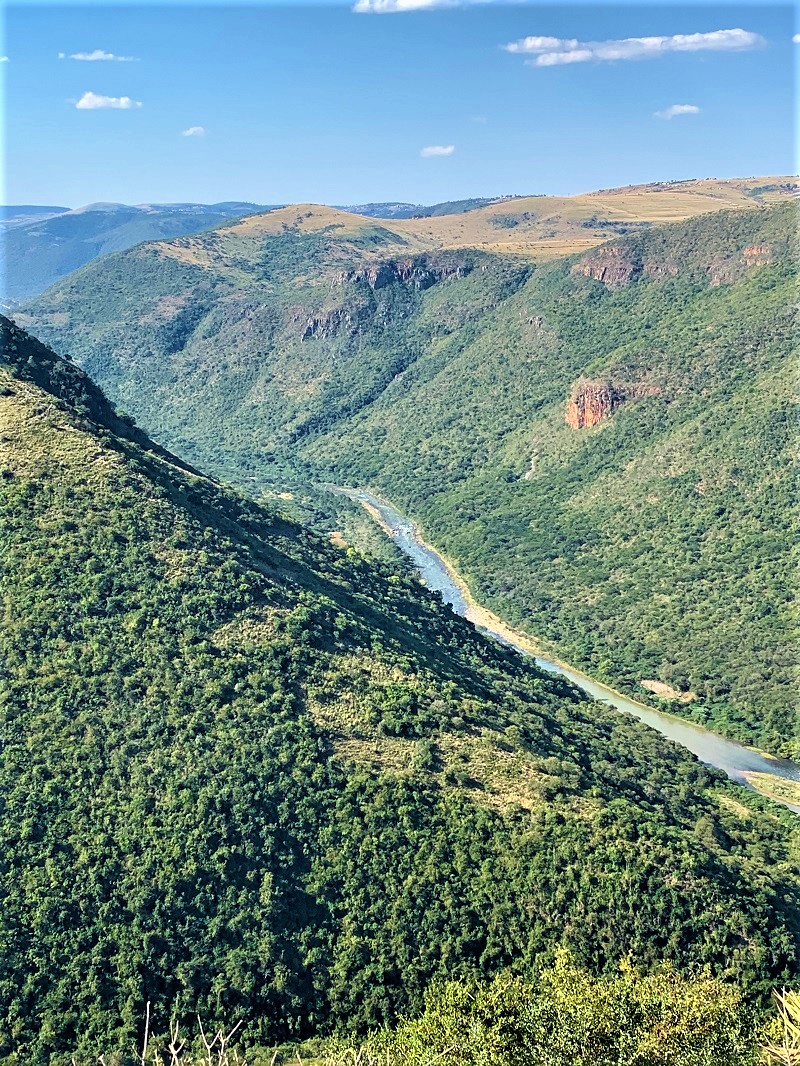 The climb out of the river valley is long and steep, but before long the realities of the main road between Lusikisiki and Flagstaff beckon. Suddenly the dreamy wonders of the Mzintlava Pass are replaced with speed bumps, very slow and very fast traffic, the ubiquitous minibus taxis and the frenetic activity in Lusikisiki.

A short but attractive drive past the Magwa Tea Estate got us to the summit of the Mbotyi Pass which was our final pass of the day. This pass is very steep and has a number of extremely sharp corners. Add in the fact that most of the pass is under the forest canopy, drivers have to be wide awake for oncoming traffic.

We arrived at magical Mbotyi where the staff at Mbotyi River Lodge were waiting to greet us. This is another of our favourite Wild Coast destinations with the thatched bungalows facing either the ocean or the lagoon. The food is good and their pub has amazing views with lots of seating inside and outside on large wooden decks. (And the beer is cold!)

Sleep came quickly to the soothing sound of waves breaking on the beach.

Next week we will cover days 3 and 4 of this tour. Until then, plan your trip with or without us. This is the real South Africa!