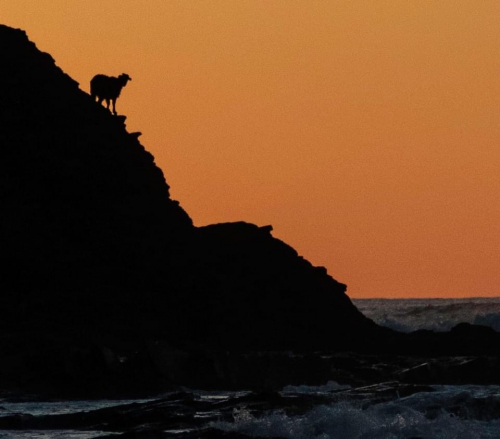 * Winter has arrived with a wham!

Winter has arrived right on schedule with good snowfalls over the Drakensberg, Lesotho and as far south as the Swartberg. Temperatures have plummeted and heavy rains have fallen along the Wild Coast - in some places more than 200mm in 48 hours. It would seem the weather gods smiled on us as our Wild Coast Tour slotted in between two rainy spells, providing us with 10 clear, sunny days. It pays to be connected!

Part of doing these off the beaten track tours is dealing with bad weather, road hazards, mud and dust. Although we had sublime weather, some of the roads had that talcum powder like dust that hangs in the air for ages, and more so if there is no wind. It's a small price to pay for one of the best adventure tours available in South Africa.

Day 3 dawned sunny, but with a fresh south westerly breeze. This was the day we were scheduled to forsake the joys and comforts of our 4x4's and climb aboard Shank's Pony for a healthy hike to Waterfall Bluff and Cathedral Rock. First we had to drive the two hour loop from Mbotyi to Lupathana where the hike begins. This is the shorter of the 2 options, with the longer being directly from Mbotyi up the coast to the waterfall - a 14 km hike one way!

The drive to Lupathana is in itself something of an adventure and it was on this road that one of the Suzuki Jimnys chose the wrong driving line and ended up getting stuck - good and solid. With the help of Jeff Ashbolt and Rodney Buchan, the little Jimny was soon recovered, with only the driver's ego being a little dented.

We use a local guide (Armstrong) to guide the group for the day for two reasons. It puts some cash flow back into the local economy and feeds one extended family for more than 2 months. Adding a local guide to the mix, is also most enjoyable for our guests who appreciate the genuine warmth and friendliness of the locals as well his intimate knowledge of the area. Armstrong is a wiry little guy, but man, is he strong! He has a handshake like a vice-grip. He is also a provincial level fisherman and offers guided fishing trips. He supplements his income by selling his catches to the local hotels, lodges and guest houses as well as own consumption.

We had advised our guests to bring lotions or sprays for the tiny pepper ticks which are prolific along this coastline. Despite precautions having taken, at the time of publishing this newsletter no less than six of our guests have contracted tick bite fever, which only manifested itself some 10 to 14 days after the tour ended. The illness is easily treated with an antibiotic called Doxycycline. Next time we will take more spray and apply more vigorously! Interestingly, we had zero cases during our November tour along the identical route, so it must be a seasonal thing. It was noticable that our guides always wore long pants. Maybe the secret lies there? 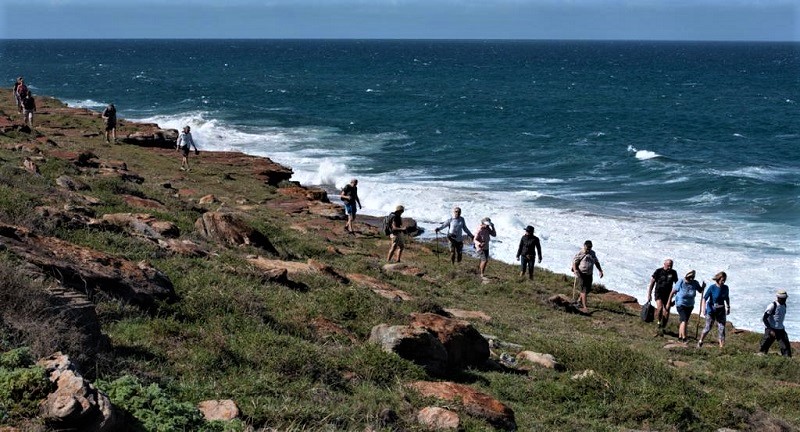 The walk took place in cool, windy conditions, as the group enjoyed the true rugged nature of the Wild Coast. Waterfall Bluff never disappoints. The blustery wind was whipping the spray of the falls upward in a beautiful natural display of the elements. After the waterfall, the track zig-zags up the mountain and over the river that feeds the waterfall and from there on to one of the most photogenic stacks in the world - Cathedral Rock. It is perhaps the fact that one has to walk long and hard to get to the spot that adds to the sense of achievement and exhilaration.

It turned into a long day with the group only arriving back at Mbotyi after dark. Hot showers, clean clothes and a cold beer or a glass of good Cape wine soon had everyone relaxed enjoying another marvellous meal laid on for us. We were pleasantly surprised to find that a large hiking group were also at the lodge for the night, making it almost 100% full. This is good for tourism and a much better scenario than what we saw last November.

Sleep came swiftly to the weary hikers as the surf crashed on the nearby beach. 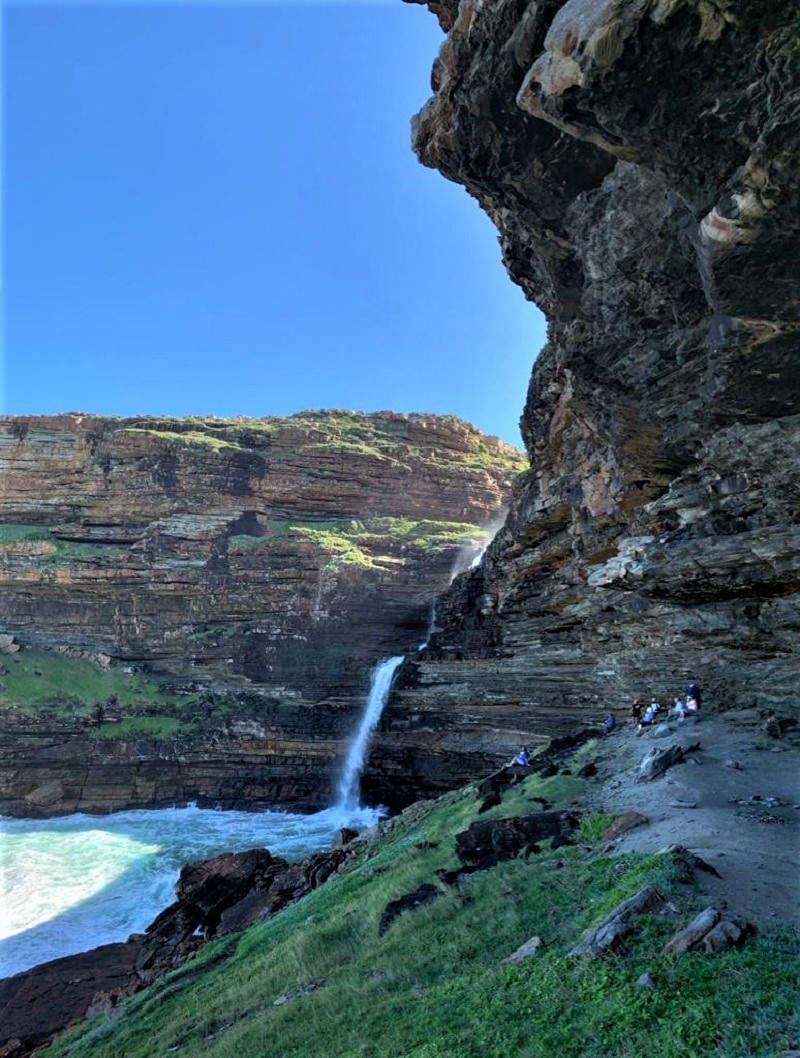 Day 4: The Day of the Waterfalls

An easy driving day was scheduled for our 4th day, but with many points of interest to look forward to. We departed Mbotyi River Lodge at 0900 and with Armstrong still with us (hitching a ride in our sweep vehicle to get to Lusikisiki) we headed back up the Mbotyi Pass for the third time in 48 hours. Near the top of the pass, a small sign shows the way to Fraser Falls. The bumpy two spoor track is only about 1.5 km in length then peters out at a point that seems to offer no view of any waterfall. It requires a short walk down the slope and suddenly a dramatically steep and well wooded gorge appears. Off to the left where a solid basalt sill forms the lip of the waterfall, Fraser Falls can be seen with the naked eye, but a pair of binoculars is a much better viewing option. 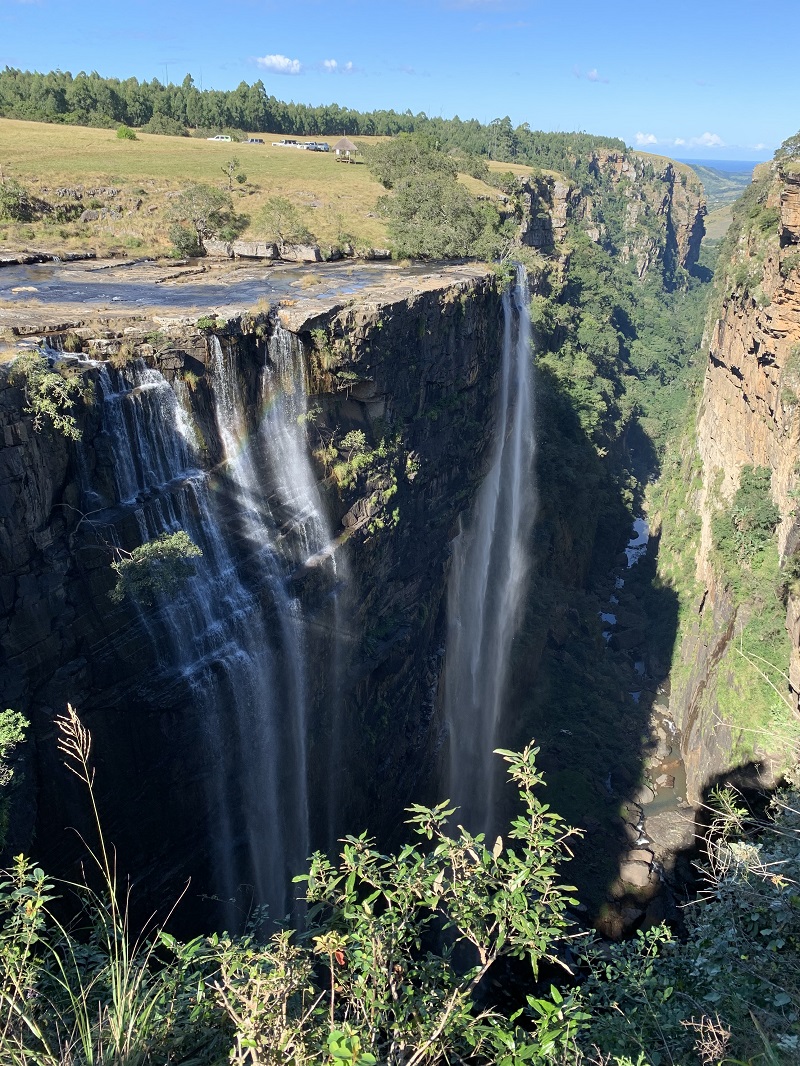 The river has carved a vertical slice right down through the sandstone and forms a spout where the water tumbles down into the ravine far below. This waterfall must be spectacular to see when in flood.

On we went towards Magwa Tea Estate where we turned right to view Angel Falls. This smaller waterfall is on the same river as Fraser Falls, but a little further upstream, where the gorge is much smaller, but the waterfall is nice and close for good photographs. Both of these waterfalls are well worth a visit. Angel Falls is/are very close to the road - perhaps 150m max.

The big attraction for the day was a visit to Magwa Falls. During our November tour, the visibility was very poor from mountain mists, so none of our guests got a decent view of them, but this time we had fabulous weather, plus the river flow was normal, making it fairly easy to rock hop across the river upstream of the falls. A group of 5 trainee sangomas appeared out of the bush not making eye contact with us and settled down at the river to meditate and check their plants and herbs that they had gathered. According to Armstrong the trainees are chosen by the community as suitable sangoma material and more so if they have had "visions" or premonitions. 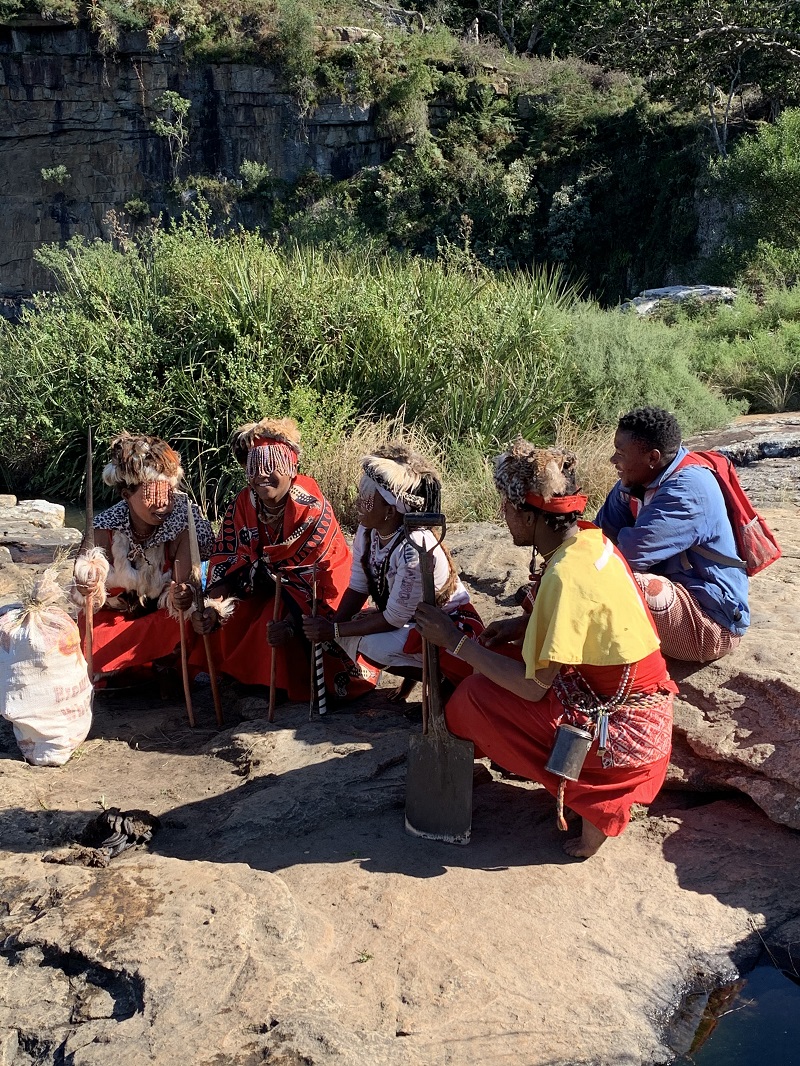 Magwa Falls was simply magnificent. Far below at the bottom of the 142m deep near vertical gorge, a car wreck can still be seen. It dates back to many years ago and no-one seems to know the back story on that one. About two months ago a local man drove his car over the cliff in an apparent act of suicide after murdering his wife. We were unable to get a view of that wreck. Grizzly story, but true.

After countless photos and videos were taken, we all returned to our vehicles and after dropping Armstrong off in Lusikisiki, most of the guests filled up fuel tanks, before we tackled the three back to back passes down the R61 to Port St Johns. Those are the Ntafufu Pass, Nkodusweni Pass and Umzimvubu Pass. If you are prone to car sickness this road will do the trick!

It's certainly not a relaxing, scenic drive as the traffic is bizarre with many crazy speed bumps (like you've never seen anywhere else in South Africa), coupled with 'mad as a hatter' truck drivers and courier van drivers that drive at break-neck speeds, often completely ignoring barrier lines. This is interspersed with old 'skedonk' cars that amble along at 10 kph blissfully unaware of any traffic behind them. Then there are school kids, cattle, goats, sheep, pigs, donkeys and dogs that add another element to Transkei driving. But it's still better than sitting on a grid-locked N1!

After crossing the Umzimvubu River via the White Bridge, we took a right turn and headed towards Mthatha via the Isinuka Poort, where there are caves and sulphur springs (not stoppping due to time constraints), but continued on over the lovely new Butyabuse Pass with its impressive new overpass bridges, where we turned off towards the Mngazi River mouth. This road, which is in a very poor state, is currently being rebuilt. We had to contend with road graders, rollers and some very large trucks before we arrived at the estuary, which is in a most picturesque setting.

We stopped for a lunch break here and once again the Jhb Mad Medics were into their cozzies (well, not all of them) for a swim, much to the amusement of the local Xhosa ladies, who were in hysterics about the naked mlungu thrashing about in knee deep water.

We then took some beautiful back roads through many villages with incredible views over the rolling hills, deep valleys with the ocean always present on the right. We passed a military base near the PSJ Airport Road, where the very professional officers asked us to complete a few forms before driving up to the top of Mount Thesiger, where a spectacular mountain-top airstrip lies unused, but it's still in good condition. After some sunset pics of the Gates of St John and our lodge way down below next to the river, we organised some informal drag races, which was great fun and not to be taken seriously. We made sure the direction of travel was away from the cliffs!! (It was fun watching the faces of the military officers each receiving an MPSA Chappies)

The final pass of the day was the full descent of the Port St Johns Airport Road, before trying to drive through the hustle and bustle of the town itself where yours truly led the convoy the wrong way down a one way street, much to the chagrin of the local drivers. The less said about Port St Johns, the better. It's a mess. There are plans afoot to revamp the entire town into a modern holiday mecca. Let's hope it happens sooner rather than later. Drugs and alcohol on the beaches littered with broken glass and a disinterested police station, has turned most tourists away. If you do plan on visiting, book in at one of the secure lodges out of town. Our destination was the Port St Johns River Lodge, which was perfect, peaceful and quiet.

Toleni Pass - A tarred pass close to the Kei Cuttings on the N2 in the Eastern Cape.

Tail Piece: "Be nice to people on your way up, because you'll meet them again on your way down" ~ Wilson Mizner