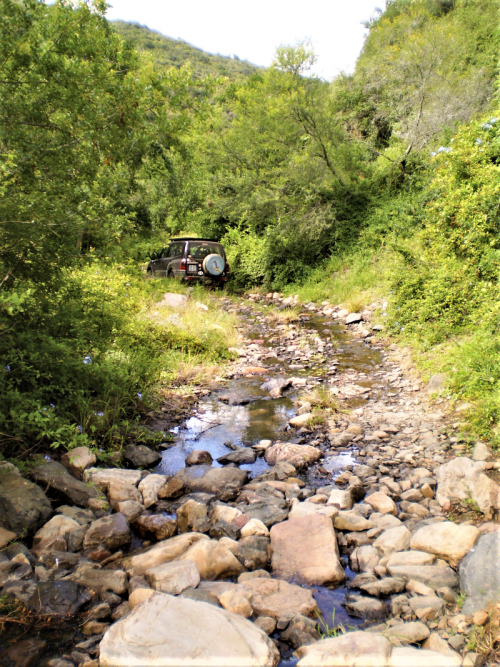 There are a number of riverbed crossings on the Bedrogfontein Route - Photo: SA 4x4

The next tour coming up is the Bedrogfontein Tour from July 3rd to 6th. A three day expedition over some of the most spectacular and tricky gravel passes in the Addo area, including the Zuurberg Pass, Doringnek Pass, Paardepoort and the Bedrogfontein Pass and 4x4 route where Oom Jannie Smuts gave the British a good lesson in bush warfare during the Battle of Bedrogfontein. There is still one spot open. Bookings close this Friday.

The next Wild Coast Tour (Nov 10th to 20th) is fully booked.

We are holding back on tours scheduled for August until we know which way the Covid 3 land lies.

The contractor (Baseline) doing the upgrading work on the historical Bain's Kloof Pass, have hit a number of snags, which will result in the previous reopening date of November 2021, being rescheduled to March 2022. During the Christmas break, the pass will be opened to the general public from Dec 17th 2021 to Jan 5th 2022. So if you've been missing a drive over the old pass, head out that way over the Christmas holidays. In the meantime, you can always take a cyber drive of the pass here:
Bain's Kloof Pass.

Our second last day of the tour dawned calm and sunny making for perfect conditions for vulture spotting. A visit to the vulture colony at Cobbywobbles is always a very popular part of the itinerary, but it can be a long day, so we requested an earlier start and had the convoy on the road by 08h30.

Before long we were in Willowvale where some of the vehicles needed to refuel. Our routing followed the R349 down the Shixini River Valley. This has always been a typical Transkei minor road of little economic importance, but some major roadworks are currently underway rebuilding this road into what looks like, will be a major tarred road. But why - and where does it go to? Careful studies of the maps show no possible reason for such a major expense. However, it will most certainly make the journey from Willowvale to Collywobbles a lot faster than it currently is.

The going was slow negotiating all the stop-go's and detours around the new roadworks as we saw some impressive new bridges under construction. Our route headed NNE as we dropped down into the beautiful Nqabara River Valley, before climbing up some very steep hills with incredible views, as we steadily made progress towards Collywobbles. 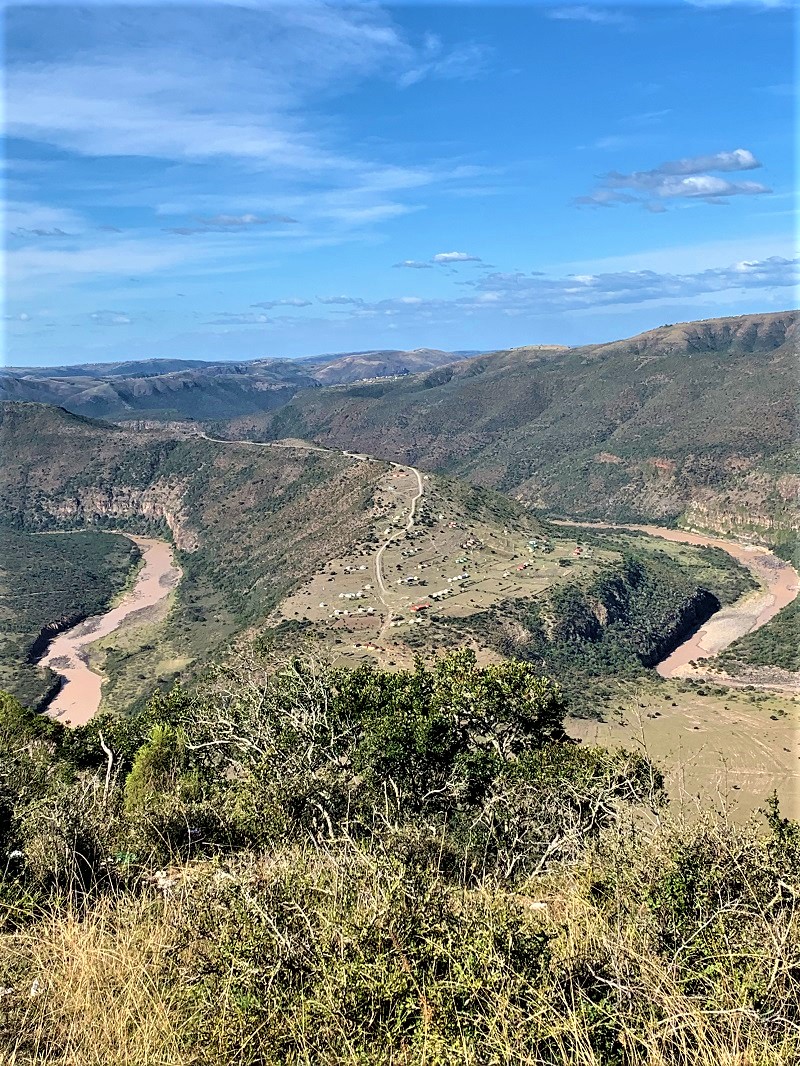 Descending to our lunch stop on the banks of the mighty Mbashe River / Photo: MPSA Tour Group

First we took a spine road that followed a long ridge into the east offering amazing views over the Collywobbles. It's a large area and can be viewed from many different vantage points. Our 'secret' road worms its way very steeply all the way down to the river's edge (Mbashe River), where we took a break on a nice, level, grassy bank right next to the river in sunny, but windy weather. A lone villager from one the houses on the far bank, took the trouble to wade across the river (it's a good 150m wide at that point) to see if he could get some food. His marketing exercise was bountiful as he returned home with armfuls of food and fruit from our group.

After lunch it was a question of retracing our way back up the ridge and following the road down to the Mbashe Dam. About halfway down the descent, there's a fork, where we turned right and headed for the official Collywobbles vulture hide. The road follows the contour line of a steeply sloping mountain, where the Mbashe carves its brown path in serpentine like curves towards the coast. This road is worth driving even if you have no interest in vultures as the views are spectacular, dipping in and out of ravines and dense indigenous forests. 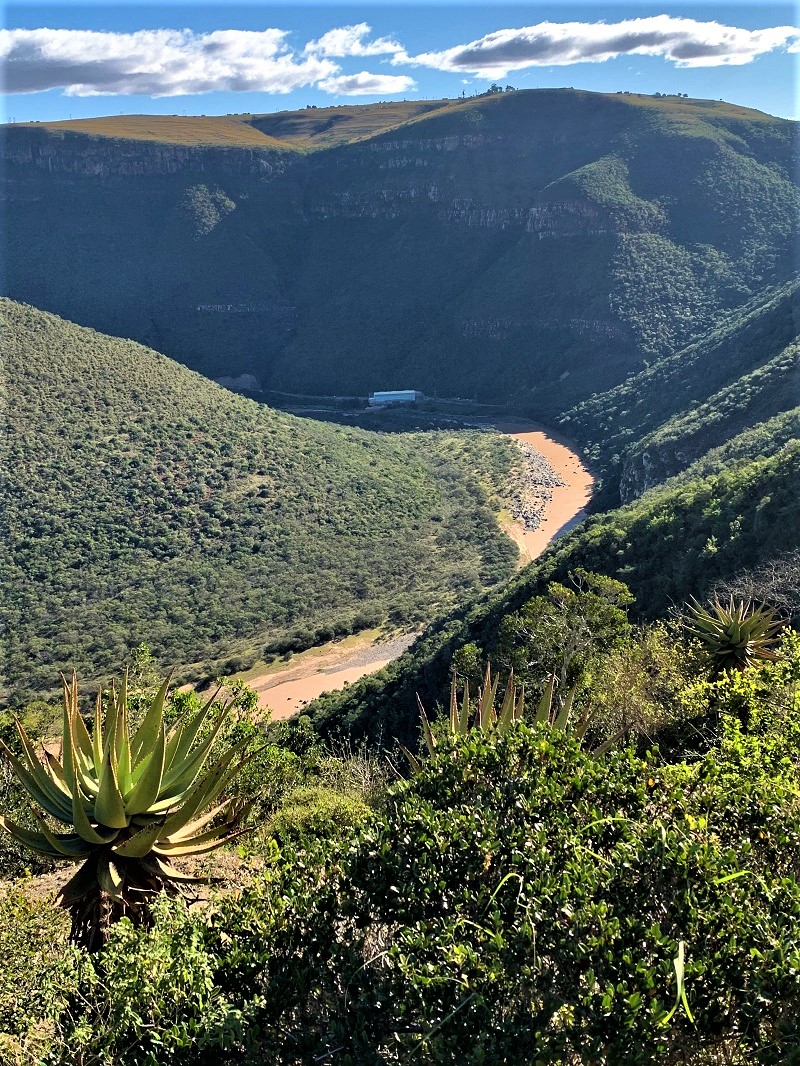 This road is narrow - only just wide enough for a single vehicle. Halfway to the bird hide, the radio crackled: "Wild Coast group. This is Nic. I have a puncture"

That meant doing a puncture repair on that narrow road, but at least there was no other traffic and the gradient was fairly level. Twenty minutes later the rear half of the convoy joined the rest of the group and enjoyed a leisurely half hour watching the Cape Griffin vultures soaring the cliffs of Collywobbles. Some of the birds flew past our group virtually at head height. It is truly a remarkable experience. One can hear the wind hissing over their wings as they fly effortlessly with just a twitch of a wing-tip or tail feathers, gaining hundreds of metres of height over a very short time span. 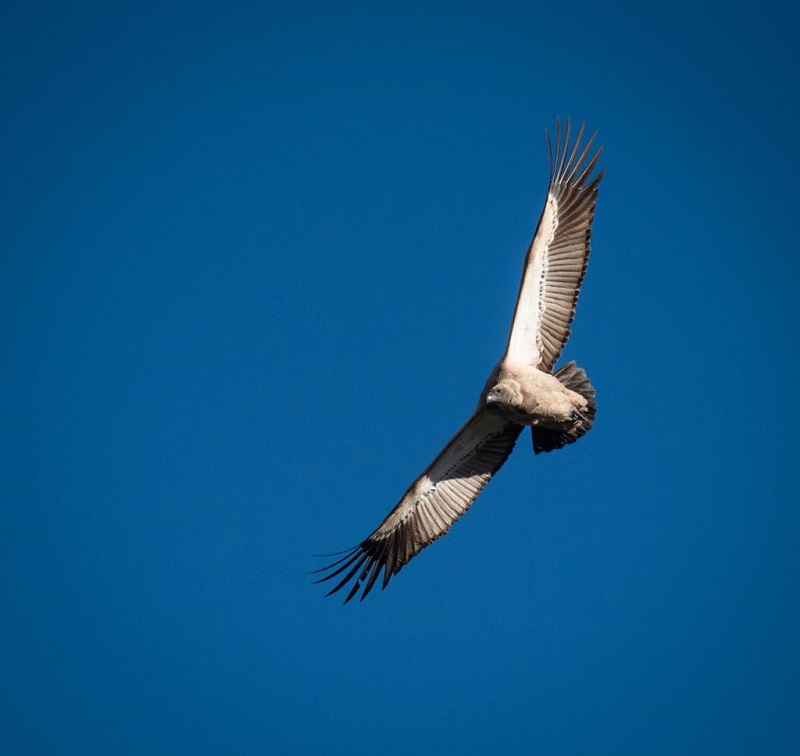 Next up we needed to turn the 13 car convoy around as the road is a dead end. This was no mean feat and for once the convoy driving order was relaxed as we made our way back to the main intersection in the reverse order. It wasn't 15 minutes and Nic got his 3rd puncture. With other guests helping, the tyre was temporarily plugged as our convoy tackled the long descent to the Mbashe Dam. Near the bottom we passed a Hilux bakkie that was literally falling apart at the seams, where the plastic parts of the nose and bumper had started shearing off from all the vibrations on the rough local roads. The owner had carefully stitched the broken parts together using wire, adding meaning to the local custom of not wasting anything.

The main purpose of the dam is to generate hydro-electric power. This time there were no guards in evidence. The crossing of the dam wall is via a very narrow elevated bridge, with a set of width marker poles at either end. If any part of your vehicle touches the poles, you won't make it across! 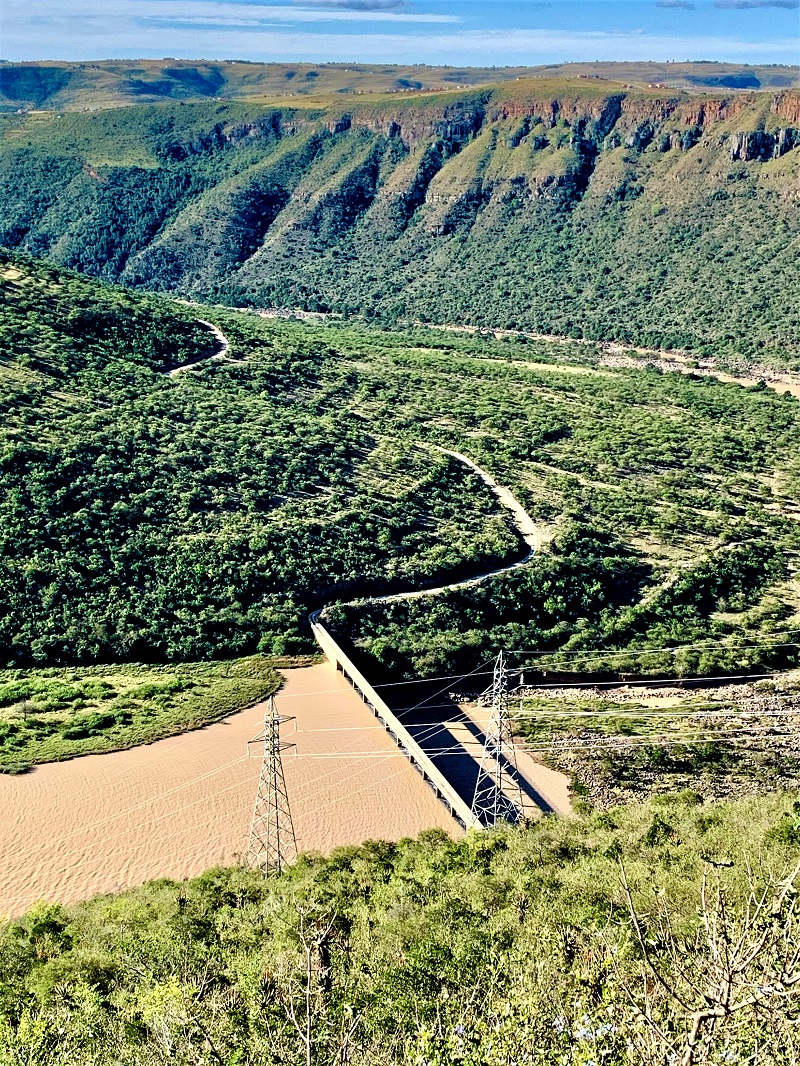 Soon our convoy had successfully completed the bridge crossing over a 100% full and overflowing dam wall. The dam wall is only 20m high and is not used for irrigation - only hydro-electricity. The climb up the far side of the valley is long and steep, but the views are magnificent. All the stops had eaten into our ETA and before long the punctures started all over again. Nic's low profile tyres on his Range Rover were taking a hiding. There were 6 punctures on this one day alone. By the time we reached the N2 near Idutywa, it was already getting dark and we were faced with the prospect of having to drive all the way back to Kob Inn in pitch darkness. Thank goodness for the two way radios which helped keeping everyone in contact and in high spirits.

We arrived back at Kob Inn after 7.30 pm with heavy thirsts and good appetites. Another great dinner was served by the hotel and it was a weary but happy bunch of travellers that slept soundly that night as the surf washed the rocks just metres from our rooms.

Our pass featured pass this week is short but exceptionally scenic and fits perfectly into our Wild Coast report as it's not far from Kob Inn and Mazeppa Bay.

Tail Piece: "Initiative is doing the right thing without being told" ~ Elbert Hubbard