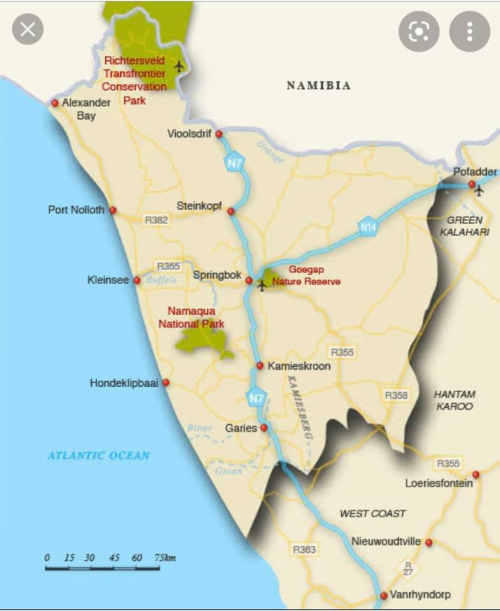 Nearer the sea the river on which the town is situated is still called Groen-rivier. At one time the village was unofficially named Genisdal in honour of Evert Genis, a schoolteacher of a century ago, but for some reason this name did not survive. 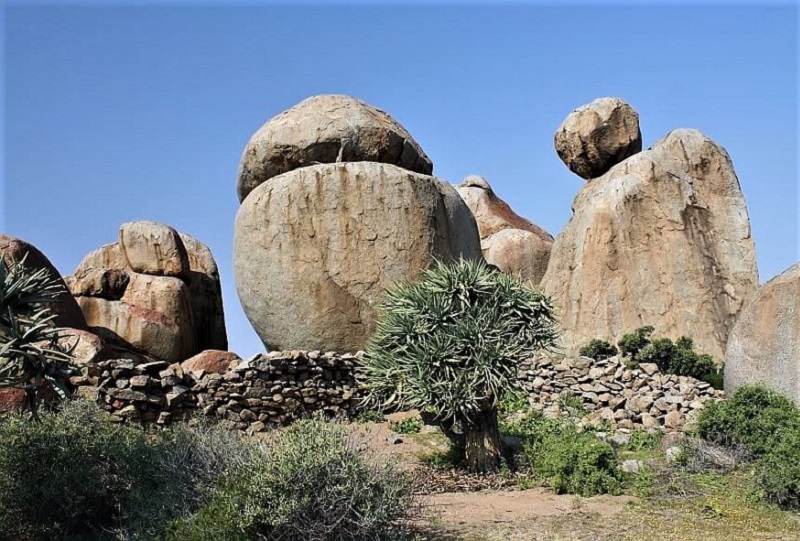 Letterklip is a must visit POI close to Garies / Photo: Mapio.net

From Garies we head north-west to the sleepy fishing village of Hondeklipbaai. This village was originally used as a harbour to export copper ore from the mines around Springbok but was later surpassed by Port Nolloth, which had a safer harbour as well as a railway line. 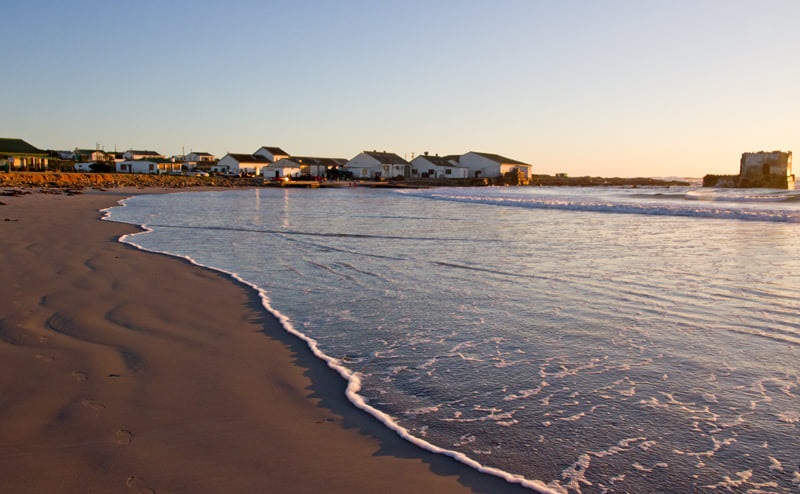 Today Hondeklip Bay is a popular regional holiday destination and serves the fishing and diamond-mining community. Holiday accommodation ranges from camping at the municipal caravan park to self-catering chalets at the Honnehokke Resort.

Attractions include ship wrecks like the Jahleel and the Aristea which ran aground in 2003 and 1945 respectively. In July 2016, the Jahleel started breaking up and split in two. The mouth of the Spoeg River is located about 18 km SSE down the coast from Hondeklip Bay. There are caves of archaeological interest there.

From Hondeklipbaai our route heads north-east to the centre of Namaqualand - The Namaqua National Park. It's an easy 5 hour drive from Cape Town on the N7 national road. After passing through Garies turn right off of the N7 towards Kamieskroon and then pass under the N7 turning on to a gravel road for the final 17 kilometres of the drive. There is a limited 5 kilometre circular flower viewing route available for sedan vehicles to explore and an additional 27 kilometre route for 4X4 and high clearance vehicles.

Adventure seeking 4X4 drivers also have access to a larger 220 kilometre off-road trail. A bright and colourful blanket of orange and yellow flowers undulating across the landscape as far as the eye can see is a breath-taking sight and a definite highlight of a springtime visit to the nature reserve. Known for its spectacular scenery especially in the mountainous section located in the eastern regions of the park, the Namaqua National Park is considered to be the most well-preserved section of Namaqua coastline. 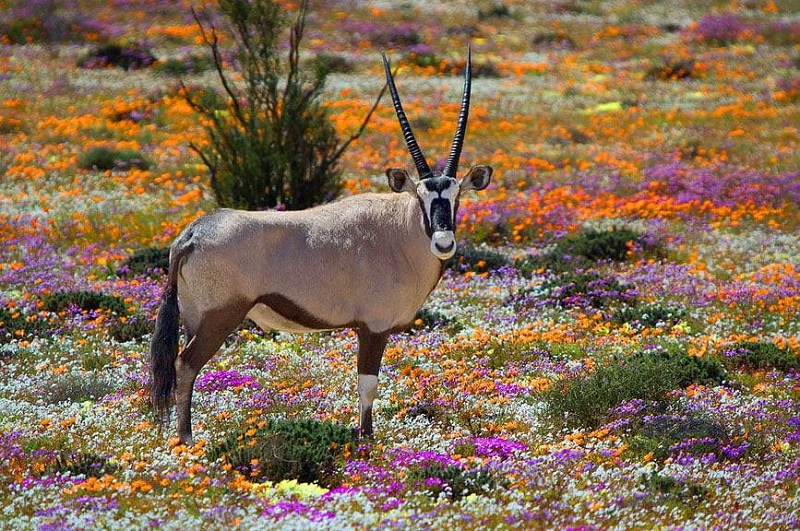 A magnificent Gemsbok (Oryx) posing amongst the wildflowers

Weekend visitors will find the nature reserve the perfect place to spend a few days resting and relaxing, taking in their surroundings and enjoying the sense of peace and tranquillity found here. There are no fuel supplies within the reserve and the closest location to refuel is Springbok, 87 kilometres from the park. Visitors, especially those exploring the 4X4 routes are advised to refuel prior to entering the nature reserve. There are only limited ablution facilities in the nature park, located near to the entrance gate. Tourists are asked to please not pick the flowers or remove any of the plants in the reserve.

Many wonderful gravel passes to choose from

Namaqualand offers a surprising number of gravel passes. We list them here (for the area using Garies and Kamieskroon as a base). You can use the hyperlinks and explore any or all of them:

There are some enjoyable tarred passes as well:

Next week we will conclude this feature on Namaqualand where we will cover the northern parks and passes. 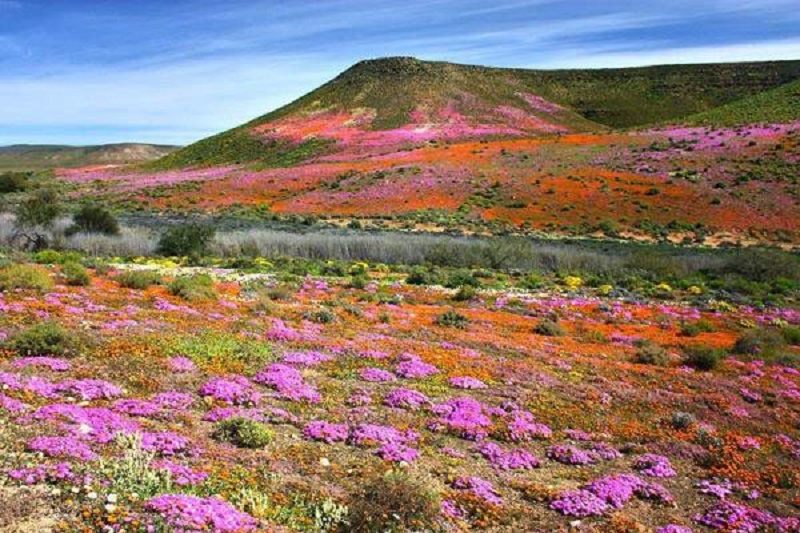 Near the Groenkloof Pass / Photo: MPSA

It was time to say farewell to the good folk at Kob Inn as our convoy rumbled away from the coast and on to Willowvale - a road we were all now quite familiar with, to the point of giving our favourite Nguni's nicknames like Daisy and Myrtle. On the final haul up to Willowvale we overtook a slow moving Toyota Avanza with an odd name on the sides: "Mr. Sorry" We later established it was a hearse. They take their funerals very seriously on the Wild Coast!

The drive through to Kei Mouth was pleasant and without any issues as we drove the Qora River Pass, Cats Pass and finally the Kobonqaba Pass, before arriving at the Kei River Mouth. The river is 340m wide here and the traffic is managed by three ferries, which operate depending on traffic volume. The fee per vehicle was R100 and each ferry can handle two vehicles. Usually there are pedestrians, bicycles, motorcycles and even livestock - each mode being charged a specific fee. 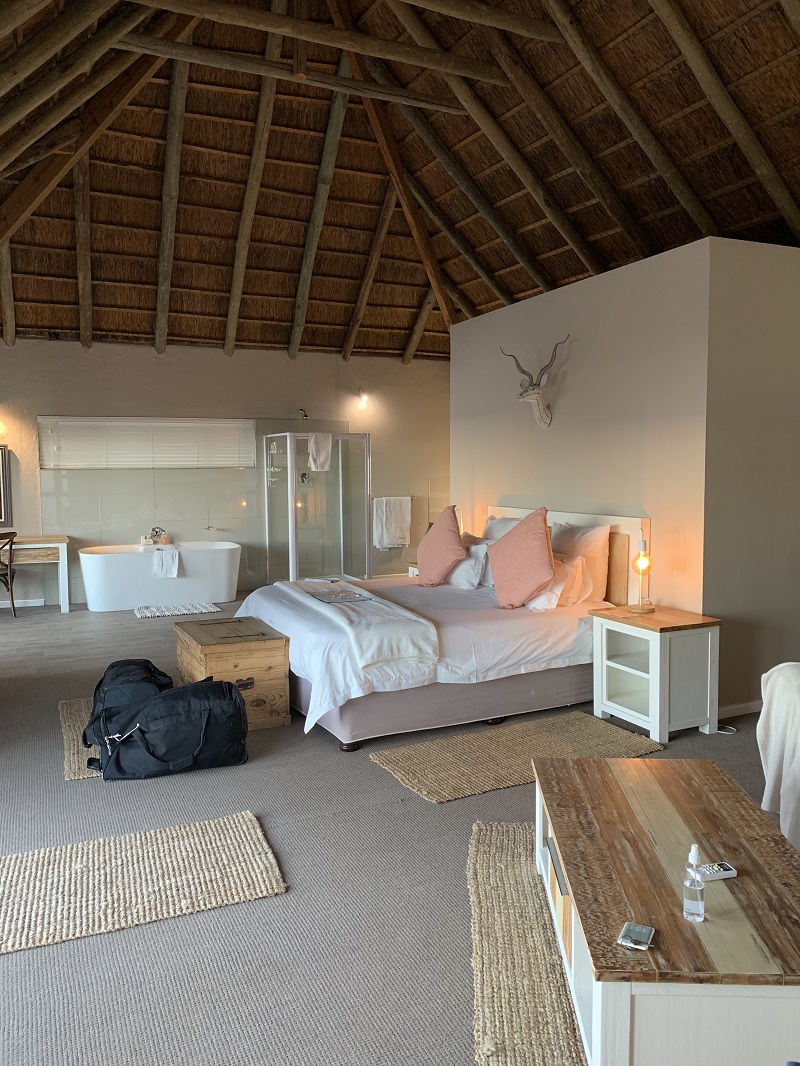 It took a good 35 minutes to get all our vehicles to western side. That was thirsty work, so we took a short lunch break at the Bush Pig Pub, then tackled the rest of the journey to our final destination of Crawford's Beach Cottages in Chintsa East. We had heard very good reports about this venue and booked it as Trennerys (our usual final night venue) was fully booked with a big wedding.

There is nothing I can say except WOW! What a beautiful venue with first class service and outstanding food. Some of our guests were so delighted, they booked an extra day. It was perfection and a fitting way to end our tour with a seafood extravaganza of note. The oysters were massive and some of the biggest I've ever seen. Crawford's will be our new final night destination. All this good food and wine laid the foundation for a wonderful Chappies Awards, where poems and songs were sung heartily, to some indulgently raised eyebrows from other guests.

And so ended what was undeniably our finest tour to date with very happy guests, all of whom have bonded into the extended MPSA family. Our next Wild Coast Tour set for mid November is already fully booked, but you can put your name down on a waiting list in vase of a cancellation.

We met Ed and Marilyn Johnson from Gonubie, near East London, about 4 years ago on our inaugural Swartberg Tour, where Ed brought his guitar along and entertained our group with really good music. More tours followed resulting in Ed being our on the spot music man. Many of our clients become personal friends, as was the case with Ed and Marilyn. The couple contracted COVID a few weeks ago and ended up in ICU. The virus took Ed's life as he passed away last Friday. Marilyn is still in hospital and recovering slowly. Our sincere condolences to Marilyn and the extended Johnson family. The world is poorer for his passing. Rest in peace good friend, fellow musician, humanitarian, father, grandfather and husband.

Voetpadkloof (R323) - An easy, but scenic poort located along the R323 between Riversdale and Ladismith.

Pretzel Logic: "Why do we press harder on the remote control when we know the batteries are flat?"