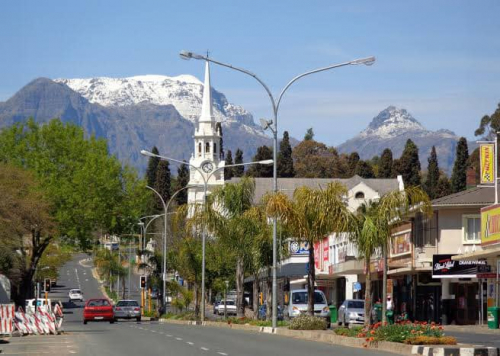 Exactly as we forecast in last week's newsletter, the cleaning up, restoration of calm, law and order is swiftly falling into place and by this Sunday, it is feasible that lockdown restrictions will be eased nationally and especially for Gauteng. It's been an extraordinary time in South Africa and one that I hope we will never see again.

The picturesque town of Wellington is a scenic 45-minute drive from Cape Town and 15-minutes’ from neighbouring Paarl. Wellington’s agricultural economy is centred on its award-winning wines, table grapes, deciduous fruit and it is also home to South Africa’s sole whisky producer.

The region is renowned for beautiful Cape Dutch homesteads, picturesque environment, gardens and wineries. The historic Bain’s Kloof Pass, with unsurpassed vistas, indigenous flora and fauna and crystal-clear streams and rivers, is the perfect spot for hikers and fly-fishermen. The pass, built by the famous Scot, Andrew Geddes Bain, was the sole gateway to the north, before Du Toitskloof Pass was built.

Closer to town, guided wine-walks and horse-trails through rich farmland and flowering fynbos offer the opportunity to see and experience Mother Nature at her finest. The Berg River flows along the western border with two smaller streams, the Spruit and Kromme and the towering Hawequa Mountains stand guard on the eastern side. Wellington is surrounded by fruit orchards, wine estates, buchu plantations and olive groves. In addition, its vine-cutting nurseries produce approximately 85% of the country’s vine root stock for the wine industry.

More French Huguenots settled here than anywhere else in the Cape and the valley was formerly known as Val du Charron. Visit the Wellington Museum with its diverse cultural exhibits, and learn more about the region’s history. The town was renowned as an important academic centre for theological studies and the Seminary gave rise to present-day Huguenot High School and the Huguenot Teachers Training College. Other educational institutions include Boland College and the Cape Peninsula University of Technology. Situated to the north of Wellington, the villages of Saron (originally a mission station), Gouda and Hermon are spread out amid rich farmlands, in the shadow of the Elandskloof and Winterhoek Mountains.

Tuesday 6th July - After a decent breakfast we left the charms of Prince Albert for the lofty heights and sights of the timeless Swartberg Pass. Making a fairly early start we saw very little tourist traffic on the pass. Our goal was to refurbish not only the MPSA summit board on the pass but some of the state signs as well.

After clearing those gorgeous switchbacks up Mullerskloof, we arrived at the Gamkaskloof turn-off, where the outside temperature was 3C. My heart sank when I looked at the level of vandalism on the sign. (Photos lower down). The weather was crisp and cool providing the right ingredients for some hard work. The main sign (not ours) was about 90% covered in stickers, scratches, bullet holes and dents from rocks. This was by far the worst sign, we had attempted to refurbish. 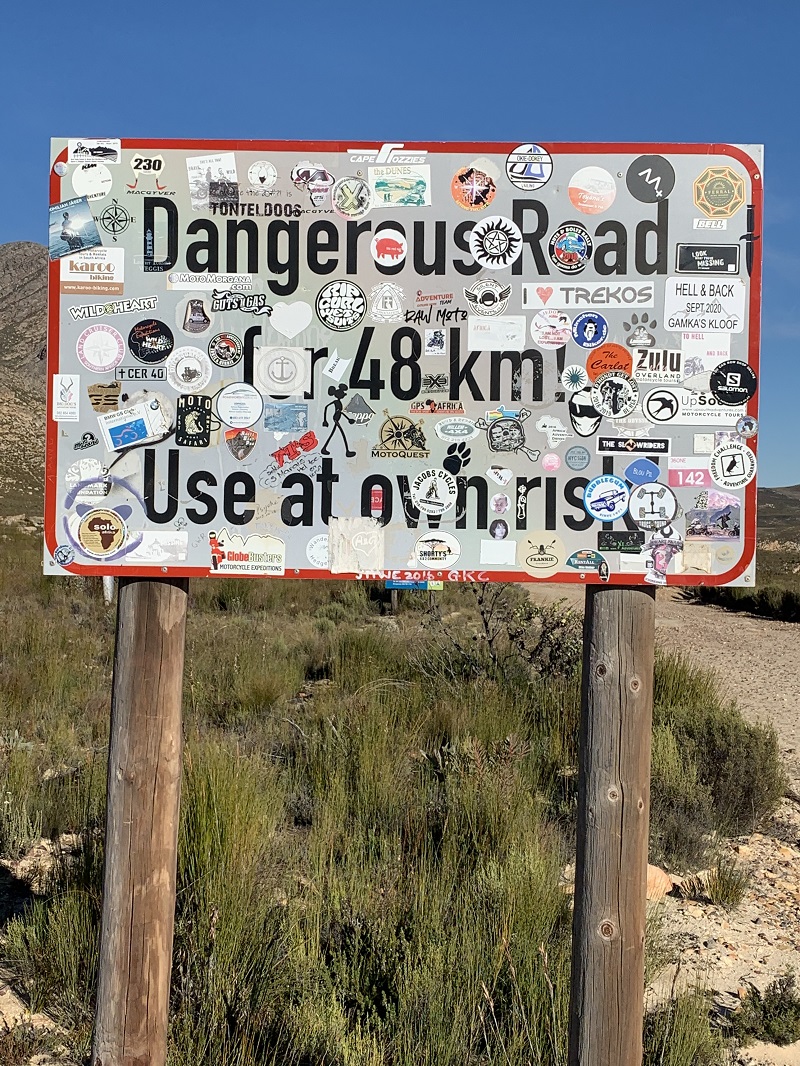 It took a full two hours to remove all the stickers, fix all the damaged paint (impossible to do it all as in reality the entire sign needs to be replaced (at around R20,000 for the sign and installation costs). If only people that put the stickers and graffiti on the signs realize how much damage they cause.

Up close it didn't look great, but from a few metres away, a whole lot better than before. Nearby was another green sign showing the way to Gamkaskloof, which we also cleaned up. There is a similar one facing in the opposite direction, which we will get to on our next trip. Time was moving on as we had spent too long on those two signs. 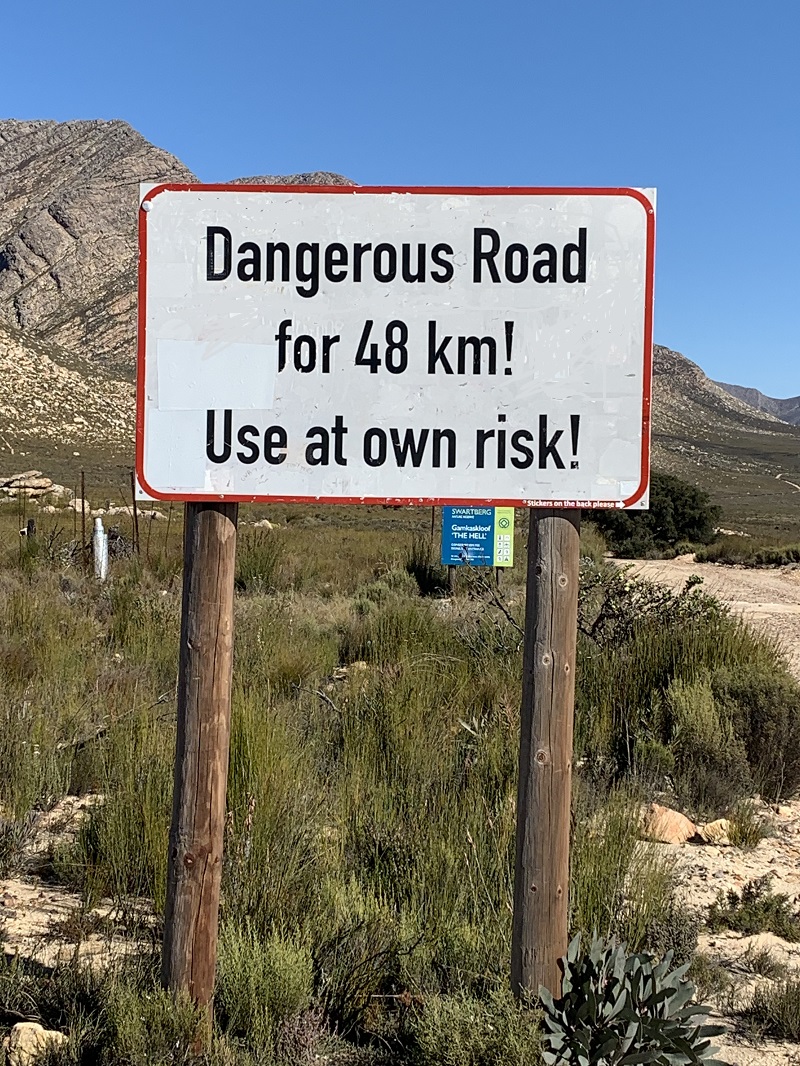 After 2 hours hard labour. Note our 'compromise' sticker (bottom right) inviting stickers to be placed on the back./ Photo: MPSA

After cresting the summit, we located our MPSA sign at the second view-point on the southern side. Most of the stickers had already been removed by friends and followers of MPSA, but the glue residue still had to be cleaned up, polish applied, new decals and finally a coating of chain lube to prevent stickers adhering in the future. It was very cold and blustery at the view-site, making for unpleasant working conditions.

Our work done and dusted, it was time to head west for Cape Town. After reaching the southern foot of the Swartberg Pass, we stopped in at Kobus se Gat, which was closed - a sign of the current lockdown times. We took the first road right (gravel) and followed the Swartberg range past tranquil farms, game lodges, several small passes and finally the fabulous Kruisrivierpoort, which has its own micro-climate and hippy sub-culture, before arriving in Calitzdorp and the R62.

We took the most direct route via Barrydale and Montagu along the R62. Roadworks in Cogmanskloof are progressing nicely and one of the two new bridges is now in use. The wait will be worthwhile and it was interesting to note that the old tunnel at Kalkoenkrantz has not been widened or tampered with at all. It is after all, a national monument.

A little further in Ashton, life remains frazzled for residents and business owners as roadworks have had a detrimental effect on most residents. With the first contractor going bankrupt, a long delay ensued as new tenders were lodged and approved, before the current contractor was able to get cracking on the completion of the project. There is light at the end of the tunnel as progress is moving along nicely now. 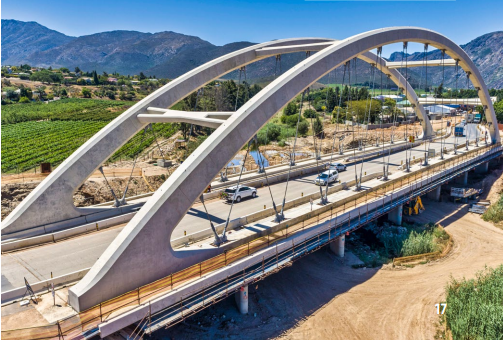 The controversial new suspension bridge will be moved sideways over the weekend of the 14th/15th August. The public have been asked to stay away from the area and all roads in and out of Ashton will be closed. Traffic from the Robertson side will be routed via Bonnievale to rejoin the R60. Residents in Montagu will need to access Cape Town via the Burgers and Rooihoogte passes and the N1.

Between September and December we plan on fitting in at least three tours. These will be the Great Swartberg Tour, which we have expanded to include an extra day and a rash of new passes and great venues. Our newest tour which we have created is the Garden Route Back Roads Tour, which we know will be a winner. (4 days/5 nights) and the ever popular Ben 10 V5 Tour will probably slotted in close to year end but before Christmas.

We also have one place available on our November Wild Coast V3 Tour.

If you want to get fresh info on our tours, please subscribe to the tours newsletter here: TOURS NEWSLETTER.

This previously unnamed pass is located on the DR1649 road, which also hosts three other passes (Kleinfontein Pass, Kleinfontein Poort & Perdebont Pass), making this road particularly attractive, but be warned, it's slow going with several farm gates to open and close. For the unhurried explorer, this one is a real gem.

Kleinfontein Poort - A short, but scenic gravel poort on the DR1649