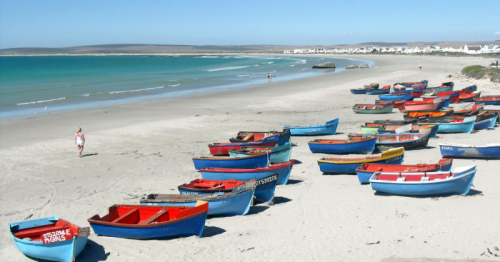 * Coldest winter in SA in decades.

Paternoster is one of the oldest fishing villages on the West Coast of South Africa. It is situated 15 km north-west of Vredenburg and 145 km north of Cape Town, at Cape Columbine between Saldanha Bay and St Helena Bay. The town covers an area of 194.8 hectare and has approximately 1883 inhabitants.

The origin of the name remains unknown. Many people believe that the name, which means ‘Our Father’ in Latin, refers to prayers said by Catholic Portuguese seamen when they became shipwrecked. It appears as St. Martins Paternoster on an old map of Pieter Mortier. Other people believe it refers to the beads that the Khoi tribe wore that were called Paternosters.

Paternoster is a sought after tourist destination and is known for lobster and the white-washed fishermen’s cottages. The remarkable coastline of jagged cliffs and white boulders makes this one of the most beautiful beaches on the West Coast of South Africa.

The area is a pillar in the South African commercial fishing industry. The town itself has a lobster factory and a newly erected Kabeljou farm, whilst the local people catch and sell herring, or draw mussels from the rocks. In the greater area are several more commercial activities, including deep sea fishing, snoek catching, abalone farming, oyster farming, canning of pilchards and mussel farming.

The oyster farm in the lagoon of the neighbouring town of Langebaan is currently the largest in South Africa. The West Coast rock lobster Jasus lalandii was enjoyed by the first Portuguese navigators. By 1902 a full-blown lobster industry was in operation, canning and exporting lobster to France in particular. The West Coast lobster industry generates millions each year and employs large numbers of the local people.

In the 1930s the first Redro factory was erected in Paternoster. Redro fish paste was developed by the Stephan family in an effort to compete with the already popular Peck’s Anchovette of Britain. It flew off the shelves when first released and enjoyed nearly three decades of uncompromising sole monopoly in the savoury spread market and is now owned by Pioneer Food Group. 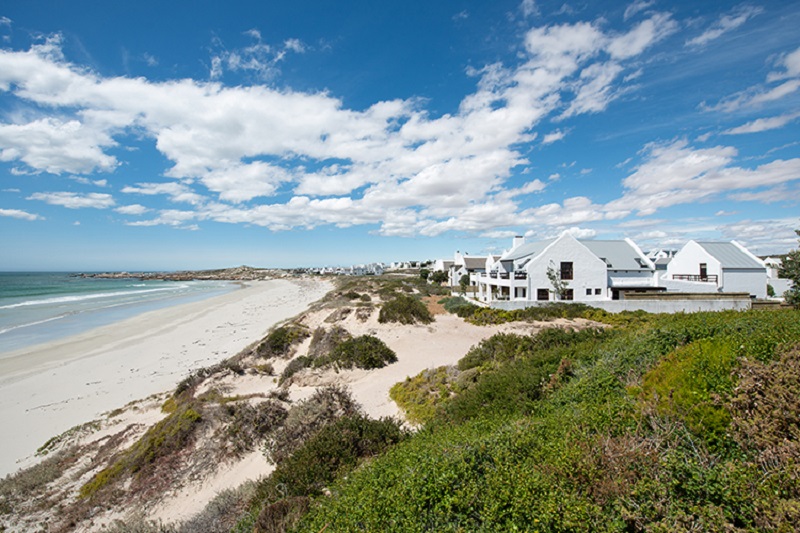 Gonana guest house in the foreground / Photo: The Inside Guide

The Cape Bokkoms have been well known in this region and has been a cheap and practical source of protein for centuries. The unique method of preparing and drying fish has grown with leaps and bounds, often for export, in response to the growing demand for the product from South Africa.

The climate is mostly known for its infrequent rainfall, dry countryside and high offshore winds. The area receives most of its rainfall during winter and has a Mediterranean climate. The climate supports the growth of the famous wild flowers that the West Coast is renowned for.

Cape Columbine light house is the last manually controlled lighthouse in South Africa. The lighthouse was built in 1936 on Castle Rock. The light cast a beam which is visible from about 50 km and is usually the first South African lighthouse seen by ships coming from Europe.

On Friday the MPSA team will be departing Cape Town en route for Kirkwood in the heart of the citrus zone of the Eastern Cape, where we will be meeting up with the rest of our guests on Saturday afternoon. Our weather forecast looks excellent with daily temperatures in the low to mid 20's but the nights are still chilly ranging between 3 and 7C. We will do our best to file daily reports on the trip where we will share photos and videos on our Facebook page.

Our social media efforts have paid off handsomely with our Facebook page having reached 80,000 followers and a daily growth rate over the past weekend of over 1000 new followers per day. Our thanks to all of you that supprt the page. We have doggedly stuck to our recipe of no politics, religion or bad news (and that includes Covid). There are very few successful social media that thrive on positivity alone and as we all know - bad news sells. We seem to be doing most things right most of the time. We are anticipating 100,000 followers by the end of 2021. 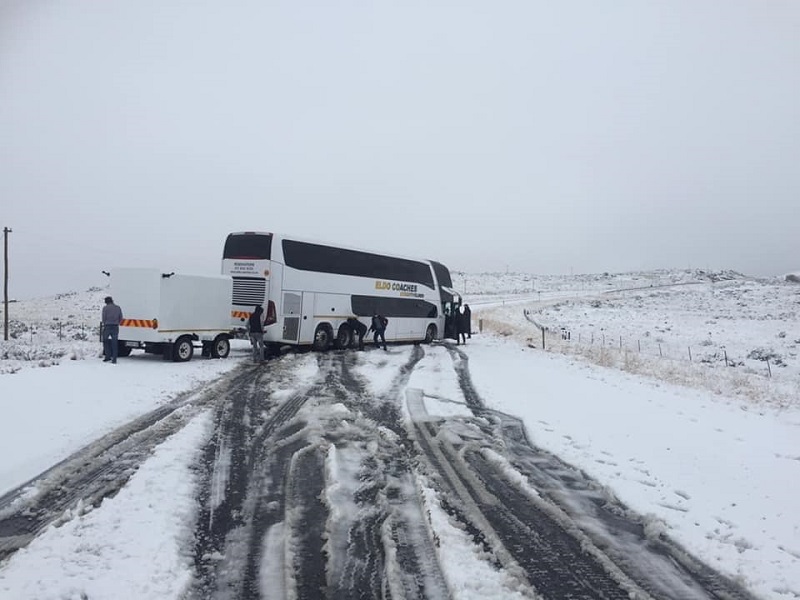 As always we recommend drivers to err on the side of safety. Know your vehicle's capabilities as well as your own. Most South Africans haven't got a clue as to how to drive on snow and are ill prepared to cope with matters when their vehicles lose traction.

The winter of 2021 has seen several records broken. Some of them older than 50 years. The volume of snow that has fallen over the Malotis in Lesotho, the Drakensberg, nearly all the higher mountains of the Central Karoo, Outeniquas, Langeberge, Swartberg range and most of the mountains of the Western Cape as well, is extraordinary.

With the snow comes fun as well as drama, with vehicles being stranded on the Swartberg Pass (and having to be rescued) after motorists decided to ignore the road closure signs; buses jacknifing with big trailers on the Lootsberg Pass; long queues of heavy trucks blocking some of the ice covered passes with zero traction. Afriski and the Rhodes area have seen heavy snowfalls and the Tenahead Lodge looks like it's straight out of a Swiss fairytale.

Our featured pass this week is the little known Mkomazi Pass in KZN. This is a new pass that has just been added to our database and was recently filmed by our associate up north, Murray Cubitt. The pass is part of the R56 and connects Ixopo in the south with Richmond in the north. The road is currently (2021) under refurbishment and is generally in a fair condition. Most people will remember  the Mkomazi River as the Umkomaas and we have published some fascinationg history of the Umkomaas Canoe Marathon (known simply as the Umko), which includes the legendary Dr. Ian Player

Silly Questions: "What is the speed of darkness?"