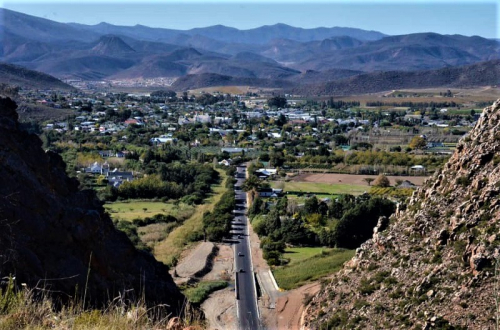 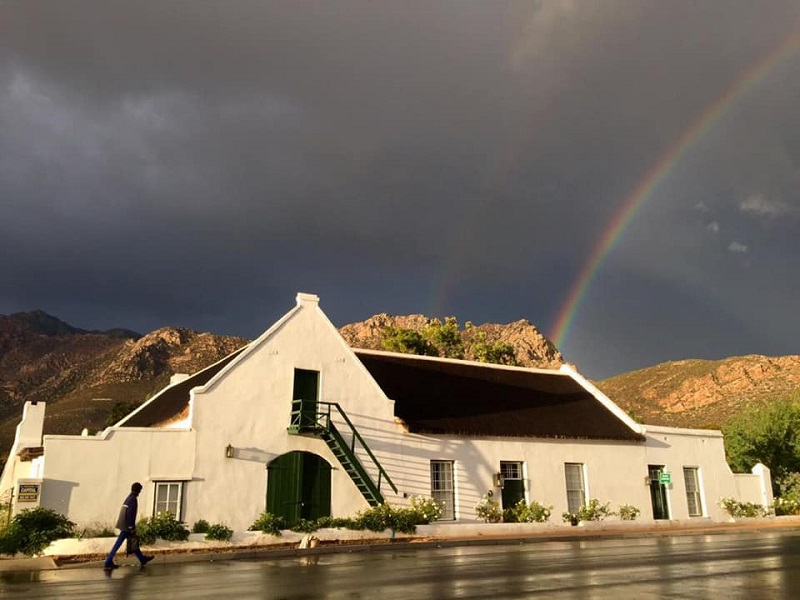 Montagu banknotes were printed and issued from 1861, up until the demise of the bank in 1868. Samples of notes are on display at the museum. In 1877 Thomas Bain built the Tunnel and the new road through Cogmans Kloof. Between 1902 and 1985 the Brink Brothers enterprise was of major significance to the town. Their activities included general dealers, bottling work, a canning factory, dried fruit production and a department store.

During 1936 Montagu was declared a health resort. This resulted in an influx of wealthy people purchasing holiday houses. At one time during the early years, Montagu boasted 5 millionaires! In 1941 the Montagu Muscadel Co-Operative was formed with fifteen members present at the first meeting. The development can be gauged by the fact that in 1944, 800 tons of grapes were processed; by 1991 the figure had grown to 11,000 tons.

In 1950 Montagu hosted the first South African Wine Festival. With much trepidation and debate the committee members assured the protesters that drinkers will not be able to make themselves drunk during the periods the wine will be served. "We will not have dishonour brought to our product" ... and all went well. 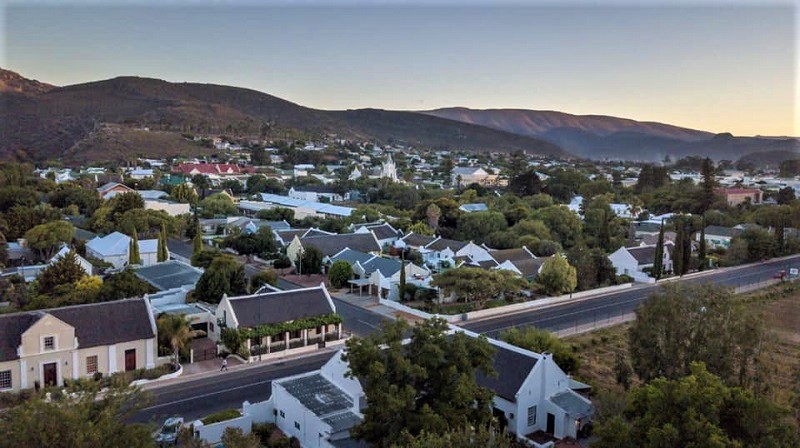 Montagu in the pastel light of dawn / Marchelle van Zyl

Today Montagu remains an attractive "dorp" dotted with many historical buildings. A slow drive through the town reveals the rich cultural heritage. Rock climbers, hikers and mountain bike enthusiasts flock to the town over weekends as do campers. The town has a well laid out caravan park and several private enterprises have set up excellent camping facilities on the outskirts of the town, namely Doringlaagte and Guano Caves with its heated pools.

This perfect getaway in the Langeberg, near the Robertson Wine Valley and not far from the Breede River Valley, takes some time to explore. The beautiful town of Montagu, famous for more than its Hot Springs is the perfect retreat for eco, wellness and adventure sports, as well as golfing holidays, wine and food! Montagu is situated on Route 62 approximately 2 hours' drive from Cape Town and leads into the Little Karoo. Look forward to a whole new world of magic and sensual pleasure as you pop through the hole in the wall at Cogmanskloof with its amazing geological folds, faults and a British fort from 1899. Accommodation in Montagu for all tastes is as diverse as Montagu itself.

Ashton Arch bridge makes it into the history books

The newly completed Ashton Arch is South Africa's first concrete tied arch bridge constructed using a transverse launching method. It represents a proud monument for the Western Cape Department of Transport and Public Works, the people of the Ashton-Montagu area, and all the contractors, labourers and suppliers who were involved in the project. 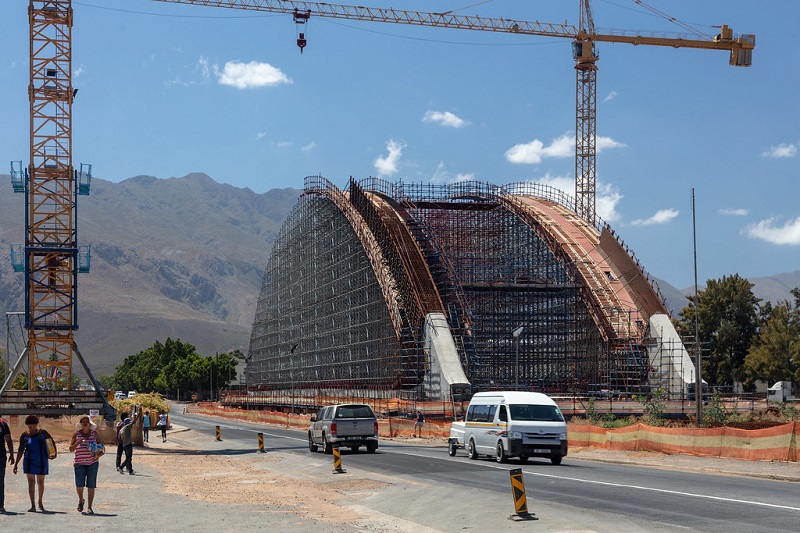 Progress on the bridge came to a halt when Basil Read Construction went into liquidation / Photo: Ashton-Arch.co.za

The New Ashton Arch Bridge has been constructed in the town of Ashton, Western Cape, on Trunk Road 31 Sections 2 (start of “Route 62”, an important tourist destination and national road) crossing the Cogmanskloof River. The bridge replaces an existing multi-arch bridge, built in the 1930's, which did not fulfil its functional requirements, inter alia service life, width and hydraulic capacity, anymore.

The new tied-arch bridge comprises a cable-supported concrete deck which spans 110 metres between supports with arching ribs rising 22 metres above the asphalt road surface. The superstructure, which was completed mid 2020 adjacent to the existing road-alignment, was launched transversely into its final position onto the adjacent recently completed substructure on 14th August 2021, a first of this kind of construction in Africa and was live-streamed. 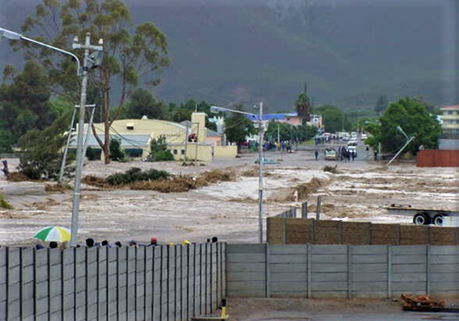 Many people commented negatively about the bridge, citing corruption, waste of money, bridge too big for a small town, tender fraud, etc. However nothing could be further from the truth. This is after all, the era of fake news mostly spread by negative people.

The entire roadworks starting on the western side of Ashton and ending in Montagu started in 2015. The only problem came about when the original contractor, Basil Read Construction, went bankrupt. There was a delay of about 18 months as new tenders had to be submitted, with the successful one being awarded to Haw & Inglis.

The long construction period (justifiably) caused some anger and bitterness - especially from local residents and small business owners who have experienced revenue losses. Adding Covid and a poorly performing economy into the mix has made the situation even worse.

We have been doing regular reports on the construction over the years, which has always produced many negative comments. Now that the bridge has been successfully launched into its new permanent position, the tide of opinion is turning, as people begin to understand the importance of the bridge on a major commercial and tourism route and at MPSA we are willing to predict that the new bridge will put the little town of Ashton firmly on the tourism map as people will want to experience driving over it.

It's important to understand that the bridge was not built for the town of Ashton, but as part of the reconstruction of the R60 route. During flood episodes the old bridge was regularly over-toppped, resulting in long traffic delays - not to mention the flooding of the local fruit canning factory, which is a major employer in the area.

The objective of this project was to reconstruct parts of Trunk Road 31 Section 2 and 3, from Ashton to Montagu (start of tourist Route 62) to a higher standard in order to improve traffic and pedestrian safety as well as improve flood capacity of bridges and resistance to overtopping of the road at several problem locations. 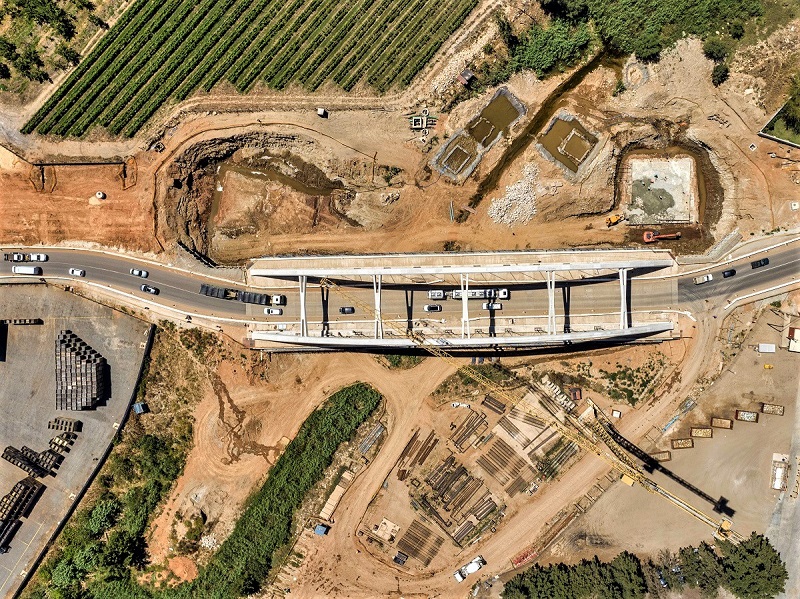 Aerial view of the new bridge in its temporary position and the old bridge demolished / Photo: Ashton-Arch.co.za

This included the Cogmanskloof River crossing in Ashton which has experienced substantial flood damage on several occasions.

The original earth-filled multiple arch bridge at this crossing was constructed in 1930 for single lane traffic. In 1950 a substantial structural retro fitment that allowed two-way single carriageway vehicular and pedestrian traffic was undertaken. The superstructure was modified to a cast in-situ beam and slab configuration that maintained portions of the old arch superstructure, including arch-profile and related hydraulic opening configuration. The 1950 upgrade was however retained at an elevation which still resulted in overtopping with enhanced flood risk to the road and adjacent residential properties. The high river debris load combined with deep deck and wide solid wall piers, orientated at unfavourable skew angles relative to the flow direction, exacerbated the effects of flooding. 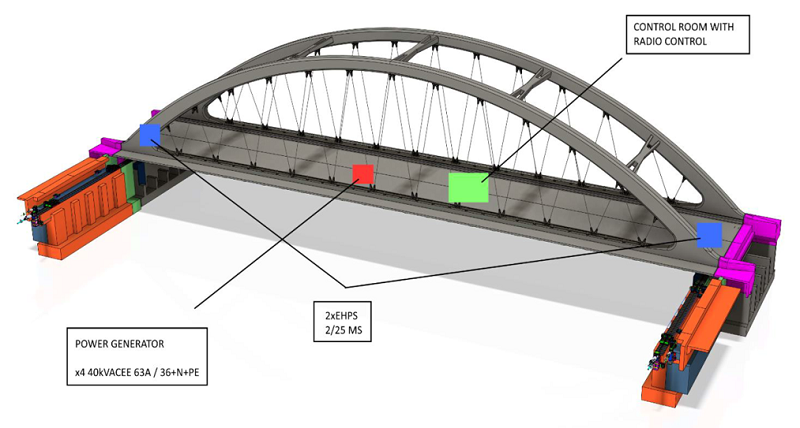 How they did it / Diagram Aecom Engineering

Key considerations for the latest upgrading was to minimize flow restriction and improve the available free board within the restrictions of adjacent properties and road alignment levels. Through an economic analysis, the technical options for the river crossing and construction strategy were evaluated with due consideration of the impact of construction strategy on road user costs.

The design which was finally adopted consisted of a single span (110m) concrete tied arch solution with a deck suspended by stay cables which accommodates four traffic lanes and two walkways. This largely eliminated the possibility of debris build up and provided the shallowest deck depth option (key considerations).

We think the bridge is an asset to Ashton, the region and South Africa. Here's to progress! Congratulations are in order to Haw & Inglis, AECOM Engineering and the Western Cape Government. 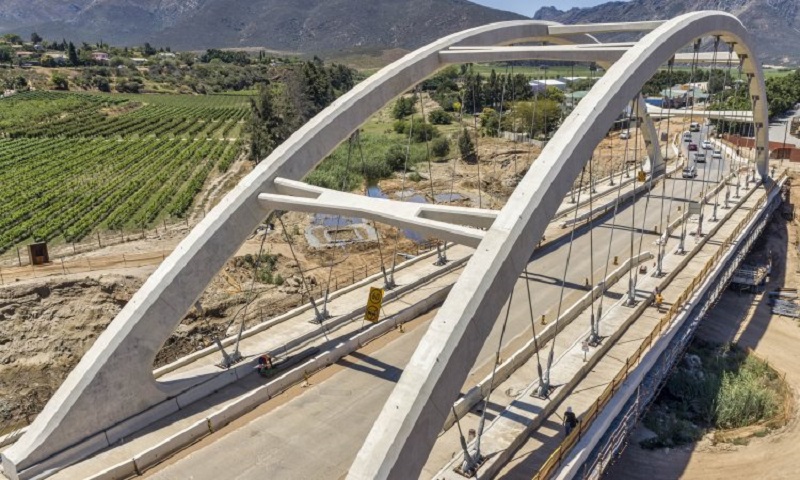 The new bridge before launching it into its new position / Photo: Ashton-Arch.co.za

We head over to the Drakensberg and the Ukahlamba National Park, as we introduce you to great gravel pass that can be driven in any vehicle. The Nzinga Pass is a long gravel pass located roughly midway between Nottingham Road and Himeville on the Lotheni Road, The road is generally in a reasonable condition and is suitable for all vehicles. There are no shortages of bends on this pass - 43 of them in total. Ten of the corners are in excess of 90 degrees, but there are no true hairpins.

Tail Piece: "Fishing is something between a sport and a religion"