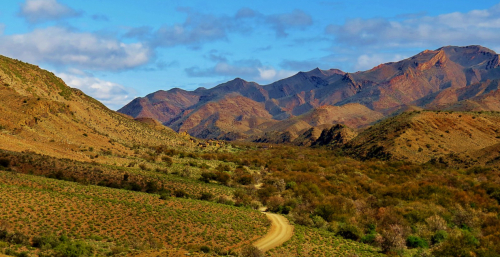 With the relaxation of lockdown levels nationally, the timing is perfect for booking on a tour and getting out of the cities.

We have four spots available on this tour. Join us for four days and five nights of incredible scenery in and around the Swartberg range. We will take you over passes you've never seen before, through country landscapes that will beguile and captivate you. Escape all the Covid negativity in the fresh country air and celebrate the arrival of summer with us. For the full itinerary, pricing, online booking and other information, take the link: Swartberg Classic Tour 2021

The two cancellations which we had, were quickly resold, so this tour is fully booked again. For those who couldn't make it, we will be running another one in the first half of 2022. To ensure you get early notification of tours, it's best to subscribe to the tours notices on our home page.

This week we take a closer look at the town of Burgersfort.

Although it is officially situated in the scenic province of Mpumalanga, Burgersfort is located very close to the Limpopo border too. This part of South Africa is characterised by rolling vistas of unspoilt countryside, lush plantations, and verdant valleys. Picturesque backdrops abound, and make for beautiful holiday photographs and idyllic settings against which to celebrate major events.

Burgersfort is a small town in the Spekboom River Valley, taking maximum advantage of these pretty surrounds. As such, it is home to a plethora of plant species, as well as many birds and other animals. This makes it a delight for outdoor enthusiasts and lovers of all things natural.

Burgersfort and its surrounds have a rich history. The town was established around a hexagonal fort that was built in 1876 and 1877, during the Second Bapedi War. This was a war between the Bapedi people of Chief Sekhukhune (the largest North-Sotho language group), the British and the Boers (farmers who had their origin mainly in Holland).

Lots of adventure sports on offer in the area / Photo: www.southafrica-info.co.za

The town was named after the South African President, TF Burgers. Today, one of the popular tourist attractions of the town is the Battlefield of Sekhukhune’s Kraal, which marks the spot at which the British attacked the chief’s Pedi people. It continues to hold a haunting resonance for those who visit.

In addition to its natural prettiness and its history, Burgersfort is also significant for being an important contributor in terms of platinum mining.

Towns and villages close to Burgersfort include Lydenburg (60 kilometres), Steelpoort (16 kilometres) and Madiseng (11 kilometres). Lydenburg is frequented by avid fly-fishermen, and continues to be an important spot for agriculture and mining.

With our Swartberg Classic Tour coming up, what better than to open up one of the passes of the tour. We take a closer look at the history of the Bosluiskloof Pass.

This is one of the most spectacular gravel passes in the Western Cape offering stunning scenery of craggy mountains, vertical rock walled poorts, old-school engineering, game spotting, birdlife and a fabulous 4 star lodge to ease weary travellers into the bushveld way of life. The pass has 60 bends, corners and curves compressed into its 7,6 km length with an average gradient of 1:13 which is remarkable considering that the lower part of the pass where it becomes a poort is fairly flat. Yet there is no point on the pass which is excessively steep. There are some sections that reach 1:6 so this road with it' steep unguarded drop-offs requires focused attention from drivers.

The captivating vistas from the summit / Photo: MPSA

Firstly it made the road a dead end as there was no way around the new dam and secondly it spelt the end of the farming community in the Gamkaskloof, as the new road bulldozed eastwards through the Gamkaskloof gave this community access to Oudtshoorn and Calitzdorp. They left the kloof in a steady trickle until there was no-one left. That is one of the negative sides of progress.

This week's paraprosdokian: "Since light travels faster than sound, some people appear bright until you hear them speak"