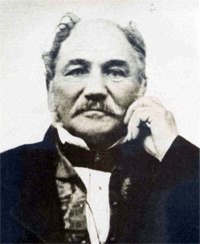 Andrew Bain had 11 children, of whom his famous son, Thomas Charles John Bain, was the second son and the seventh child. Many people confuse him with John Thomas Baines (1820-1875) - a traveller and explorer in South Africa who was also a prolific artist who died in Durban in 1875. Note the spelling of his surname is different to our two padmaker heroes. For the purpose of this story, we can put Baines the artist to one side.

Born in Graaff-Reinet, to Andrew Geddes Bain and Maria von Backstrom, on 29th September 1830, Thomas Bain died, after a full and energetic life, on his 63rd birthday, 29th September 1893, at his last residence “Woodside” in Rondebosch, Cape Town.

On 26th June 1854 Thomas married Johanna Hermina de Smidt, ninth child of Willem de Smidt, the Secretary to the Central Road Board, later to become a Member of the Cape Parliament. They had a long and happy marriage, being devoted to one another and to their thirteen children.

Johanna's brother, Adam de Smidt, was also a road builder and worked for many years under Thomas' supervision. The two men did not see eye to eye - a result of a dispute in the routing of the 7 Passes Road, which turned into bitter acrimony, which would last a lifetime. The family followed Thomas where his work took him, and this entailed moving every few years, so they had nothing which could be called a “settled residence” until they bought “Woodside”, standing in 90 acres of ground in Rondebosch, a suburb of Cape Town, for £1,300 in the 1880’s.

Thomas was essentially a quiet and gentle man, beloved of his family. At the same time he was able, as his works attest, to control large construction crews in remote areas and, when more senior, to guide and control work on a number of sites, often hundreds of kilometres apart. He was religious and a teetotaller.

Thomas was basically a road engineer and surveyor, with strong geological links. He was apprenticed to his father for five years on the construction of Michell’s Pass and Bain’s Kloof Pass, where after he sat for and passed top of the entrants the examination in Civil Engineering, set under the direction of the Colonial Engineer and the Superintendent-General of the Colony. He obtained his AMICE in 1877. He earned the nickname of "the man with the theodolite eye" for his uncanny ability to visualise the perfect routing for a pass with the naked eye.

In 1848 he was appointed an Assistant under the Central Road Board, and Superintendent of Convicts; then from 1854 Inspector of Roads for the Western Province, holding on several occasions the appointment of Visiting Magistrate of the convict gangs employed under his supervision. In 1873 he was lent to the Railway Department for eighteen months as District Engineer in charge of construction and he also surveyed three proposed railway routes. He then returned to the Road Office of the Department of Public Works until 1888, when he was appointed Irrigation and Geological Surveyor of the Colony.

Cullinan is a small town in the Gauteng province of South Africa. It is located 30 km east of the city of Pretoria along the diamond route and is heavily reliant on tourism and the mine that dominates the skyline. The town is named after diamond magnate Sir Thomas Cullinan.

In 1898 Sir Thomas Cullinan was handed a three carat diamond found along a farm fence. He studied the area and came to the conclusion that the diamond had been washed down from a nearby hill. Sir Cullinan made an attempt to buy the land from the owner, Joachim Prinsloo, but did not succeed. After Prinsloo's death, he was able to purchase the land for £52,000 from Prinsloo's daughter. The Cullinan kimberlite was discovered in 1902 and in 1903 open pit mining commenced. The mine was named the Premier mine.

On 25 June 1905, the famed Cullinan Diamond, the largest in the world at 3,106 carats (621.2 g), was discovered by Frederick George Stanley Wells, surface manager of the Premier Diamond Mining Company. It was bought by the Transvaal government and presented to King Edward VII.

The town of Cullinan owes its existence to the diamond mining in this area, much like Kimberly in the Northern Cape Province of South Africa.

The heritage sandstone cottages of Cullinan in Gauteng province make wandering around this famous town a lovely experience, with many of the old buildings now playing host to restaurants and shops.

You can take a tour of its mines and mining area. The rugged terrain surrounding Cullinan is also popular with more adventure minded visitors, with activities like ziplines, rock climbing, hiking and mountain biking.

We discuss the technical aspects of the Carlisleshoekspruit Pass and relate the story of the day we lost a Land Rover in the river.
CLICK HERE TO LISTEN.

We feature a pass recently added to our database this week. This is the biggest of three back to back passes along the Lotheni Road and is not unsurprisingly named the Lotheni Pass.

The other passes are the Bucklands Pass, the Nzinga Pass and the oddly named Ping Pong Cuttings. The Lower Lotheni Road offers wonderful scenery as it follows the foothills of the Drakensberg, offering tranquil scenery and a glimpse of rural life as several villages are traversed.

Being a gravel road, the surface condition is subject to weather conditions and maintenance schedules. Always expect rough sections with ruts, washaways and loose gravel. Other dangers include erratic local driver behaviour, livestock on the road, minibus taxis and pedestrians.

Stick to the speed limit and be particularly careful at blind rises and sharp corners, where some drivers tend to drift onto the wrong side of the road.

Lundy's Hill (R617) - Lundy's Hill is a major pass located on the tarred R617 trunk route between Howick and Bulwer. It's 21 km long and contains 35 bends, corners and curves, most of which are easy.

Paraprosdokian of the week: "War does not determine who is right, only who is left" ~ Sir Winston Churchill