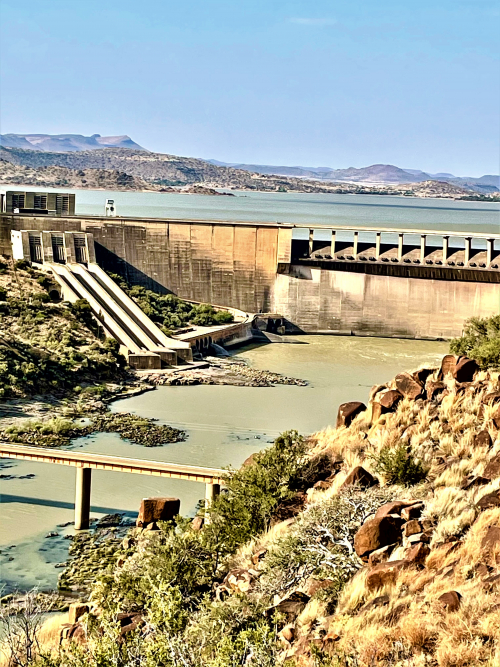 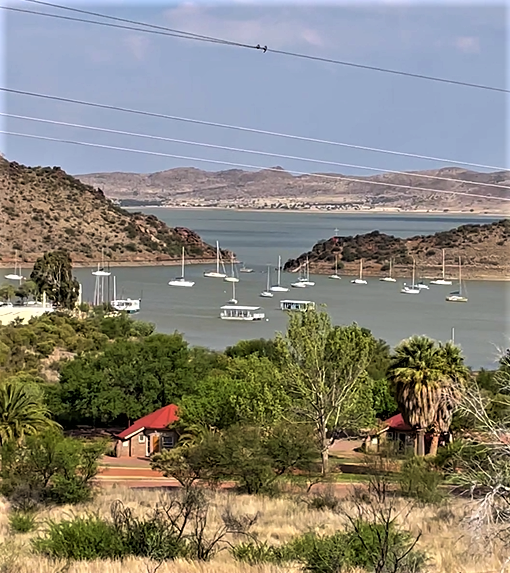 Part of the whole design was to provide water to the western parts of the Eastern Cape, which spawned the Orange-Fish Tunnel and the Sundays River Irrigation Scheme.

The structure is a concrete gravity-arch hybrid dam. This design was chosen as the gorge is too wide for a complete arch, so flanking walls form gravity abutments to the central arch. It was built by Dumez, a French construction company.

The concept was first put on the table as far back as 1928 and finally completed in the 1960's. There's a memorial near the wall that commemorates several workers who lost their lives during the construction phase when they became buried under tons of liquid concrete.

The safety system had sirens in place which would be activated at each concrete drop, allowing workers below to get clear of the danger. It proved not be a 100% effective system as some of the workers to this day remain buried under thousands of tons of concrete.

You will find a variety of accommodation in Gariep Dam. The Gariep Dam area is known for its quiet and relaxed atmosphere fresh air and beautiful stars at night. It is a key attraction with tourists all over South Africa and the focus is on water sport and nature. Gariep Dam is the biggest Dam in South Africa and attracts fishing enthusiasts and boat lovers. It is surrounded by nature reserves with wildlife running on open plains.

The known 165 km Gariep Route runs around the dam and it includes a stop at the 80km Oviston tunnel that is one of the longest of its kind in the world, with the 1km long bridges running over the Orange River near Bethulie. The mass graves from the concentration camps had to be exhumed once the dam filled and were moved to higher ground. It's a sobering experience to stand and read all the names of the Boer families that lost their lives at the hands of the British authorities.

On the geological side, Thomas was from time to time engaged in making collections of reptilian remains from the Locustrine beds of the Karoo for the British and Cape Museums, and reporting on the mineral resources and discoveries of minerals in the Colony, such as the Knysna, Prince Albert, Barkly West and Namaqualand Gold Fields, and the Coal Fields of the Eastern Province and the Free State. He also discovered new botanical species, collected other fossils and artefacts, made copies of pre-historic rock art – and played a variety of musical instruments.

A dedicated and extremely conscientious man, he had but one month’s leave in his 46 years in the Public Works Department. The records of his works, his reports to his Chief Inspector, and the near-perfection of the surveys and other maps which he produced bear witness to the excellence of his professional work.

Shortly before his death Thomas undertook a 1,600 kilometre trip, travelling in a small ox cart through the hot and dry interior regions to investigate possible irrigation sites near Upington on the Orange River. This most arduous trip appears to have further undermined his health, which was already suffering from the strain of his work and from worries about the (he considered inappropriate) reorganisation of his Department. He never recovered, and was bed-ridden for the last month of his life, gradually fading away. He was buried in the churchyard of St Thomas’ Anglican Church in Rondebosch. Plaques have been erected in his honour at five different places around the Cape, and his grave stone is housed in the Cultural History Museum in Cape Town.

When Thomas and Andrew Bain commenced working for the Central Road Board there were only three engineered mountain passes in the country, one of which Andrew had built.

It can be said that the Bains, in conjunction with the Colonial Superintendent of Works and Surveyor-General Major Charles Michell, initiated the great age of road-building in the Cape. Thomas Bain especially has made a contribution to road engineering in South Africa which must rank among the greatest made by any engineer.

We chat about the !Gariep Dam and the Bain legacy). Click to listen.

Lundy's Hill is a major pass located on the tarred R617 trunk route between Howick and Bulwer. It's 21 km long and contains 35 bends, corners and curves, most of which are easy. The altitude variance of 505m converts into an average gradient of 1:41 with the steepest parts measuring in at 1:9. This pass is unkindly referred to a "hill".

The pass has a classic inverted vertical profile, typical of a pass that descends down to a river and ascends up the other side. The river in question is the Umkomaas River (Mkhomazi). The pass provides access to several rural villages, where the scenery is fabulous, especially during the summer months.

The pass lies along the foothills of the Drakensberg at an elevation of roughly 1400m ASL and is subject to electrical thunderstorms in summer and possible snowfalls during winter.

"Knowledge is knowing a tomato is a fruit. Wisdom is not putting it in a fruit salad"